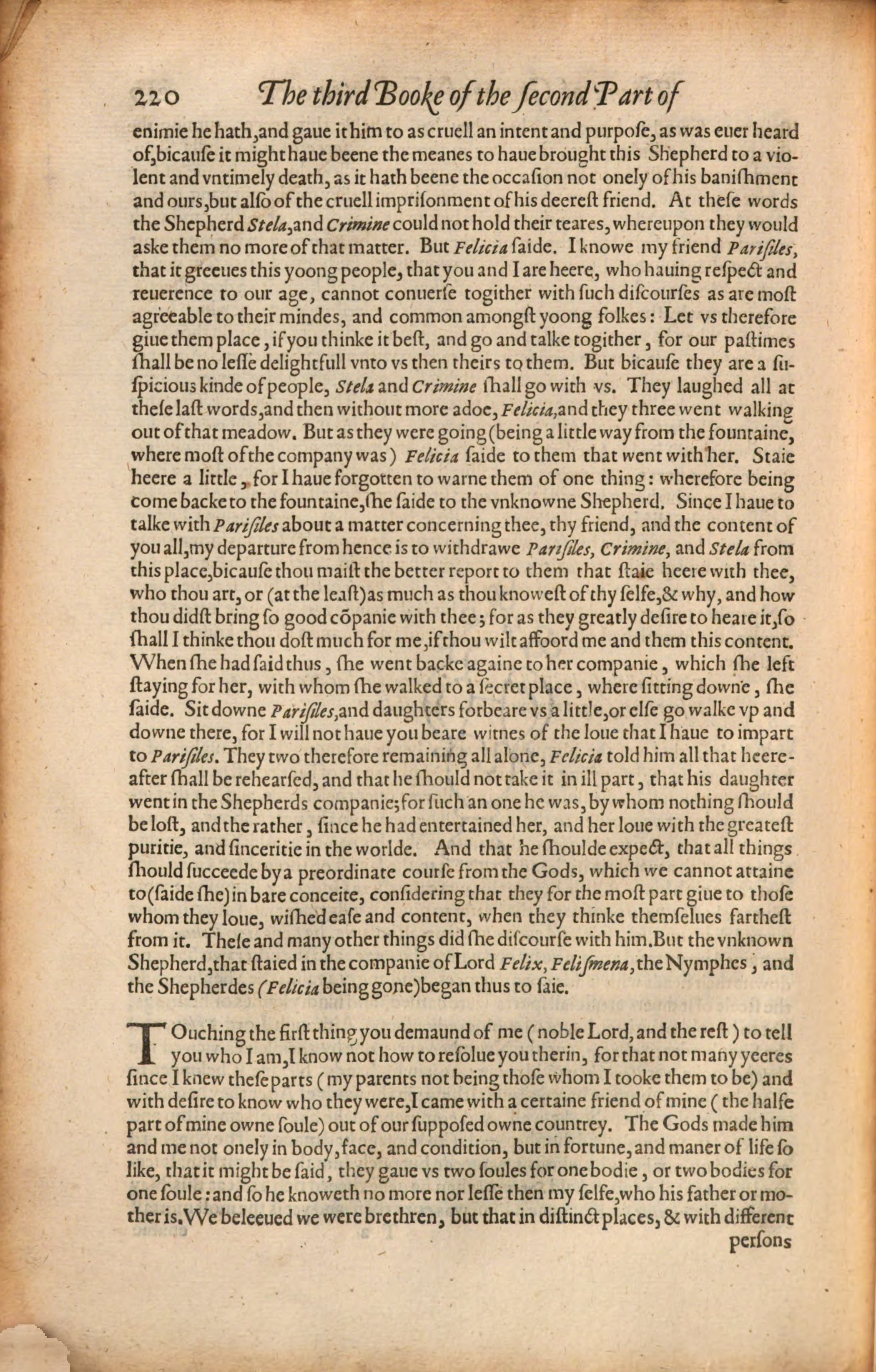 enimie he hath, and gaue it him to as cruell an intent and purpose, as was euer heard of, bicause it might haue beene the meanes to haue brought this Shepherd to a vioâˆ£lent and vntimely death, as it hath beene the occasion not onely of his banishment and ours, but also of the cruell imprisonment of his deerest friend. At these words the Shepherd Stela, and Crimine could not hold their teares, whereupon they would aske them no more of that matter. But Felicia saide. I knowe my friend Parisiles, that it greeues this yoong people, that you and I are heere, who hauing respect and reuerence to our age, cannot conuerse togither with such discourses as are most agreeable to their mindes, and common amongst yoong folkes: Let vs therefore giue them place, if you thinke it best, and go and talke togither, for our pastimes shall be no lesse delightfull vnto vs then theirs to them. But bicause they are a suâˆ£spicious kinde of people, Stela and Crimine shall go with vs. They laughed all at these last words, and then without more adoe, Felicia, and they three went walking out of that meadow. But as they were going (being a little way from the fountaine, where most of the company was) Felicia saide to them that went with her. Staie heere a little, for I haue forgotten to warne them of one thing: wherefore being come backe to the fountaine, she saide to the vnknowne Shepherd. Since I haue to talke with Parisiles about a matter concerning thee, thy friend, and the content of you all, my departure from hence is to withdrawe Parisiles, Crimine, and Stela from this place, bicause thou maist the better report to them that staie heere with thee, who thou art, or (at the least) as much as thou knowest of thy selfe, & why, and how thou didst bring so good coÌ„panie with thee; for as they greatly desire to heare it, so shall I thinke thou dost much for me, if thou wilt affoord me and them this content. When she had said thus, she went backe againe to her companie, which she left staying for her, with whom she walked to a secret place, where sitting downe, she saide. Sit downe Parisiles, and daughters forbeare vs a little, or else go walke vp and downe there, for I will not haue you beare witnes of the loue that I haue to impart to Parisiles. They two therefore remaining all alone, Felicia told him all that heereâˆ£after shall be rehearsed, and that he should not take it in ill part, that his daughter went in the Shepherds companie; for such an one he was, by whom nothing should be lost, and the rather, since he had entertained her, and her loue with the greatest puritie, and sinceritie in the worlde. And that he shoulde expect, that all things should succeede by a preordinate course from the Gods, which we cannot attaine to (saide she) in bare conceite, considering that they for the most part giue to those whom they loue, wished ease and content, when they thinke themselues farthest from it. These and many other things did she discourse with him. But the vnknown Shepherd, that staied in the companie of Lord Felix, Felismena, the Nymphes, and the Shepherdes (Felicia being gone) began thus to saie.

TOuching the first thing you demaund of me (noble Lord, and the rest) to tell you who I am, I know not how to resolue you therin, for that not many yeeres since I knew these parts (my parents not being those whom I tooke them to be) and with desire to know who they were, I came with a certaine friend of mine (the halfe part of mine owne soule) out of our supposed owne countrey. The Gods made him and me not onely in body, face, and condition, but in fortune, and maner of life so like, that it might be said, they gaue vs two soules for one bodie, or two bodies for one soule: and so he knoweth no more nor lesse then my selfe, who his father or moâˆ£ther is. We beleeued we were brethren, but that in distinct places, & with different