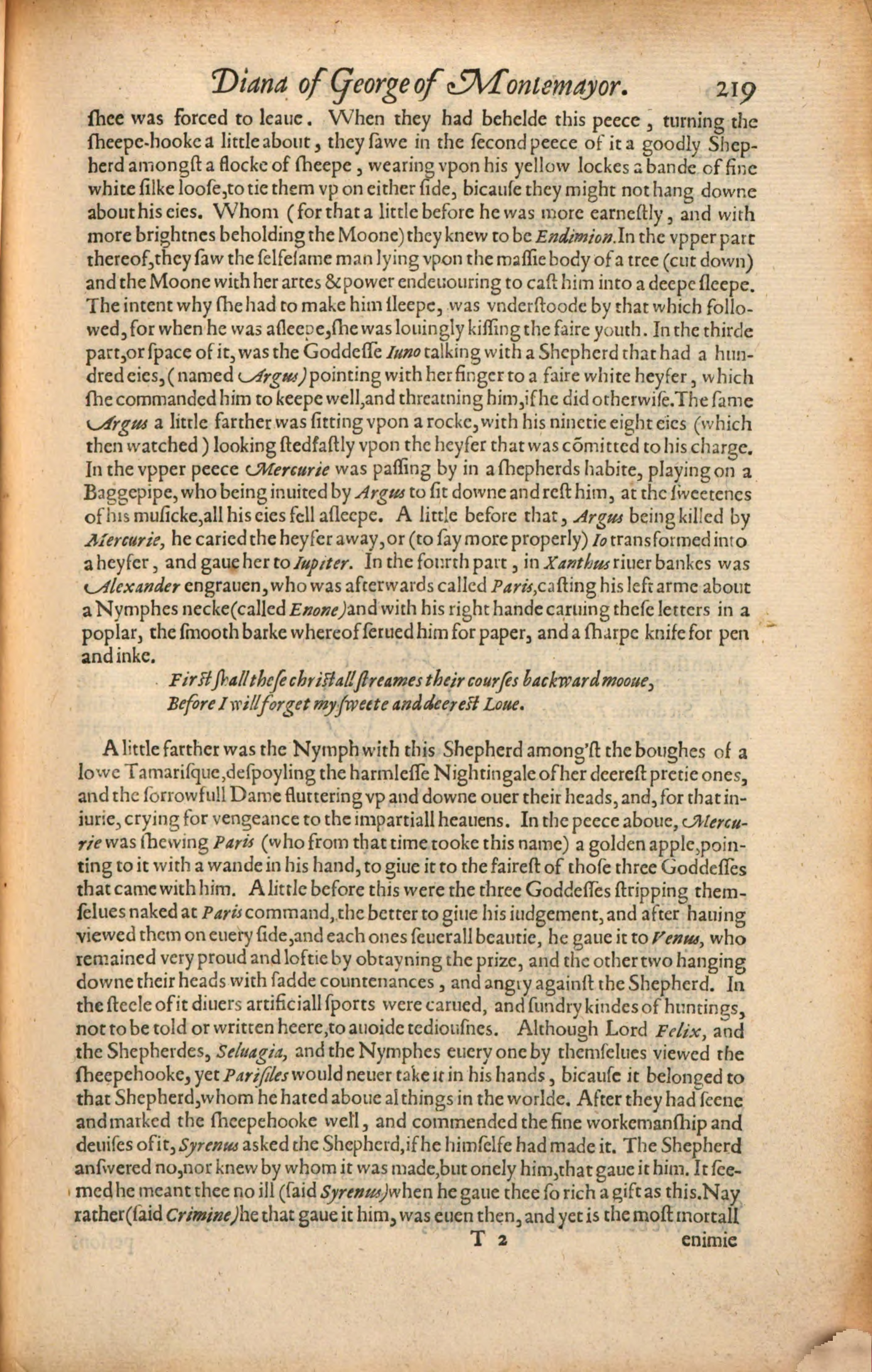 shee was forced to leaue. When they had behelde this peece, turning the sheepe-hooke a little about, they sawe in the second peece of it a goodly Shepâˆ£herd amongst a flocke of sheepe, wearing vpon his yellow lockes a bande of fine white silke loose, to tie them vp on either side, bicause they might not hang downe about his eies. Whom (for that a little before he was more earnestly, and with more brightnes beholding the Moone) they knew to be Endimion. In the vpper part thereof, they saw the selfesame man lying vpon the massie body of a tree (cut down) and the Moone with her artes & power endeuouring to cast him into a deepe sleepe. The intent why she had to make him sleepe, was vnderstoode by that which folloâˆ£wed, for when he was asleepe, she was louingly kissing the faire youth. In the thirde part, or space of it, was the Goddesse Iuno talking with a Shepherd that had a hunâˆ£dred eies, (named Argus) pointing with her finger to a faire white heyfer, which she commanded him to keepe well, and threatning him, if he did otherwise. The same Argus a little farther was sitting vpon a rocke, with his ninetie eight eies (which then watched) looking stedfastly vpon the heyfer that was coÌ„mitted to his charge. In the vpper peece Mercurie was passing by in a shepherds habite, playing on a Baggepipe, who being inuited by Argus to sit downe and rest him, at the sweetenes of his musicke, all his eies fell asleepe. A little before that, Argus being killed by Mercurie, he caried the heyfer away, or (to say more properly) Io transformed into a heyfer, and gaue her to Iupiter. In the fourth part, in Xanthus riuer bankes was Alexander engrauen, who was afterwards called Paris, casting his left arme about a Nymphes necke (called Enone) and with his right hande caruing these letters in a poplar, the smooth barke whereof serued him for paper, and a sharpe knife for pen and inke.

First shall these christ all streames their courses backward mooue,

Before I will forget my sweete and deerest Loue.

A little farther was the Nymph with this Shepherd among’st the boughes of a lowe Tamarisque, despoyling the harmlesse Nightingale of her deerest pretie ones, and the sorrowfull Dame fluttering vp and downe ouer their heads, and, for that inâˆ£iurie, crying for vengeance to the impartiall heauens. In the peece aboue, Mercuâˆ£rie was shewing Paris (who from that time tooke this name) a golden apple, poinâˆ£ting to it with a wande in his hand, to giue it to the fairest of those three Goddesses that came with him. A little before this were the three Goddesses stripping themâˆ£selues naked at Paris command, the better to giue his iudgement, and after hauing viewed them on euery side, and each ones seuerall beautie, he gaue it to Venus, who remained very proud and loftie by obtayning the prize, and the other two hanging downe their heads with sadde countenances, and angry against the Shepherd. In the steele of it diuers artificiall sports were carued, and sundry kindes of huntings, not to be told or written heere, to auoide tediousnes. Although Lord Felix, and the Shepherdes, Seluagia, and the Nymphes euery one by themselues viewed the sheepehooke, yet Parisiles would neuer take it in his hands, bicause it belonged to that Shepherd, whom he hated aboue althings in the worlde. After they had seene and marked the sheepehooke well, and commended the fine workemanship and deuises of it,Syrenus asked the Shepherd, if he himselfe had made it. The Shepherd answered no, nor knew by whom it was made, but onely him, that gaue it him. It seeâˆ£med he meant thee no ill (said Syrenus) when he gaue thee so rich a gift as this. Nay rather (said Crimine) he that gaue it him, was euen then, and yet is the most mortall