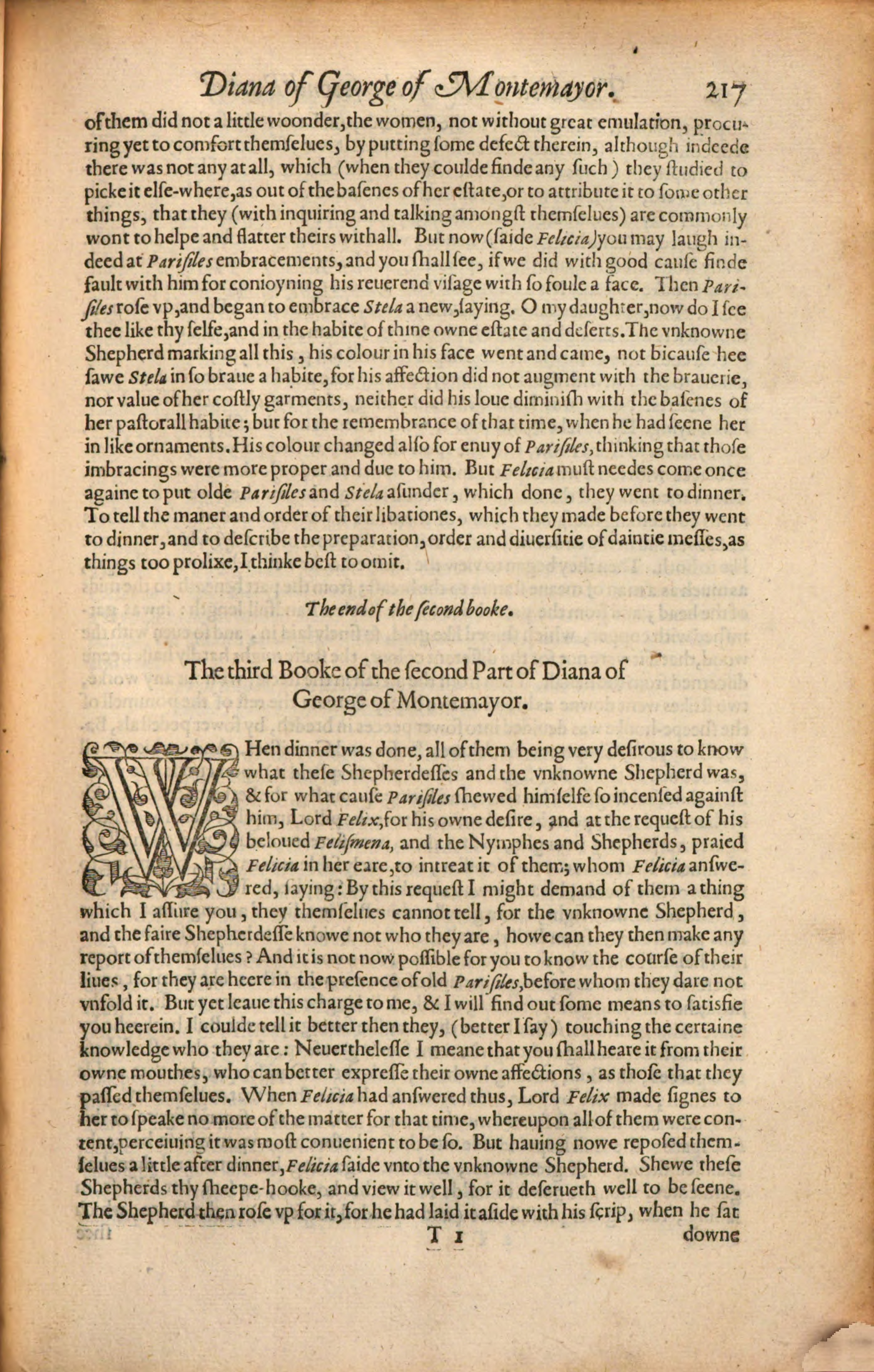 of them did not a little woonder, the women, not without great emulation, procuâˆ£ring yet to comfort themselues, by putting some defect therein, although indeede there was not any at all, which (when they coulde finde any such) they studied to picke it else-where, as out of the basenes of her estate, or to attribute it to some other things, that they (with inquiring and talking amongst themselues) are commonly wont to helpe and flatter theirs withall. But now (saide Felicia) you may laugh inâˆ£deed at Parisiles embracements, and you shall see, if we did with good cause finde fault with him for conioyning his reuerend visage with so foule a face. Then Pariâˆ£siles rose vp, and began to embrace Stela a new, saying. O my daughter, now do I see thee like thy selfe, and in the habite of thine owne estate and deserts. The vnknowne Shepherd marking all this, his colour in his face went and came, not bicause hee sawe Stela in so braue a habite, for his affection did not augment with the brauerie, nor value of her costly garments, neither did his loue diminish with the basenes of her pastorall habite; but for the remembrance of that time, when he had seene her in like ornaments. His colour changed also for enuy of Parisiles, thinking that those imbracings were more proper and due to him. But Felicia must needes come once againe to put olde Parisiles and Stela asunder, which done, they went to dinner. To tell the maner and order of their libationes, which they made before they went to dinner, and to describe the preparation, order and diuersitie of daintie messes, as things too prolixe, I thinke best to omit.

The end of the second booke.

The third Booke of the second Part of Diana of George of Montemayor.

WHen dinner was done, all of them being very desirous to know what these Shepherdesses and the vnknowne Shepherd was, & for what cause Parisiles shewed himselfe so incensed against him, Lord Felix, for his owne desire, and at the request of his beloued Felismena, and the Nymphes and Shepherds, praied Felicia in her eare, to intreat it of them; whom Felicia answeâˆ£red, saying: By this request I might demand of them a thing which I assure you, they themselues cannot tell, for the vnknowne Shepherd, and the faire Shepherdesse knowe not who they are, howe can they then make any report of themselues? And it is not now possible for you to know the course of their liues, for they are heere in the presence of old Parisiles, before whom they dare not vnfold it. But yet leaue this charge to me, & I will find out some means to satisfie you heerein. I coulde tell it better then they, (better I say) touching the certaine knowledge who they are: Neuerthelesse I meane that you shall heare it from their owne mouthes, who can better expresse their owne affections, as those that they passed themselues. When Felicia had answered thus, Lord Felix made signes to her to speake no more of the matter for that time, whereupon all of them were conâˆ£tent, perceiuing it was most conuenient to be so. But hauing nowe reposed themâˆ£selues a little after dinner,Felicia saide vnto the vnknowne Shepherd. Shewe these Shepherds thy sheepe-hooke, and view it well, for it deserueth well to be seene. The Shepherd then rose vp for it, for he had laid it aside with his scrip, when he sat