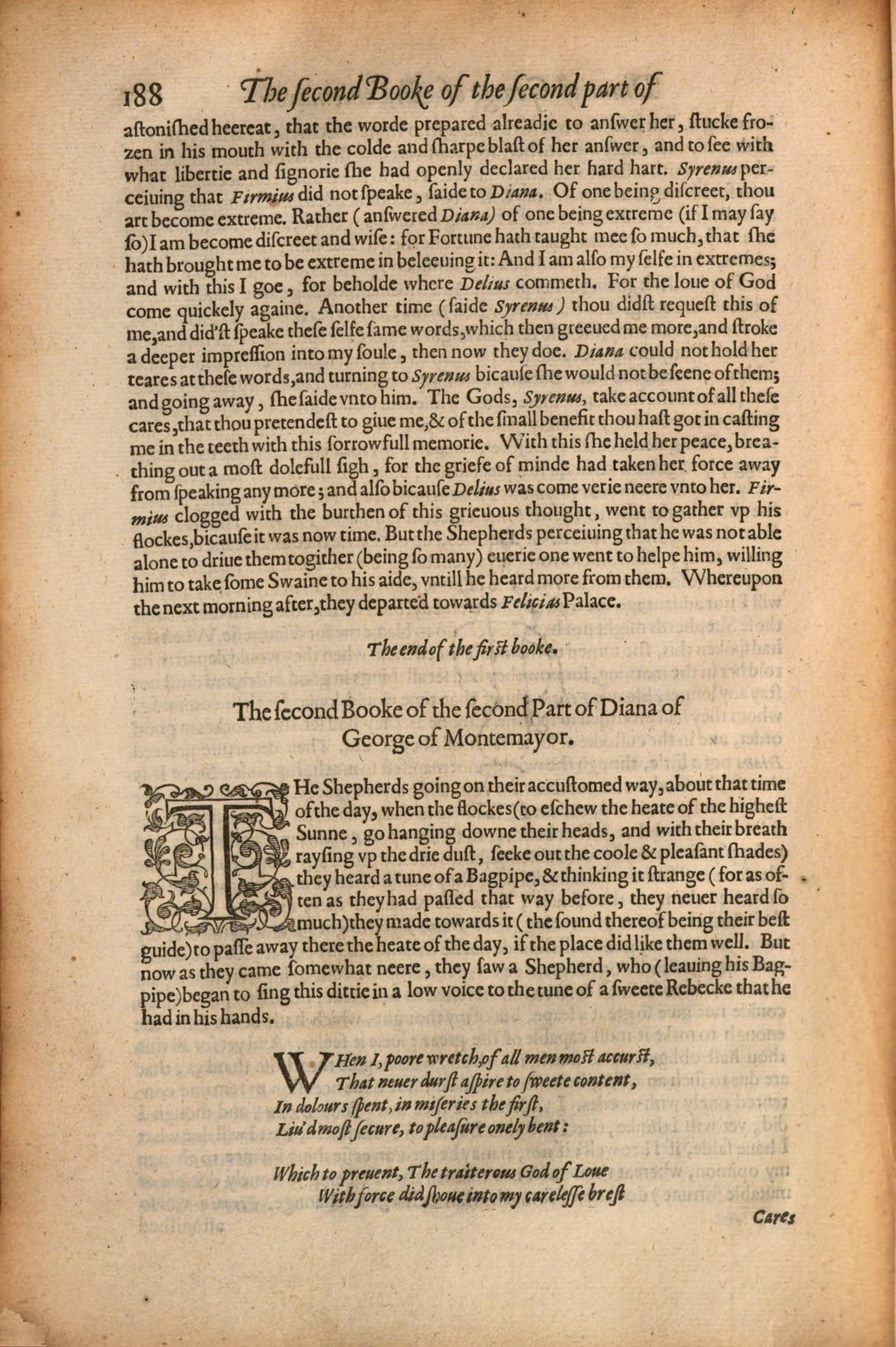 astonished heereat, that the worde prepared alreadie to answer her, stucke froâˆ£zen in his mouth with the colde and sharpe blast of her answer, and to see with what libertie and signorie she had openly declared her hard hart. Syrenus perâˆ£ceiuing that Firmius did not speake, saide to Diana. Of one being discreet, thou art become extreme. Rather (answered Diana) of one being extreme (if I may say so) I am become discreet and wise: for Fortune hath taught mee so much, that she hath brought me to be extreme in beleeuing it: And I am also my selfe in extremes; and with this I goe, for beholde where Delius commeth. For the loue of God come quickely againe. Another time (saide Syrenus) thou didst request this of me, and did’st speake these selfe same words, which then greeued me more, and stroke a deeper impression into my soule, then now they doe. Diana could not hold her teares at these words, and turning to Syrenus bicause she would not be seene of them; and going away, she saide vnto him. The Gods, Syrenus, take account of all these cares, that thou pretendest to giue me, & of the small benefit thou hast got in casting me in the teeth with this sorrowfull memorie. With this she held her peace, breaâˆ£thing out a most dolefull sigh, for the griefe of minde had taken her force away from speaking any more; and also bicause Delius was come verie neere vnto her. Firâˆ£mius clogged with the burthen of this grieuous thought, went to gather vp his flockes, bicause it was now time. But the Shepherds perceiuing that he was not able alone to driue them togither (being so many) euerie one went to helpe him, willing him to take some Swaine to his aide, vntill he heard more from them. Whereupon the next morning after, they departed towards Felicias Palace.

The second Booke of the second Part of Diana of George of Montemayor.

THe Shepherds going on their accustomed way, about that time of the day, when the flockes (to eschew the heate of the highest Sunne, go hanging downe their heads, and with their breath raysing vp the drie dust, seeke out the coole & pleasant shades) they heard a tune of a Bagpipe, & thinking it strange (for as ofâˆ£ten as they had passed that way before, they neuer heard so much) they made towards it (the sound thereof being their best guide) to passe away there the heate of the day, if the place did like them well. But now as they came somewhat neere, they saw a Shepherd, who (leauing his Bagâˆ£pipe) began to sing this dittie in a low voice to the tune of a sweete Rebecke that he had in his hands.

WHen I, poore wretch, of all men most accurst,
That neuer durst aspire to sweete content,
In dolours spent, in miseries the first,
Liu’d most secure, to pleasure onely bent:
Which to preuent, The traiterous God of Loue
With force did shoue into my carelesse brest