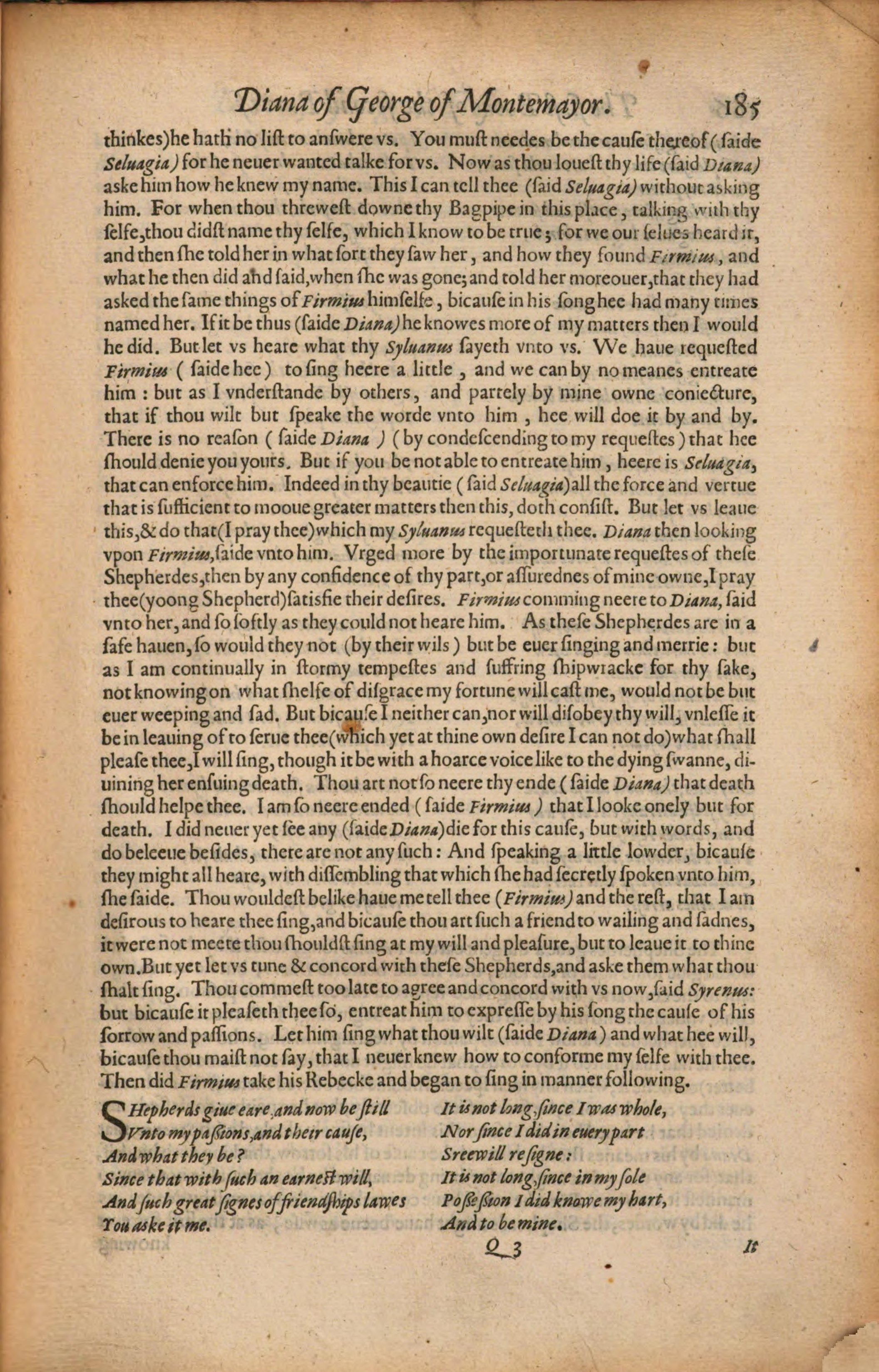 thinkes) he hath no list to answere vs. You must needes be the cause thereof (saide Seluagia) for he neuer wanted talke for vs. Now as thou louest thy life (said Diana) aske him how he knew my name. This I can tell thee (said Seluagia) without asking him. For when thou threwest downe thy Bagpipe in this place, talking with thy selfe, thou didst name thy selfe, which I know to be true; for we our selues heard it, and then she told her in what sort they saw her, and how they found Firmius, and what he then did and said, when she was gone; and told her moreouer, that they had asked the same things of Firmius himselfe, bicause in his song hee had many times named her. If it be thus (saide Diana) he knowes more of my matters then I would he did. But let vs heare what thy Syluanus sayeth vnto vs. We haue requested Firmius (saide hee) to sing heere a little, and we can by no meanes entreate him: but as I vnderstande by others, and partely by mine owne coniecture, that if thou wilt but speake the worde vnto him, hee will doe it by and by. There is no reason (saide Diana) (by condescending to my requestes) that hee should denie you yours. But if you be not able to entreate him, heere is Seluagia, that can enforce him. Indeed in thy beautie (said Seluagia) all the force and vertue that is sufficient to mooue greater matters then this, doth consist. But let vs leaue this, & do that (I pray thee) which my Syluanus requesteth thee. Diana then looking vpon Firmius, saide vnto him. Vrged more by the importunate requestes of these Shepherdes, then by any confidence of thy part, or assurednes of mine owne, I pray thee (yoong Shepherd) satisfie their desires. Firmius comming neere to Diana, said vnto her, and so softly as they could not heare him. As these Shepherdes are in a safe hauen, so would they not (by their wils) but be euer singing and merrie: but as I am continually in stormy tempestes and suffring shipwiacke for thy sake, not knowing on what shelfe of disgrace my fortune will cast me, would not be but, euer weeping and sad. But bicause I neither can, nor will disobey thy will, vnlesse it be in leauing of to serue thee (which yet at thine own desire I can not do) what shall please thee, I will sing, though it be with a hoarce voice like to the dying swanne, diâˆ£uining her ensuing death. Thou art not so neere thy ende (saide Diana) that death should helpe thee. I am so neere ended (saide Firmius) that I looke onely but for death. I did neuer yet see any (saide Diana) die for this cause, but with words, and do beleeue besides, there are not any such: And speaking a little lowder, bicause they might all heare, with dissembling that which she had secretly spoken vnto him, she saide. Thou wouldest belike haue me tell thee (Firmius) and the rest, that I am desirous to heare thee sing, and bicause thou art such a friend to wailing and sadnes, it were not meete thou shouldst sing at my will and pleasure, but to leaue it to thine own. But yet let vs tune & concord with these Shepherds, and aske them what thou shalt sing. Thou commest too late to agree and concord with vs now, said Syrenus: but bicause it pleaseth thee so, entreat him to expresse by his song the cause of his sorrow and passions. Let him sing what thou wilt (saide Diana) and what hee will, bicause thou maist not say, that I neuer knew how to consorme my selfe with thee. Then did Firmius take his Rebecke and began to sing in manner following.

SHepherds giue eare and now be still
Vnto my passions, and their cause,
And what they be?
Since that with such an earnest will,
And such great signes of friendships lawes
You aske it me.