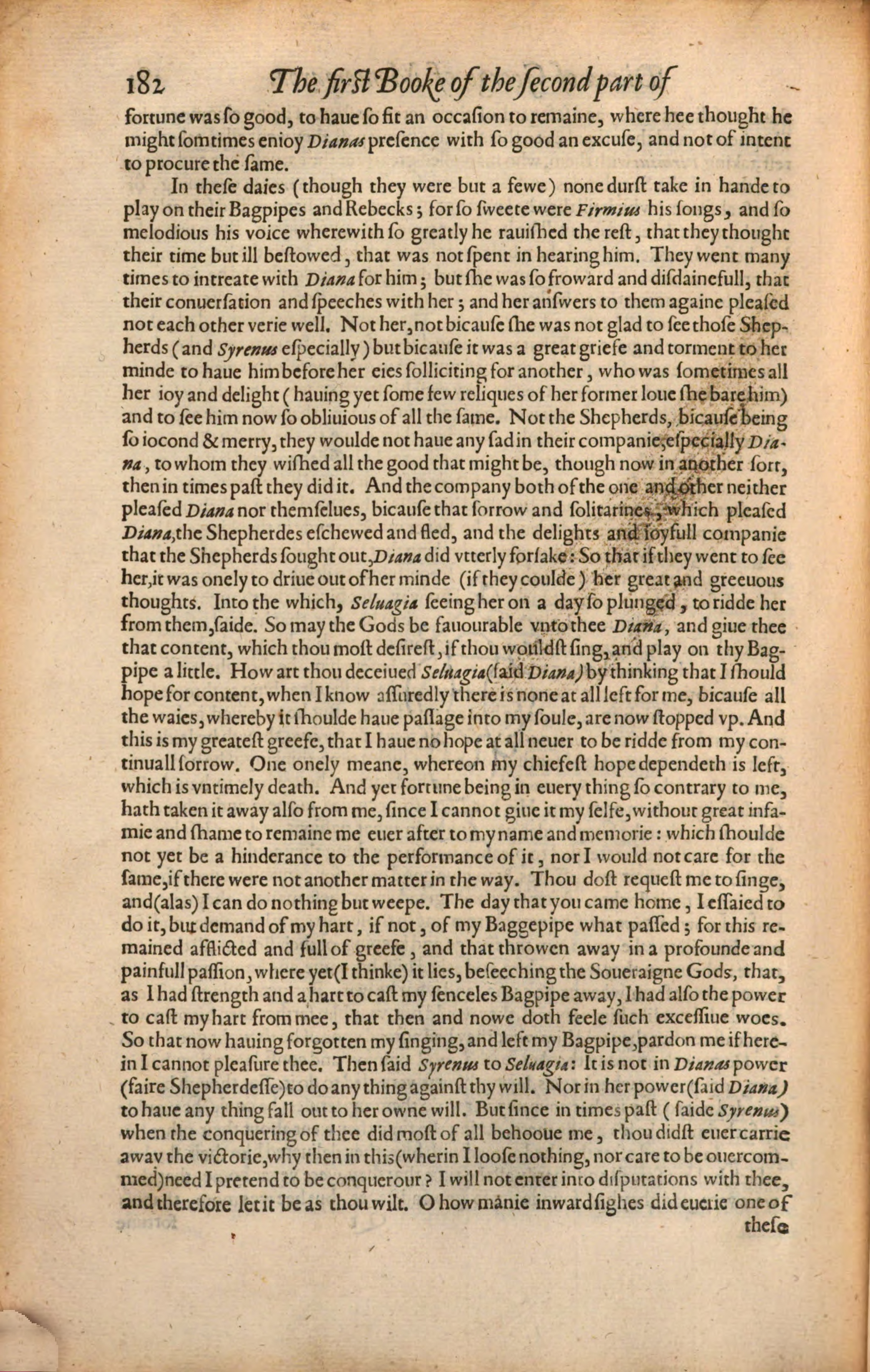 fortune was so good, to haue so fit an occasion to remaine, where hee thought he might somtimes enioy Dianas presence with so good an excuse, and not of intent to procure the same.
In these daies (though they were but a fewe) none durst take in hande to play on their Bagpipes and Rebecks; for so sweete were Firmius his songs, and so melodious his voice wherewith so greatly he rauished the rest, that they thought their time but ill bestowed, that was not spent in hearing him. They went many times to intreate with Diana for him; but she was so froward and disdainefull, that their conuersation and speeches with her; and her answers to them againe pleased not each other verie well. Not her, not bicause she was not glad to see those Shepâˆ£herds (and Syrenus especially) but bicause it was a great griefe and torment to her minde to haue him before her eies solliciting for another, who was sometimes all her ioy and delight (hauing yet some few reliques of her former loue she bare him) and to see him now so obliuious of all the same. Not the Shepherds, bicause being so iocond & merry, they woulde not haue any sad in their companie, especially Diaâˆ£na, to whom they wished all the good that might be, though now in another sort, then in times past they did it. And the company both of the one and other neither pleased Diana nor themselues, bicause that sorrow and solitarines, which pleased Diana, the Shepherdes eschewed and fled, and the delights and ioyfull companie that the Shepherds sought out, Diana did vtterly forsake: So that if they went to see her, it was onely to driue out of her minde (if they coulde) her great and greeuous thoughts. Into the which, Seluagia seeing her on a day so plunged, to ridde her from them, saide. So may the Gods be fauourable vnto thee Diana, and giue thee that content, which thou most desirest, if thou wouldst sing, and play on thy Bagâˆ£pipe a little. How art thou deceiued Seluagia (said Diana) by thinking that I should hope for content, when I know assuredly there is none at all left for me, bicause all the waies, whereby it shoulde haue passage into my soule, are now stopped vp. And this is my greatest greefe, that I haue no hope at all neuer to be ridde from my conâˆ£tinuall sorrow. One onely meane, whereon my chiefest hope dependeth is left, which is vntimely death. And yet fortune being in euery thing so contrary to me, hath taken it away also from me, since I cannot giue it my selfe, without great infaâˆ£mie and shame to remaine me euer after to my name and memorie: which shoulde not yet be a hinderance to the performance of it, nor I would not care for the same, if there were not another matter in the way. Thou dost request me to singe, and (alas) I can do nothing but weepe. The day that you came home, I essaied to do it, but demand of my hart, if not, of my Baggepipe what passed; for this reâˆ£mained afflicted and full of greefe, and that throwen away in a profounde and painfull passion, where yet (I thinke) it lies, beseeching the Soueraigne Gods, that, as I had strength and a hart to cast my senceles Bagpipe away, I had also the power to cast my hart from mee, that then and nowe doth feele such excessiue woes. So that now hauing forgotten my singing, and left my Bagpipe, pardon me if hereâˆ£in I cannot pleasure thee. Then said Syrenus to Seluagia: It is not in Dianas power (faire Shepherdesse) to do any thing against thy will. Nor in her power (said Diana) to haue any thing fall out to her owne will. But since in times past (saide Syrenus) when the conquering of thee did most of all behooue me, thou didst euer carrie away the victorie, why then in this (wherin I loose nothing, nor care to be ouercomâˆ£med) need I pretend to be conquer our? I will not enter into disputations with thee, and therefore let it be as thou wilt. O how manie inward sighes did euerie one of