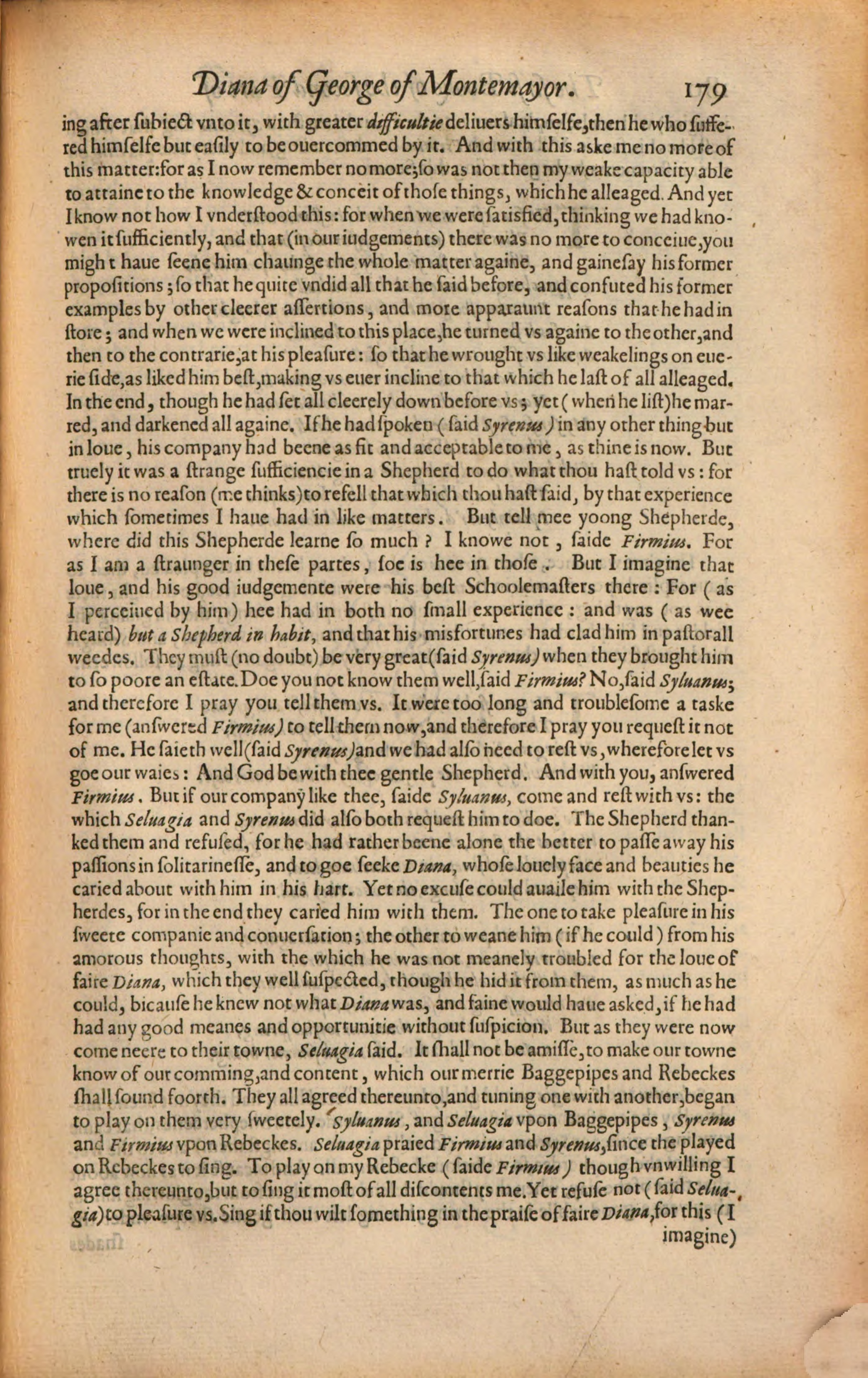 after subiect vnto it, with greater difficultie deliuers himselfe, then he who suffeâˆ£red himselfe but easily to be ouercommed by it. And with this aske me no more of this matter: for as I now remember no more; so was not then my weake capacity able to attaine to the knowledge & conceit of those things, which he alleaged. And yet I know not how I vnderstood this: for when we were satisfied, thinking we had knoâˆ£wen it sufficiently, and that (in our iudgements) there was no more to conceiue, you might haue seene him chaunge the whole matter againe, and gainesay his former propositions; so that he quite vndid all that he said before, and confuted his former examples by other cleerer assertions, and more apparaunt reasons that he had in store; and when we were inclined to this place, he turned vs againe to the other, and then to the contrarie, at his pleasure: so that he wrought vs like weakelings on eueâˆ£rie side, as liked him best, making vs euer incline to that which he last of all alleaged. In the end, though he had set all cleerely down before vs; yet (when he list) he marâˆ£red, and darkened all againe. If he had spoken (said Syrenus) in any other thing but in loue, his company had beene as fit and acceptable to me, as thine is now. But truely it was a strange sufficiencie in a Shepherd to do what thou hast told vs: for there is no reason (me thinks) to refell that which thou hast said, by that experience which sometimes I haue had in like matters. But tell mee yoong Shepherde, where did this Shepherde learne so much? I knowe not, saide Firmius. For as I am a straunger in these partes, soe is hee in those. But I imagine that loue, and his good iudgemente were his best Schoolemasters there: For (as I perceiued by him) hee had in both no small experience: and was (as wee heard) but a Shepherd in habit, and that his misfortunes had clad him in pastorall weedes. They must (no doubt) be very great (said Syrenus) when they brought him to so poore an estate. Doe you not know them well, said Firmius? No, said Syluanus; and therefore I pray you tell them vs. It were too long and troublesome a taske for me (answered Firmius) to tell them now, and therefore I pray you request it not of me. He saieth well (said Syrenus) and we had also need to rest vs, wherefore let vs goe our waies: And God be with thee gentle Shepherd. And with you, answered Firmius. But if our company like thee, saide Syluanus, come and rest with vs: the which Seluagia and Syrenus did also both request him to doe. The Shepherd thanâˆ£ked them and refused, for he had rather beene alone the better to passe away his passions in solitarinesse, and to goe seeke Diana, whose louely face and beauties he caried about with him in his hart. Yet no excuse could auaile him with the Shepâˆ£herdes, for in the end they caried him with them. The one to take pleasure in his sweete companie and conuersation; the other to weane him (if he could) from his amorous thoughts, with the which he was not meanely troubled for the loue of faire Diana, which they well suspected, though he hid it from them, as much as he could, bicause he knew not what Diana was, and faine would haue asked, if he had had any good meanes and opportunitie without suspicion. But as they were now come neere to their towne, Seluagia said. It shall not be amisse, to make our towne know of our comming, and content, which our merrie Baggepipes and Rebeckes shall sound foorth. They all agreed thereunto, and tuning one with another, began to play on them very sweetely. Syluanus, and Seluagia vpon Baggepipes, Syrenus and Firmius vpon Rebeckes. Seluagia praied Firmius and Syrenus, since the played on Rebeckes to sing. To play on my Rebecke (saide Firmius) though vnwilling I agree thereunto, but to sing it most of all discontents me. Yet refuse not (said Seluaâˆ£gia) to pleasure vs. Sing if thou wilt something in the praise of faire Diana, for this (I