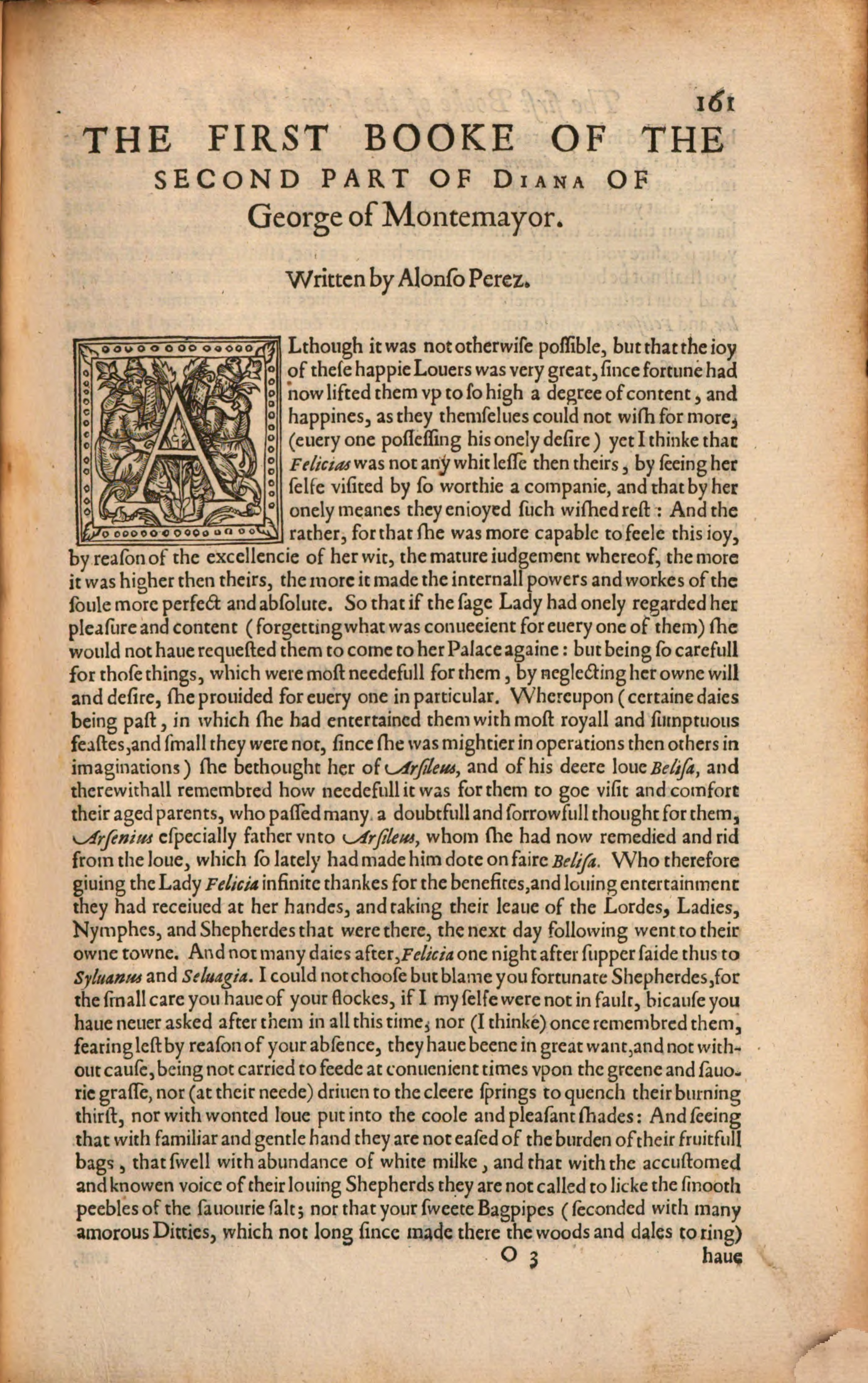 THE FIRST BOOKE OF THE SECOND PART OF DIANA OF George of Montemayor.

ALthough it was not otherwise possible, but that the ioy of these happie Louers was very great, since fortune had now lifted them vp to so high a degree of content, and happines, as they themselues could not wish for more, (euery one possessing his onely desire) yet I thinke that Felicias was not any whit lesse then theirs, by seeing her selfe visited by so worthie a companie, and that by her onely meanes they enioyed such wished rest: And the rather, for that she was more capable to feele this ioy, by reason of the excellencie of her wit, the mature iudgement whereof, the more it was higher then theirs, the more it made the internall powers and workes of the soule more perfect and absolute. So that if the sage Lady had onely regarded her pleasure and content (forgetting what was conueeient for euery one of them) she would not haue requested them to come to her Palace againe: but being so carefull for those things, which were most needefull for them, by neglecting her owne will and desire, she prouided for euery one in particular. Whereupon (certaine daies being past, in which she had entertained them with most royall and sumptuous feastes, and small they were not, since she was mightier in operations then others in imaginations) she bethought her of Arsileus, and of his deere loue Belisa, and therewithall remembred how needefull it was for them to goe visit and comfort their aged parents, who passed many a doubtfull and sorrowfull thought for them, Arsenius especially father vnto Arsileus, whom she had now remedied and rid from the loue, which so lately had made him dote on faire Belisa. Who therefore giuing the Lady Felicia infinite thankes for the benefites, and louing entertainment they had receiued at her handes, and taking their leaue of the Lordes, Ladies, Nymphes, and Shepherdes that were there, the next day following went to their owne towne. And not many daies after,Felicia one night after supper saide thus to Syluanus and Seluagia. I could not choose but blame you fortunate Shepherdes, for the small care you haue of your flockes, if I my selfe were not in fault, bicause you haue neuer asked after them in all this time, nor (I thinke) once remembred them, fearing lest by reason of your absence, they haue beene in great want, and not withâˆ£out cause, being not carried to feede at conuenient times vpon the greene and sauoâˆ£rie grasse, nor (at their neede) driuen to the cleere springs to quench their burning thirst, nor with wonted loue put into the coole and pleasant shades: And seeing that with familiar and gentle hand they are not eased of the burden of their fruitfull bags, that swell with abundance of white milke, and that with the accustomed and knowen voice of their louing Shepherds they are not called to licke the smooth peebles of the sauourie salt; nor that your sweete Bagpipes (seconded with many amorous Ditties, which not long since made there the woods and dales to ring)