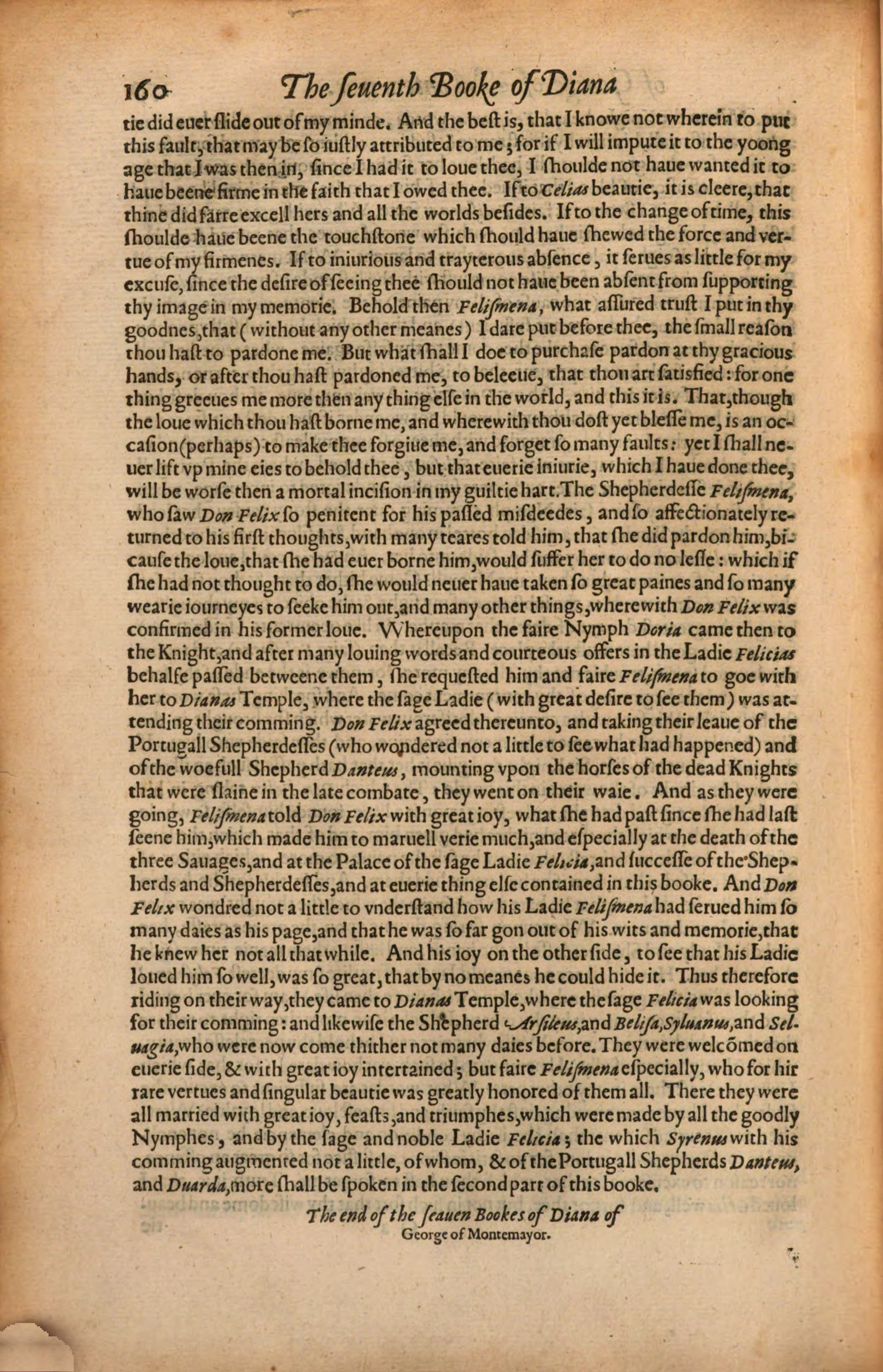 did euer slide out of my minde. And the best is, that I knowe not wherein to put this fault, that may be so iustly attributed to me; for if I will impute it to the yoong age that I was then in, since I had it to loue thee, I shoulde not haue wanted it to haue beene firme in the faith that I owed thee. If to Celias beautie, it is cleere, that thine did farre excell hers and all the worlds besides. If to the change of time, this shoulde haue beene the touchstone which should haue shewed the force and verâˆ£tue of my firmenes. If to iniurious and trayterous absence, it serues as little for my excuse, since the desire of seeing thee should not haue been absent from supporting thy image in my memorie. Behold then Felismena, what assured trust I put in thy goodnes, that (without any other meanes) I dare put before thee, the small reason thou hast to pardone me. But what shall I doe to purchase pardon at thy gracious hands, or after thou hast pardoned me, to beleeue, that thou art satisfied: for one thing greeues me more then any thing else in the world, and this it is. That, though the loue which thou hast borne me, and wherewith thou dost yet blesse me, is an ocâˆ£casion (perhaps) to make thee forgiue me, and forget so many faults: yet I shall neâˆ£uer lift vp mine eies to behold thee, but that euerie iniurie, which I haue done thee, will be worse then a mortal incision in my guiltie hart. The Shepherdesse Felismena, who saw Don Felix so penitent for his passed misdeedes, and so affectionately reâˆ£turned to his first thoughts, with many teares told him, that she did pardon him, biâˆ£cause the loue, that she had euer borne him, would suffer her to do no lesse: which if she had not thought to do, she would neuer haue taken so great paines and so many wearie iourneyes to seeke him out, and many other things, wherewith Don Felix was confirmed in his former loue. Whereupon the faire Nymph Doria came then to the Knight, and after many louing words and courteous offers in the Ladie Felicias behalfe passed betweene them, she requested him and faire Felismena to goe with her to Dianas Temple, where the sage Ladie (with great desire to see them) was atâˆ£tending their comming. Don Felix agreed thereunto, and taking their leaue of the Portugall Shepherdesses (who wondered not a little to see what had happened) and of the woefull Shepherd Danteus, mounting vpon the horses of the dead Knights that were slaine in the late combate, they went on their waie. And as they were going, Felismena told Don Felix with great ioy, what she had past since she had last seene him, which made him to maruell verie much, and especially at the death of the three Sauages, and at the Palace of the sage Ladie Felicia, and successe of the Shepâˆ£herds and Shepherdesses, and at euerie thing else contained in this booke. And Don Felix wondred not a little to vnderstand how his Ladie Felismena had serued him so many daies as his page, and that he was so far gon out of his wits and memorie, that he knew her not all that while. And his ioy on the other side, to see that his Ladie loued him so well, was so great, that by no meanes he could hide it. Thus therefore riding on their way, they came to Dianas Temple, where the sage Felicia was looking for their comming: and likewise the Shepherd Arsileus, and Belisa, Syluanus, and Selâˆ£uagia, who were now come thither not many daies before. They were welcoÌ„med on euerie side, & with great ioy intertained; but faire Felismena especially, who for hir rare vertues and singular beautie was greatly honored of them all. There they were all married with great ioy, feasts, and triumphes, which were made by all the goodly Nymphes, and by the sage and noble Ladie Felicia; the which Syrenus with his comming augmented not a little, of whom, & of the Portugall Shepherds Danteus, and Duarda, more shall be spoken in the second part of this booke.

The end of the seauen Bookes of Diana of
George of Montemayor.