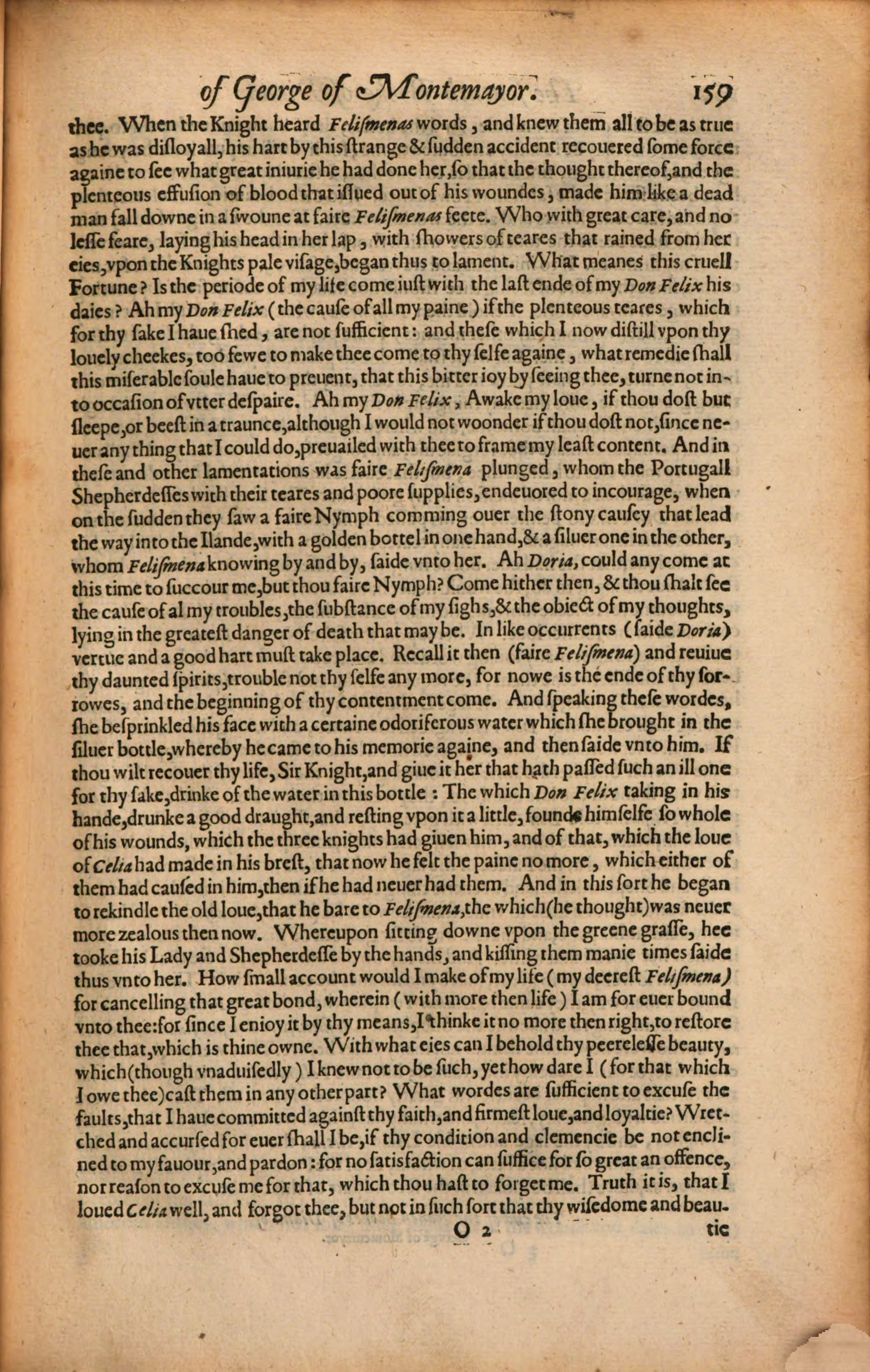 thee. When the Knight heard Felismenas words, and knew them all to be as true as he was disloyall, his hart by this strange & sudden accident recouered some force againe to see what great iniurie he had done her, so that the thought thereof, and the plenteous effusion of blood that issued out of his woundes, made him like a dead man fall downe in a swoune at faire Felismenas feete. Who with great care, and no lesse feare, laying his head in her lap, with showers of teares that rained from her eies, vpon the Knights pale visage, began thus to lament. What meanes this cruell Fortune? Is the periode of my life come iust with the last ende of my Don Felix his daies? Ah my Don Felix (the cause of all my paine) if the plenteous teares, which for thy sake I haue shed, are not sufficient: and these which I now distill vpon thy louely cheekes, too fewe to make thee come to thy selfe againe, what remedie shall this miserable soule haue to preuent, that this bitter ioy by seeing thee, turne not inâˆ£to occasion of vtter despaire. Ah my Don Felix, Awake my loue, if thou dost but sleepe, or beest in a traunce, although I would not woonder if thou dost not, since neâˆ£uer any thing that I could do, preuailed with thee to frame my least content. And in these and other lamentations was faire Felismena plunged, whom the Portugall Shepherdesses with their teares and poore supplies, endeuored to incourage, when on the sudden they saw a faire Nymph comming ouer the stony causey that lead the way into the Ilande, with a golden bottel in one hand, & a siluer one in the other, whom Felismena knowing by and by, saide vnto her. Ah Doria, could any come at this time to succour me, but thou faire Nymph? Come hither then, & thou shalt see the cause of al my troubles, the substance of my sighs, & the obiect of my thoughts, lying in the greatest danger of death that may be. In like occurrents (saide Doria) vertue and a good hart must take place. Recall it then (faire Felismena) and reuiue thy daunted spirits, trouble not thy selfe any more, for nowe is the ende of thy sorâˆ£rowes, and the beginning of thy contentment come. And speaking these wordes, she besprinkled his face with a certaine odoriferous water which she brought in the siluer bottle, whereby he came to his memorie againe, and then saide vnto him. If thou wilt recouer thy life, Sir Knight, and giue it her that hath passed such an ill one for thy sake, drinke of the water in this bottle: The which Don Felix taking in his hande, drunke a good draught, and resting vpon it a little, founde himselfe so whole of his wounds, which the three knights had giuen him, and of that, which the loue of Celia had made in his brest, that now he felt the paine no more, which either of them had caused in him, then if he had neuer had them. And in this sort he began to rekindle the old loue, that he bare to
Felismena, the which (he thought) was neuer more zealous then now. Whereupon sitting downe vpon the greene grasse, hee tooke his Lady and Shepherdesse by the hands, and kissing them manie times saide thus vnto her. How small account would I make of my life (my deerest Felismena) for cancelling that great bond, wherein (with more then life) I am for euer bound vnto thee: for since I enioy it by thy means, I thinke it no more then right, to restore thee that, which is thine owne. With what eies can I behold thy peerelesse beauty, which (though vnaduisedly) I knew not to be such, yet how dare I (for that which I owe thee) cast them in any other part? What wordes are sufficient to excuse the faults, that I haue committed against thy faith, and firmest loue, and loyaltie? Wretâˆ£ched and accursed for euer shall I be, if thy condition and clemencie be not encliâˆ£ned to my fauour, and pardon: for no satisfaction can suffice for so great an offence, nor reason to excuse me for that, which thou hast to forget me. Truth it is, that I loued Celiawell, and forgot thee, but not in such sort that thy wisedome and beauâˆ£tie