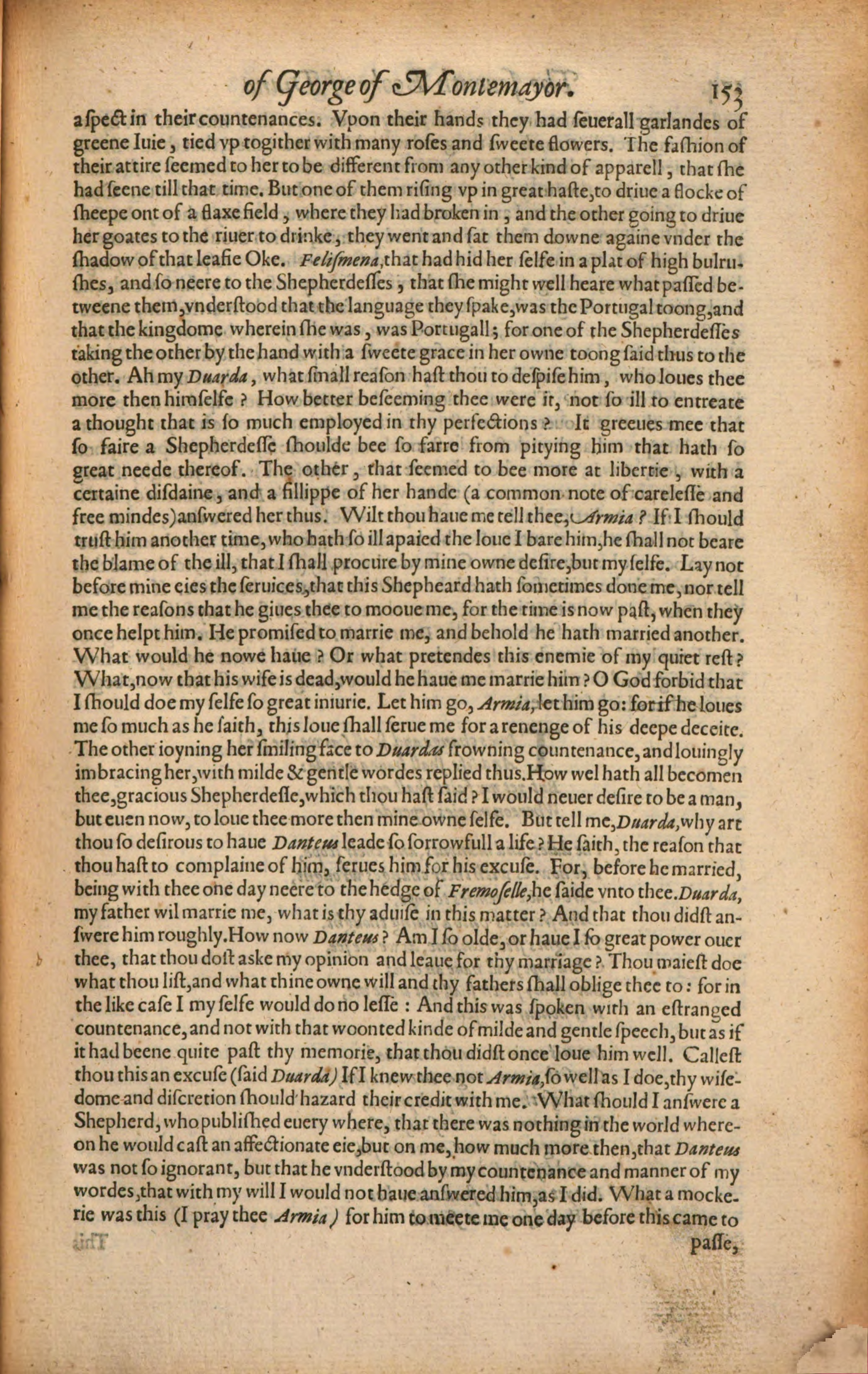 aspect in their countenances. Vpon their hands they had seuerall garlandes of greene Iuie, tied vp togither with many roses and sweete flowers. The fashion of their attire seemed to her to be different from any other kind of apparell, that she had seene till that time. But one of them rising vp in great haste, to driue a flocke of sheepe out of a flaxe field, where they had broken in, and the other going to driue her goates to the riuer to drinke, they went and sat them downe againe vnder the shadow of that leafie Oke. Felismena, that had hid her selfe in a plat of high bulruâˆ£shes, and so neere to the Shepherdesses, that she might well heare what passed beâˆ£tweene them, vnderstood that the language they spake, was the Portugal toong, and that the kingdome wherein she was, was Portugall; for one of the Shepherdesses taking the other by the hand with a sweete grace in her owne toong said thus to the other. Ah my Duarda,what small reason hast thou to despise him, who loues thee more then himselfe? How better beseeming thee were it, not so ill to entreate a thought that is so much employed in thy perfections? It greeues mee that so faire a Shepherdesse shoulde bee so farre from pitying him that hath so great neede thereof. The other, that seemed to bee more at libertie, with a certaine disdaine, and a fillippe of her hande (a common note of carelesse and free mindes) answered her thus. Wilt thou haue me tell thee, Armia? If I should trust him another time, who hath so ill apaied the loue I bare him, he shall not beare the blame of the ill, that I shall procure by mine owne desire, but my selfe. Lay not before mine eies the seruices, that this Shepheard hath sometimes done me, nor tell me the reasons that he giues thee to mooue me, for the time is now past, when they once helpt him. He promised to marrie me, and behold he hath married another. What would he nowe haue? Or what pretendes this enemie of my quiet rest? What, now that his wife is dead, would he haue me marrie him? O God forbid that I should doe my selfe so great iniurie. Let him go, Armia, let him go: for if he loues me so much as he saith, this loue shall serue me for a renenge of his deepe deceite. The other ioyning her smiling face to Duardas srowning countenance, and louingly imbracing her, with milde & gentle wordes replied thus. How wel hath all becomen thee, gracious Shepherdesse, which thou hast said? I would neuer desire to be a man, but euen now, to loue thee more then mine owne selfe. But tell me, Duarda, why art thou so desirous to haue Danteus leade so sorrowfull a life? He saith, the reason that thou hast to complaine of him, serues him for his excuse. For, before he married, being with thee one day neere to the hedge of Fremoselle, he saide vnto thee. Duarda, my father wil marrie me, what is thy aduise in this matter? And that thou didst anâˆ£swere him roughly. How now Danteus? Am I so olde, or haue I so great power ouer thee, that thou dost aske my opinion and leaue for thy marriage? Thou maiest doe what thou list, and what thine owne will and thy fathers shall oblige thee to: for in the like case I my selfe would do no lesse: And this was spoken with an estranged countenance, and not with that woonted kinde of milde and gentle speech, but as if it had beene quite past thy memorie, that thou didst once loue him well. Callest thou this an excuse (said Duarda) If I knew thee not Armia, so well as I doe, thy wiseâˆ£dome and discretion should hazard their credit with me. What should I answere a Shepherd, who published euery where, that there was nothing in the world wherâˆ£on he would cast an affectionate eie, but on me, how much more then, that Danteus was not so ignorant, but that he vnderstood by my countenance and manner of my wordes, that with my will I would not haue answered him, as I did. What a mockeâˆ£rie was this (I pray thee Armia) for him to meete me one day before this came to