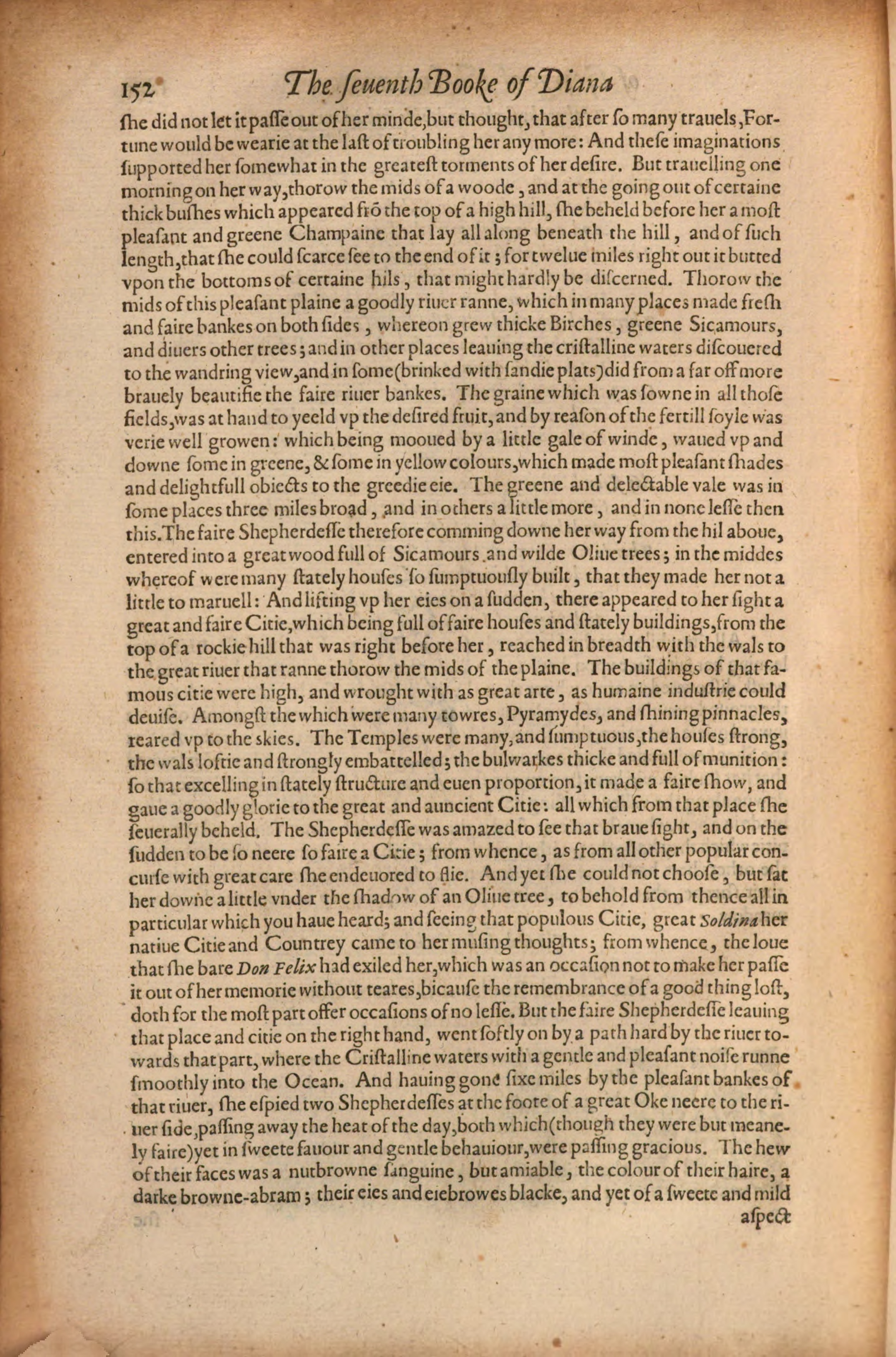 she did not let it passe out of her minde, but thought, that after so many trauels, Forâˆ£tune would be wearie at the last of troubling her any more: And these imaginations supported her somewhat in the greatest torments of her desire. But trauelling one morning on her way, thorow the mids of a woode, and at the going out of certaine thick bushes which appeared froÌ„ the top of a high hill, she beheld before her a most pleasant and greene Champaine that lay all along beneath the hill, and of such length, that she could scarce see to the end of it; for twelue miles right out it butted vpon the bottoms of certaine hils, that might hardly be discerned. Thorow the mids of this pleasant plaine a goodly riuer ranne, which in many places made fresh and faire bankes on both sides, whereon grew thicke Birches, greene Sicamours, and diuers other trees; and in other places leauing the cristalline waters discouered to the wandring view, and in some (brinked with sandie plats) did from a far off more brauely beautifie the faire riuer bankes. The graine which was sowne in all those fields, was at hand to yeeld vp the desired fruit, and by reason of the fertill soyle was verie well growen: which being mooued by a little gale of winde, waued vp and downe some in greene, & some in yellow colours, which made most pleasant shades and delightful obiects to the greedie eie. The greene and delectable vale was in some places three miles broad, and in others a little more, and in none lesse then this. The faire Shepherdesse therefore comming downe her way from the hil aboue, entered into a great wood full of Sicamours and wilde Oliue trees; in the middes whereof were many stately houses so sumptuously built, that they made her not a little to maruell: And lifting vp her eies on a sudden, there appeared to her sight a great and faire Citie, which being full of faire houses and stately buildings, from the top of a rockie hill that was right before her, reached in breadth with the wals to the great riuer that ranne thorow the mids of the plaine. The buildings of that faâˆ£mous citie were high, and wrought with as great arte, as humaine industrie could deuise. Amongst the which were many towres, Pyramydes, and shining pinnacles, reared vp to the skies. The Temples were many, and sumptuous, the houses strong, the wals loftie and strongly embattelled; the bulwarkes thicke and full of munition: so that excelling in stately structure and euen proportion, it made a faire show, and gaue a goodly glorie to the great and auncient Citie: all which from that place she seuerally beheld. The Shepherdesse was amazed to see that braue sight, and on the sudden to be so neere so faire a Citie; from whence, as from all other popular conâˆ£curse with great care she endeuored to flie. And yet she could not choose, but sat her downe a little vnder the shadow of an Oliue tree, to behold from thence all in particular which you haue heard; and seeing that populous Citie, great Soldina her natiue Citie and Countrey came to her musing thoughts; from whence, the loue that she bare Don Felix had exiled her, which was an occasion not to make her passe it out of her memorie without teares, bicause the remembrance of a good thing lost, doth for the most part offer occasions of no lesse. But the faire Shepherdesse leauing that place and citie on the right hand, went softly on by a path hard by the riuer toâˆ£wards that part, where the Cristalline waters with a gentle and pleasant noise runne smoothly into the Ocean. And hauing gone sixe miles by the pleasant bankes of that riuer, she espied two Shepherdesses at the foote of a great Oke neere to the riâˆ£uer side, passing away the heat of the day, both which (though they were but meaneâˆ£ly faire) yet in sweete fauour and gentle behauiour, were passing gracious. The hew of their faces was a nutbrowne sanguine, but amiable, the colour of their haire, a darke browne-abram; their eies and eiebrowes blacke, and yet of a sweete and mild