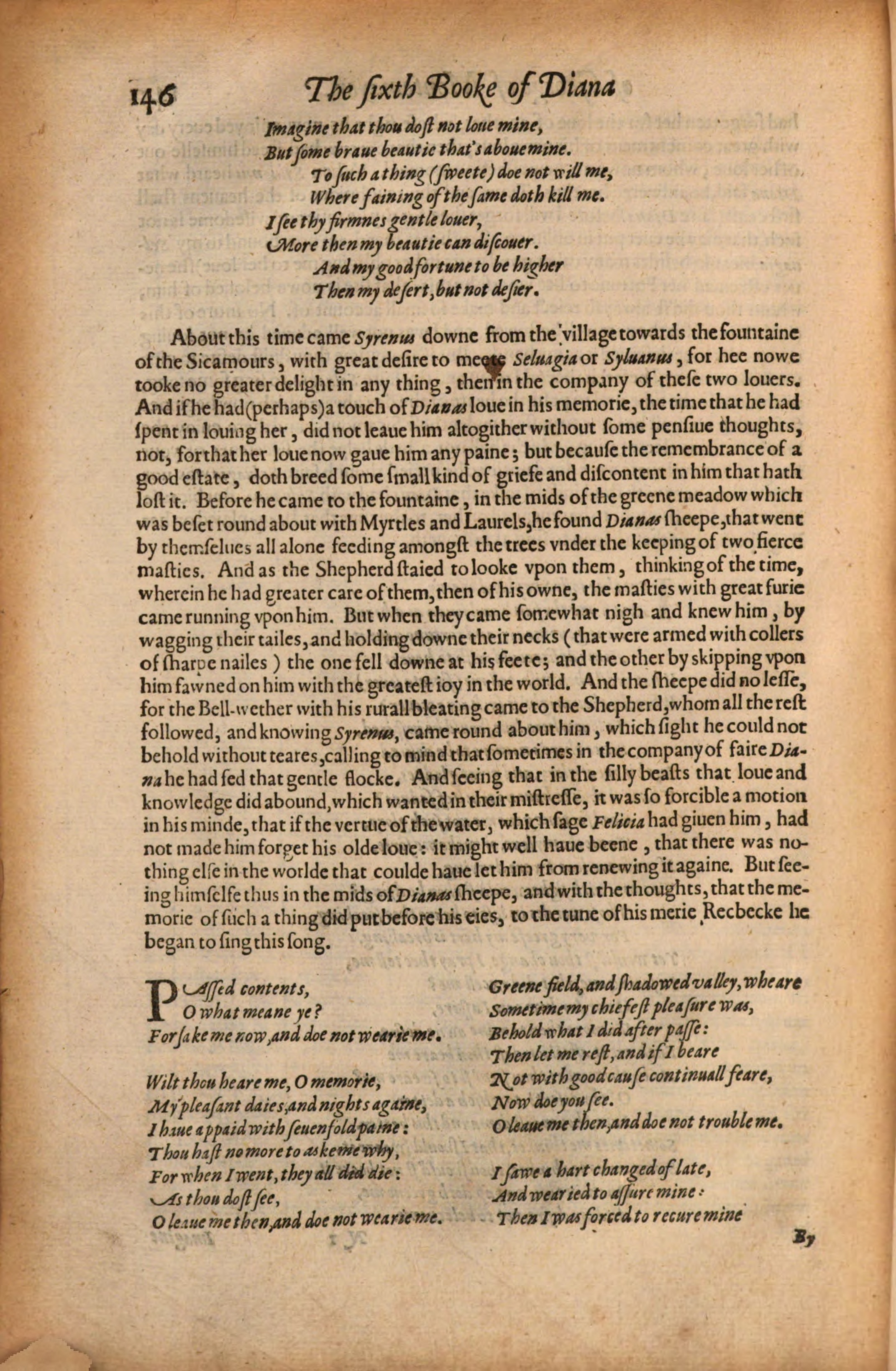 Imagine that thou dost not loue mine,
But some braue beautie thatâ€™s aboue mine.
To such a thing (sweete) doe not will me,
Where faining of the same doth kill me.
I see thy firmnes gentle louer,
More then my beautie can discouer.
And my good fortune to be higher
Then my desert, but not desier.

About this time came Syrenus downe from the village towards the fountaine of the Sicamours, with great desire to meete Seluagia or Syluanus, for hee nowe tooke no greater delight in any thing, then in the company of these two louers. And if he had (perhaps) a touch of Dianas loue in his memorie, the time that he had spent in louing her, did not leaue him altogither without some pensiue thoughts, not, for that her loue now gaue him any paine; but because the remembrance of a good estate, doth breed some small kind of griefe and discontent in him that hath lost it. Before he came to the fountaine, in the mids of the greene meadow which was beset round about with Myrtles and Laurels, he found Dianas sheepe, that went by themselues all alone feeding amongst the trees vnder the keeping of two fierce masties. And as the Shepherd staied to looke vpon them, thinking of the time, wherein he had greater care of them, then of his owne, the masties with great furie came running vpon him. But when they came somewhat nigh and knew him, by wagging their tailes, and holding downe their necks (that were armed with collers of sharpe nailes) the one fell downe at his feete; and the other by skipping vpon him fawned on him with the greatest ioy in the world. And the sheepe did no lesse, for the Bell-wether with his rurall bleating came to the Shepherd, whom all the rest followed, and knowing Syrenus, came round about him, which sight he could not behold without teares, calling to mind that sometimes in the company of faire Diaâˆ£na he had fed that gentle flocke. And seeing that in the silly beasts that loue and knowledge did abound, which wanted in their mistresse, it was so forcible a motion in his minde, that if the vertue of the water, which sage Felicia had giuen him, had not made him forget his olde loue: it might well haue beene, that there was noâˆ£thing else in the worlde that coulde haue let him from renewing it againe. But seeâˆ£ing himselfe thus in the mids of Dianas sheepe, and with the thoughts, that the meâˆ£morie of such a thing did put before his eies, to the tune of his merie Recbecke he began to sing this song.

PAssed contents,
O what meane ye?
Forsake me now, and doe not wearie me.

Wilt thou heare me, O memorie,
My pleasant daies, and nights againe,
I haue appaid with seuenfold paine:
Thou hast no more to aske me why,
For when I went, they all did die:
As thou dost see,
O leaue me then, and doe not wearie me.

Greene field, and shadowed valley, wheare
Sometime my chiefest pleasure was,
Behold what I did after passe:
Then let me rest, and if I beare
Not with good cause continuall feare,
Now doe you see.
O leaue me then, and doe not trouble me.

I sawe a hart changed of late,
And wearied to assure mine:
Then I was forced to recure mine