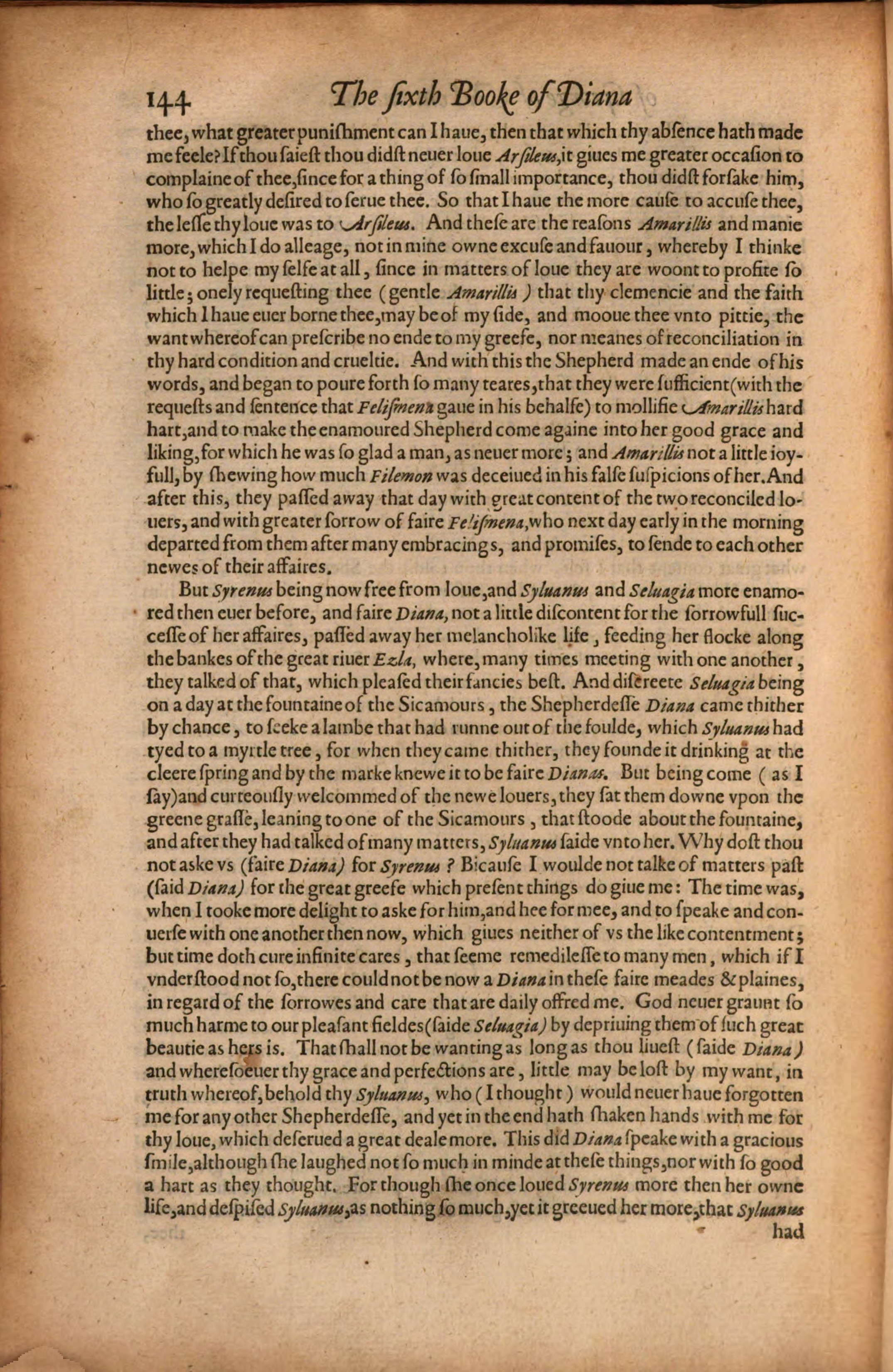 thee, what greater punishment can I haue, then that which thy absence hath made me feele? If thou saiest thou didst neuer loue Arsileus, it giues me greater occasion to complaine of thee, since for a thing of so small importance, thou didst forsake him, who so greatly desired to serue thee. So that I haue the more cause to accuse thee, the lesse thy loue was to Arsileus. And these are the reasons Amarillis and manie more, which I do alleage, not in mine owne excuse and fauour, whereby I thinke not to helpe my selfe at all, since in matters of loue they are woont to profite so little; onely requesting thee (gentle Amarillis) that thy clemencie and the faith which I haue euer borne thee, may be of my side, and mooue thee vnto pittie, the want whereof can prescribe no ende to my greefe, nor meanes of reconciliation in thy hard condition and crueltie. And with this the Shepherd made an ende of his words, and began to poure forth so many teares, that they were sufficient (with the requests and sentence that Felismena gaue in his behalfe) to mollifie Amarillis hard hart, and to make the enamoured Shepherd come againe into her good grace and liking, for which he was so glad a man, as neuer more; and Amarillisnot a little ioyâˆ£full, by shewing how much Filemon was deceiued in his false suspicions of her. And after this, they passed away that day with great content of the two reconciled loâˆ£uers, and with greater sorrow of faire Felismena, who next day early in the morning departed from them after many embracings, and promises, to sende to each other newes of their affaires.
But Syrenus being now free from loue, and Syluanus and Seluagia more enamoâˆ£red then euer before, and faire Diana, not a little discontent for the sorrowfull sucâˆ£cesse of her affaires, passed away her melancholike life, feeding her flocke along the bankes of the great riuer Ezla, where, many times meeting with one another, they talked of that, which pleased their fancies best. And discreete Seluagia being on a day at the fountaine of the Sicamours, the Shepherdesse Diana came thither by chance, to seeke a lambe that had runne out of the foulde, which Syluanus had tyed to a myrtle tree, for when they came thither, they founde it drinking at the cleere spring and by the marke knewe it to be faire Dianas. But being come (as I say) and curteously welcommed of the newe louers, they sat them downe vpon the greene grasse, leaning to one of the Sicamours, that stoode about the fountaine, and after they had talked of many matters, Syluanus saide vnto her. Why dost thou not aske vs (faire
Diana) for Syrenus? Bicause I woulde not talke of matters past (said Diana) for the great greefe which present things do giue me: The time was, when I tooke more delight to aske for him, and hee for mee, and to speake and conâˆ£uerse with one another then now, which giues neither of vs the like contentment; but time doth cure infinite cares, that seeme remedilesse to many men, which if I vnderstood not so, there could not be now a Diana in these faire meades & plaines, in regard of the sorrowes and care that are daily offred me. God neuer graunt so much harme to our pleasant fieldes (saide Seluagia) by depriuing them of such great beautie as hers is. That shall not be wanting as long as thou liuest (saide Diana) and wheresoeuer thy grace and perfections are, little may be lost by my want, in truth whereof, behold thy Syluanus, who (I thought) would neuer haue forgotten me for any other Shepherdesse, and yet in the end hath shaken hands with me for thy loue, which deserued a great deale more. This did Diana speake with a gracious smile, although she laughed not so much in minde at these things, nor with so good a hart as they thought. For though she once loued Syrenus more then her owne life, and despised Syluanus, as nothing so much, yet it greeued her more, that
Syluanus