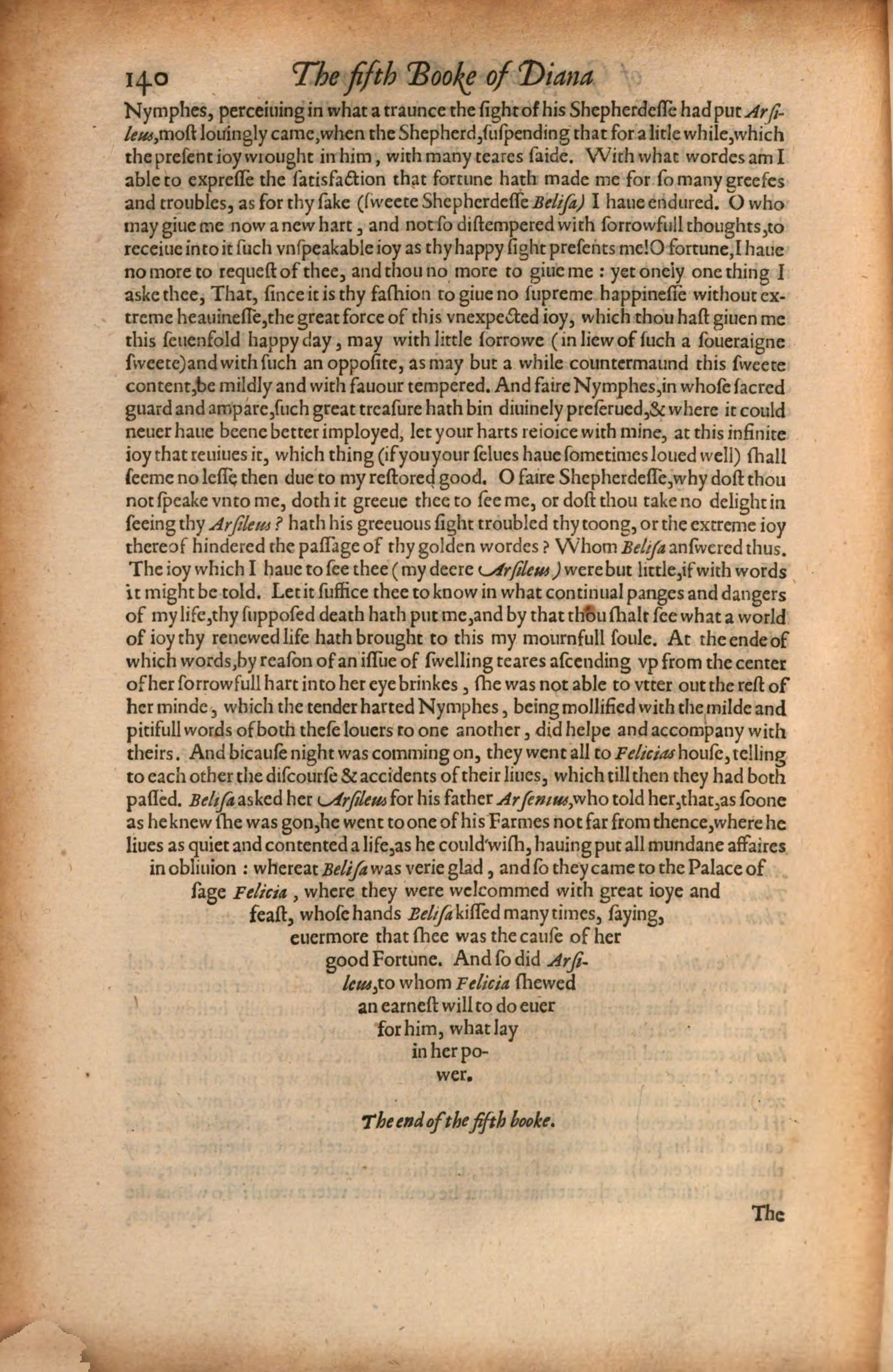 Nymphes, perceiuing in what a traunce the sight of his Shepherdesse had put Arsiâˆ£leus, most louingly came, when the Shepherd, suspending that for a litle while, which the present ioy wrought in him, with many teares saide. With what wordes am I able to expresse the satisfaction that fortune hath made me for so many greefes and troubles, as for thy sake (sweete Shepherdesse Belisa) I haue endured. O who may giue me now a new hart, and not so distempered with sorrowfull thoughts, to receiue into it such vnspeakable ioy as thy happy sight presents me! O fortune, I haue no more to request of thee, and thou no more to giue me: yet onely one thing I aske thee, That, since it is thy fashion to giue no supreme happinesse without exâˆ£treme heauinesse, the great force of this vnexpected ioy, which thou hast giuen me this seuenfold happy day, may with little sorrowe (in liew of such a soueraigne sweete) and with such an opposite, as may but a while countermaund this sweete content, be mildly and with fauour tempered. And faire Nymphes, in whose sacred guard and ampare, such great treasure hath bin diuinely preserued, & where it could neuer haue beene better imployed, let your harts reioice with mine, at this infinite ioy that reuiues it, which thing (if you your selues haue sometimes loued well) shall seeme no lesse then due to my restored good. O faire Shepherdesse, why dost thou not speake vnto me, doth it greeue thee to see me, or dost thou take no delight in seeing thy Arsileus? hath his greeuous sight troubled thy toong, or the extreme ioy thereof hindered the passage of thy golden wordes? Whom Belisa answered thus. The ioy which I haue to see thee (my deere Arsileus) were but little, if with words it might be told. Let it suffice thee to know in what continual panges and dangers of my life, thy supposed death hath put me, and by that thou shalt see what a world of ioy thy renewed life hath brought to this my mournfull soule. At the ende of which words, by reason of an issue of swelling teares ascending vp from the center of her sorrowfull hart into her eye brinkes, she was not able to vtter out the rest of her minde, which the tender harted Nymphes, being mollified with the milde and pitifull words of both these louers to one another, did helpe and accompany with theirs. And bicause night was comming on, they went all to Felicias house, telling to each other the discourse & accidents of their liues, which till then they had both passed. Belisa asked her Arsileus for his father Arsenius, who told her, that, as soone as
he knew she was gon, he went to one of his Farmes not far from thence, where he liues as quiet and contented a life, as he could wish, hauing put all mundane affaires in obliuion: whereat Belisa was verie glad, and so they came to the Palace of sage Felicia, where they were welcommed with great ioye and
feast, whose hands Belisa kissed many times, saying,
euermore that shee was the cause of her
good Fortune. And so did Arsi-
leus, to whom Felicia shewed
an earnest will to do euer
for him, what lay
in her po-
wer.