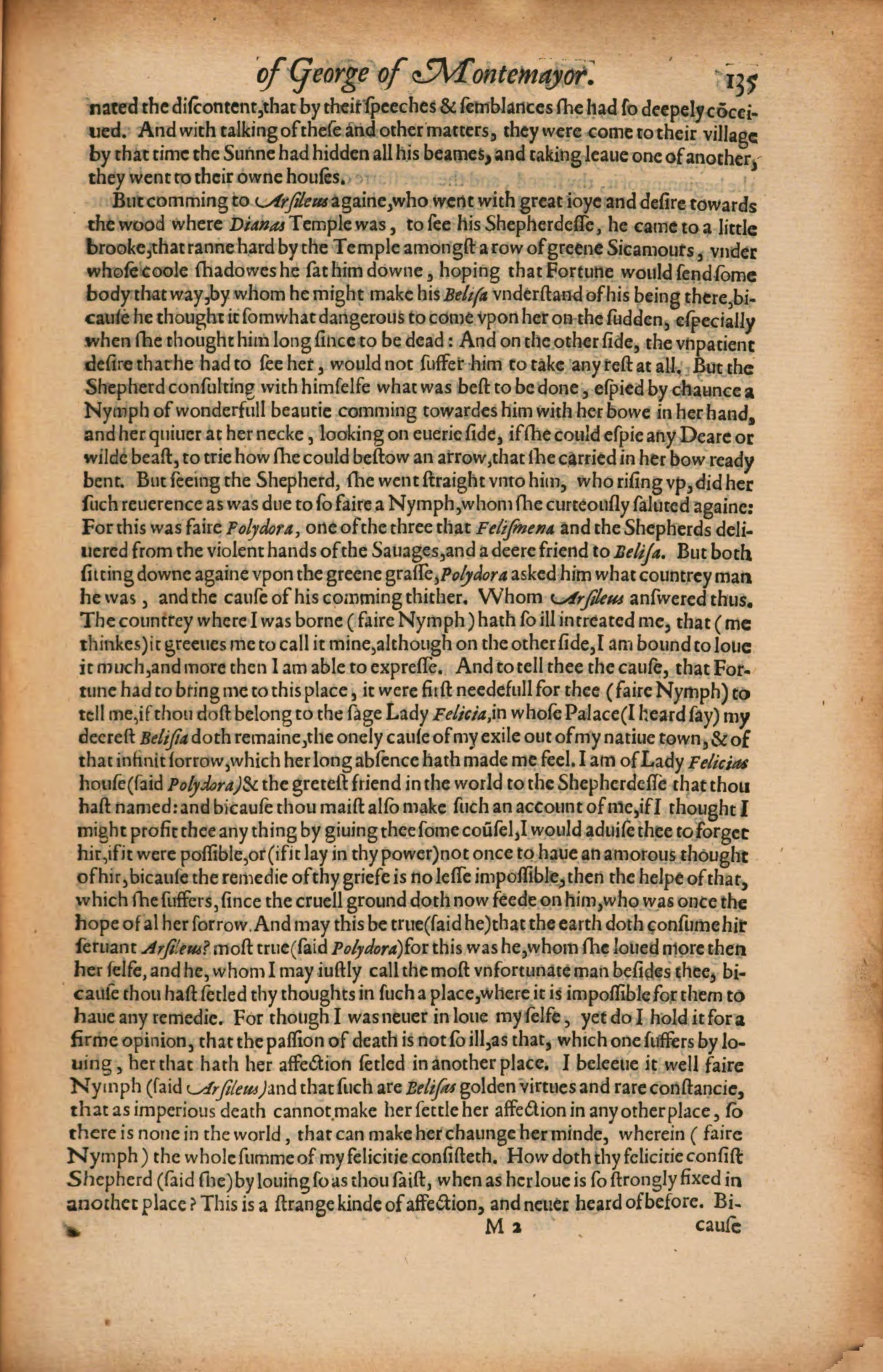 the discontent, that by their speeches & semblances she had so deepely coÌ„ceiâˆ£ued. And with talking of these and other matters, they were come to their village by that time the Sunne had hidden all his beames, and taking leaue one of another, they went to their owne houses.
But comming to Arsileus againe, who went with great ioye and desire towards the wood where Dianas Temple was, to see his Shepherdesse, he came to a little brooke, that ranne hard by the Temple amongst a row of greene Sicamours, vnder whose coole shadowes he sat him downe, hoping that Fortune would send some body that way, by whom he might make his Belisa vnderstand of his being there, biâˆ£cause he thought it somwhat dangerous to come vpon her on the sudden, especially when she thought him long since to be dead: And on the other side, the vnpatient desire that he had to see her, would not suffer him to take any rest at all. But the Shepherd consulting with himselfe what was best to be done, espied by chaunce a Nymph of wonderfull beautie comming towardes him with her bowe in her hand, and her quiuer at her necke, looking on euerie side, if she could espie any Deare or wilde beast, to trie how she could bestow an arrow, that she carried in her bow ready bent. But seeing the Shepherd, she went straight vnto him, who rising vp, did her such reuerence as was due to so faire a Nymph, whom she curteously saluted againe: For this was faire Polydora, one of the three that Felismena and the Shepherds deliâˆ£uered from the violent hands of the Sauages, and a deere friend to Belisa. But both sitting downe againe vpon the greene grasse, Polydora asked him what countrey man he was, and the cause of his comming thither. Whom Arsileus answered thus. The countrey where I was borne (faire Nymph) hath so ill intreated me, that (me thinkes) it greeues me to call it mine, although on the other side, I am bound to loue it much, and more then I am able to expresse. And to tell thee the cause, that Forâˆ£tune had to bring me to this place, it were first needefull for thee (faire Nymph) to tell me, if thou dost belong to the sage Lady Felicia, in whose Palace (I heard say) my deerest Belisia doth remaine, the onely cause of my exile out of my natiue town, & of that infinit sorrow, which her long absence hath made me feel, I am of Lady Felicias house (said
Polydora) & the gretest friend in the world to the Shepherdesse that thou hast named: and bicause thou maist also make such an account of me, if I thought I might profit thee any thing by giuing thee some consel, I would aduise thee to forget hir, if it were possible, or (if it lay in thy power) not once to haue an amorous thought of hir, bicause the remedie of thy griefe is no lesse impossible, then the helpe of that, which she suffers, since the cruell ground doth now feede on him, who was once the hope of al her sorrow. And may this be true (said he) that the earth doth consume hir seruant
Arsileus? most true (said Polydora) for this was he, whom she loued more then her selfe, and he, whom I may iustly call the most vnfortunate man besides thee, biâˆ£cause thou hast setled thy thoughts in such a place, where it is impossible for them to haue any remedie. For though I was neuer in loue my selfe, yet do I hold it for a firme opinion, that the passion of death is not so ill, as that, which one suffers by loâˆ£uing, her that hath her affection setled in another place. I beleeue it well faire Nymph (said Arsileus) and that such are Belisas golden virtues and rare constancie, that as imperious death cannot make her settle her affection in any other place, so there is none in the world, that can make her chaunge her minde, wherein (faire Nymph) the whole summe of my felicitie consisteth. How doth thy felicitie consist Shepherd (said she) by louing so as thou saist, when as her loue is so strongly fixed in another place? This is a strange kinde of affection, and neuer heard of before. Biâˆ£cause