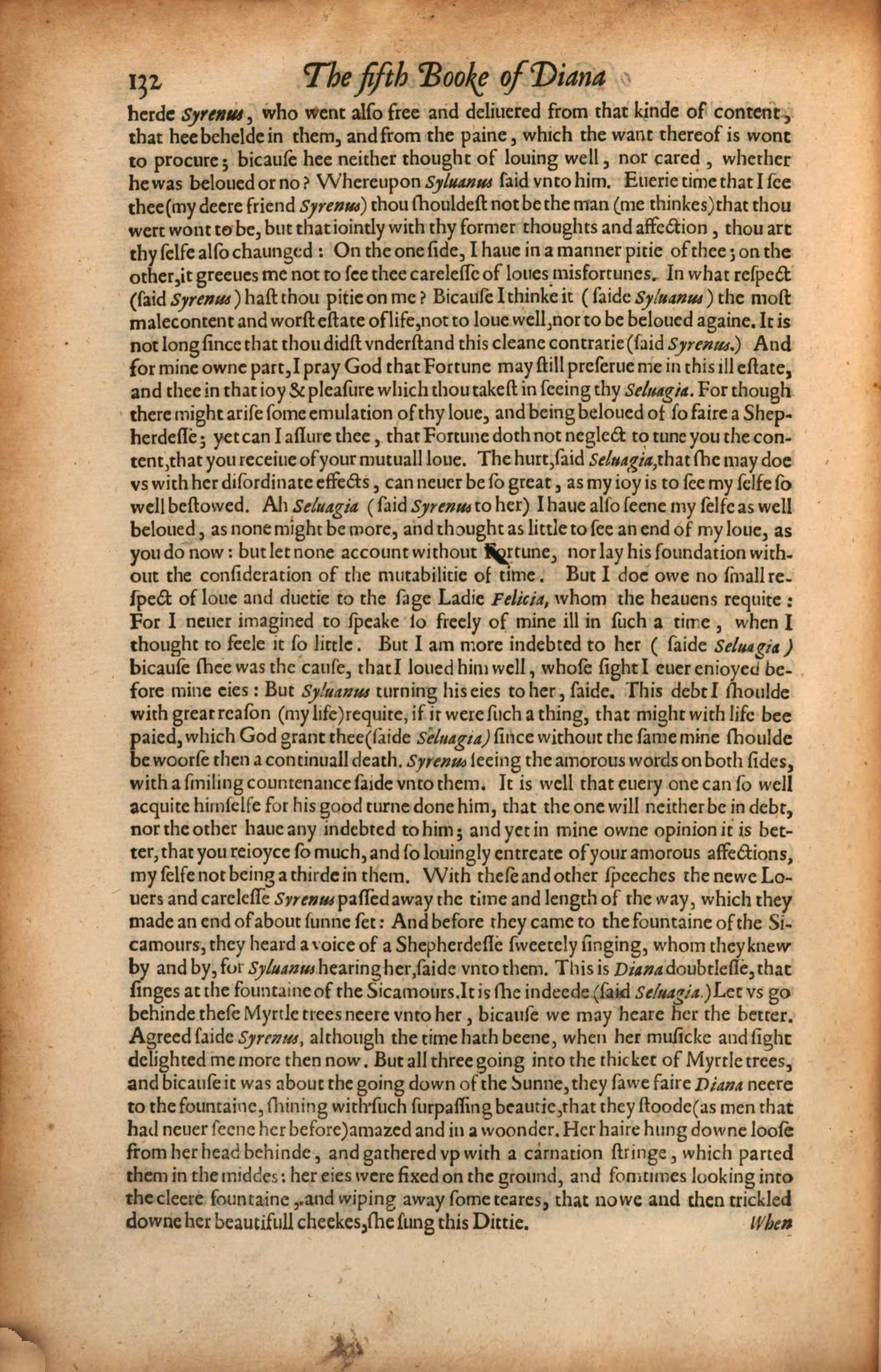 Syrenus, who went also free and deliuered from that kinde of content, that hee behelde in them, and from the paine, which the want thereof is wont to procure; bicause hee neither thought of louing well, nor cared, whether he was beloued or no? Whereupon Syluanus said vnto him. Euerie time that I see thee (my deere friend Syrenus) thou shouldest not be the man (me thinkes) that thou wert wont to be, but that iointly with thy former thoughts and affection, thou art thy selfe also chaunged: On the one side, I haue in a manner pitie of thee; on the other, it greeues me not to see thee carelesse of loues misfortunes. In what respect (said Syrenus) hast thou pitie on me? Bicause I thinke it (saide Syluanus) the most malecontent and worst estate of life, not to loue well, nor to be beloued againe. It is not long since that thou didst vnderstand this cleane contrarie (said Syrenus.) And for mine owne part, I pray God that Fortune may still preserue me in this ill estate, and thee in that ioy & pleasure which thou takest in seeing thy Seluagia. For though there might arise some emulation of thy loue, and being beloued of so faire a Shepâˆ£herdesse; yet can I assure thee, that Fortune doth not neglect to tune you the conâˆ£tent, that you receiue of your mutuall loue. The hurt, said Seluagia, that she may doe vs with her disordinate effects, can neuer be so great, as my ioy is to see my selfe so well bestowed. Ah Seluagia (said Syrenus to her) I haue also seene my selfe as well beloued, as none might be more, and thought as little to see an end of my loue, as you do now: but let none account without Fortune, nor lay his foundation withâˆ£out the consideration of the mutabilitie of time. But I doe owe no small reâˆ£spect of loue and duetie to the sage Ladie Felicia, whom the heauens requite: For I neuer imagined to speake so freely of mine ill in such a time, when I thought to feele it so little. But I am more indebted to her (saide Seluagia) bicause shee was the cause, that I loued him well, whose sight I euer enioyed beâˆ£fore mine eies: But Syluanusturning his eies to her, saide. This debt I shoulde with great reason (my life) requite, if it were such a thing, that might with life bee paied, which God grant thee (saide Seluagia) since without the same mine shoulde be woorse then a continuall death. Syrenus seeing the amorous words on both sides, with a smiling countenance saide vnto them. It is well that euery one can so well acquite himselfe for his good turne done him, that the one will neither be in debt, nor the other haue any indebted to him; and yet in mine owne opinion it is betâˆ£ter, that you reioyce so much, and so louingly entreate of your amorous affections, my selfe not being a thirde in them. With these and other speeches the newe Loâˆ£uers and carelesse Syrenus passed away the time and length of the way, which they made an end of about sunne set: And before they came to the fountaine of the Siâˆ£camours, they heard a voice of a Shepherdesse sweetely singing, whom they knew by and by, for Syluanus hearing her saide vnto them. This is Diana doubtlesse, that singes at the fountaine of the Sicamours. It is she indeede (said Seluagia.) Let vs go behinde these Myrtle trees neere vnto her, bicause we may heare her the better. Agreed saide Syrenus, although the time hath beene, when her musicke and sight delighted me more then now. But all three going into the thicket of Myrtle trees, and bicause it was about the going down of the Sunne, they sawe faire Diana neere to the fountaine, shining with such surpassing beautie, that they stoode (as men that had neuer seene her before) amazed and in a woonder. Her haire hung downe loose from her head behinde, and gathered vp with a carnation stringe, which parted them in the middes: her eies were fixed on the ground, and somtimes looking into the cleere fountaine, and wiping away some teares, that nowe and then trickled downe her beautifull cheekes, she sung this Dittie.