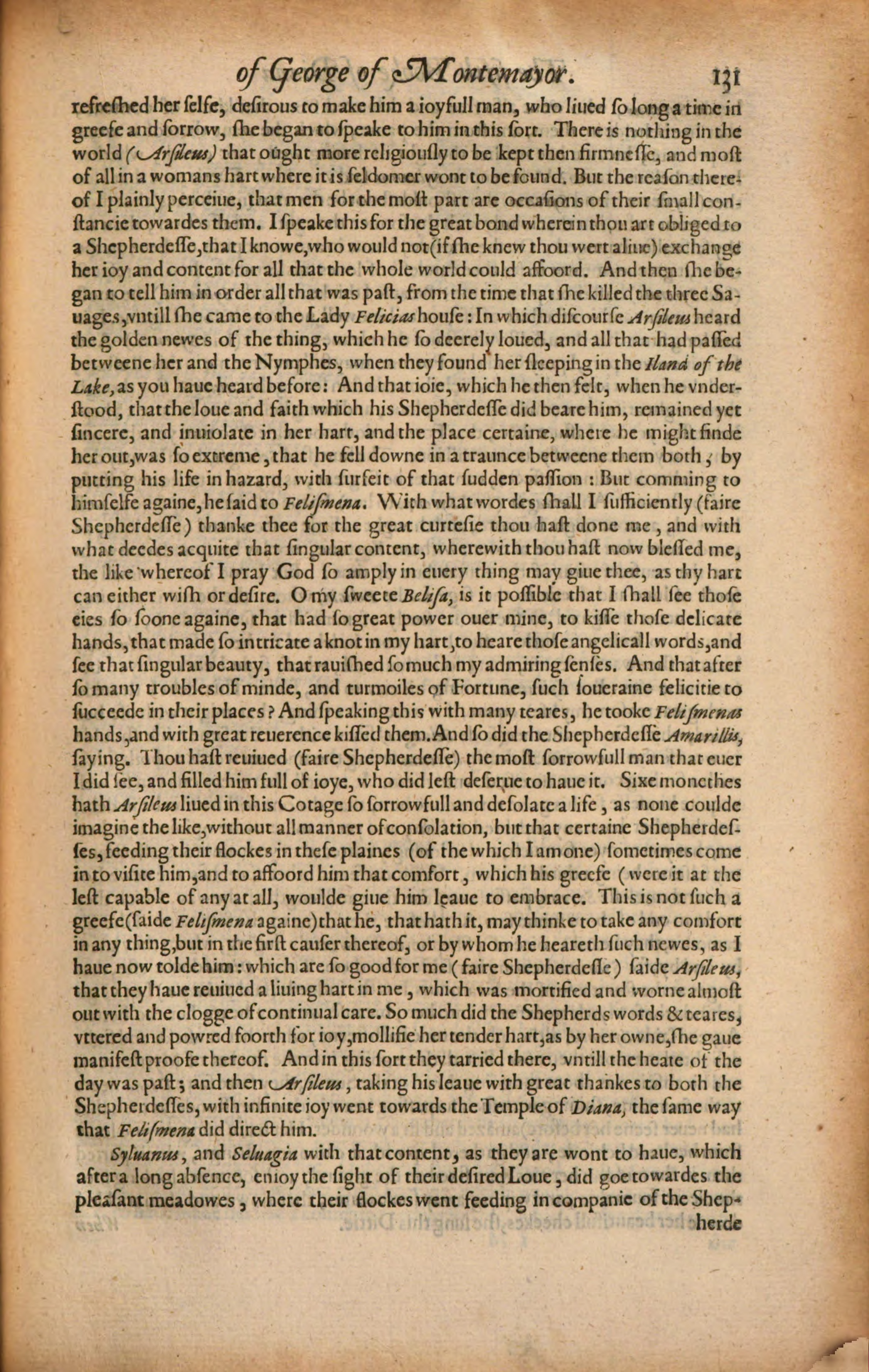 refreshed her selfe, desirous to make him a ioyfull man, who liued so long a time in greefe and sorrow, she began to speake to him in this sort. There is nothing in the world (Arsileus) that ought more religiously to be kept then firmnesse, and most of all in a womans hart where it is seldomer wont to be found. But the reason thereâˆ£of I plainly perceiue, that men for the most part are occasions of their small conâˆ£stancie towardes them. I speake this for the greatbond wherein thou art obliged to a Shepherdesse, that I knowe, who would not (if she knew thou wert aliue) exchange her ioy and content for all that the whole world could affoord. And then she beâˆ£gan to tell him in order all that was past, from the time that she killed the three Saâˆ£uages, vntill she came to the Lady Felicias house: In which discourse Arsileus heard the golden newes of the thing, which he so deerely loued, and all that had passed betweene her and the Nymphes, when they found her sleeping in the Iland of the Lake, as you haue heard before: And that ioie, which he then felt, when he vnderâˆ£stood, that the loue and faith which his Shepherdesse did beare him, remained yet sincere, and inuiolate in her hart, and the place certaine, where he might finde her out, was so extreme, that he fell downe in a traunce betweene them both, by putting his life in hazard, with surfeit of that sudden passion: But comming to himselfe againe, he said to Felismena. With what wordes shall I sufficiently (faire Shepherdesse) thanke thee for the great curtesie thou hast done me, and with what deedes acquite that singular content, wherewith thou hast now blessed me, the like whereof I pray God so amply in euery thing may giue thee, as thy hart can either wish or desire. O my sweete Belisa, is it possible that I shall see those eies so soone againe, that had so great power ouer mine, to kisse those delicate hands, that made so intricate a knot in my hart, to heare those angelicall words, and see that singular beauty, that rauished so much my admiring senses. And that after so many troubles of minde, and turmoiles of Fortune, such soueraine felicitie to succeede in their places? And speaking this with many teares, he tooke Felismenas hands, and with great reuerence kissed them. And so did the Shepherdesse Amarillis, saying. Thou hast reuiued (faire Shepherdesse) the most sorrowfull man that euer I did see, and filled him full of ioye, who did lest deserue to haue it. Sixe monethes hath Arsileus liued in this Cotage so sorrowfull and desolate a life, as none coulde imagine the like, without all manner of consolation, but that cortaine Shepherdesâˆ£ses, seeding their flockes in these plaines (of the which I am one) sometimes come in to visite him, and to affoord him that comfort, which his greefe (were it at the lest capable of any at all, woulde giue him leaue to embrace. This is not such a greefe (saide
Felismena againe) that he, that hath it, may thinke to take any comfort in any thing, but in the first causer thereof, or by whom he heareth such newes, as I haue now tolde him: which are so good for me (faire Shepherdesse) saide Arsileus, that they haue reuiued a liuing hart in me, which was mortified and worne almosT out with the clogge of continual care. So much did the Shepherds words & teares, vttered and powred foorth for ioy, mollifie her tender hart, as by her owne, she gaue manifest proofe thereof. And in this sort they tarried there, vntill the heate of the day was past; and then Arsileus, taking his leaue with great thankes to both the Shepherdesses, with infinite ioy went towards the Temple of Diana, the same way that Felismena did direct him.
Syluanus, and Seluagia with that content, as they are wont to haue, which after a long absence, enioy the sight of their desired Loue, did goe towardes the pleasant meadowes, where their flockes went feeding in companie of the Shepâˆ£herde