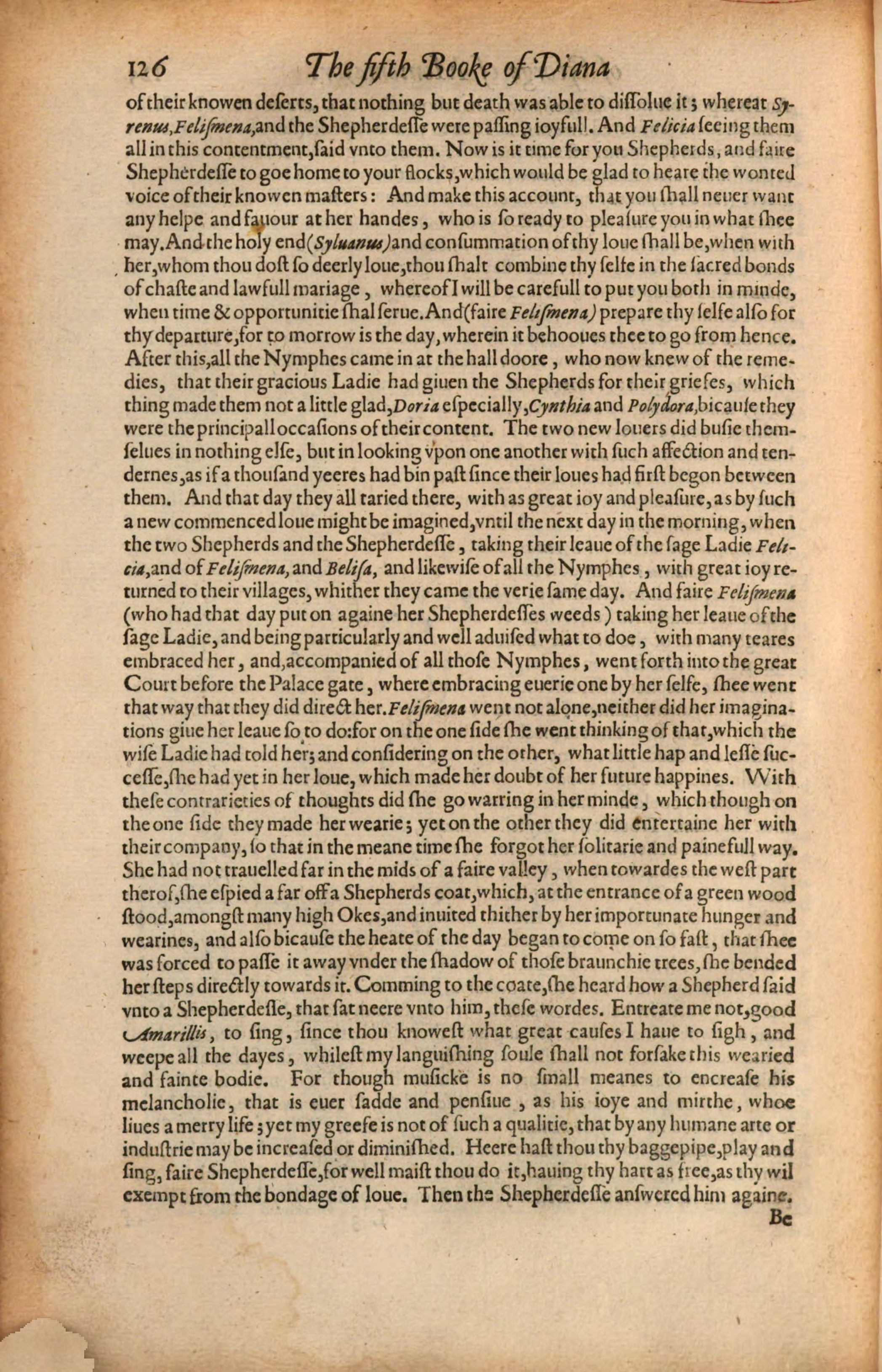 of their knowen deserts, that nothing but death was able to dissolue it; whereat Syâˆ£renus, Felismena, and the Shepherdesse were passing ioyfull. And Felioia seeing them all in this contentment, said vnto them. Now is it time for you Shepherds, and faire Shepherdesse to goe home to your flocks, which would be glad to heare the wonted voice of their knowen masters: And make this account, that you shall neuer want any helpe and fauour at her handes, who is soready to pleasure you in what shee may. And the holy end (Syluanus) and consummation of thy loue shall be, when with her, whom thou dost so deerly loue, thou shalt combine thy selfe in the sacred bonds of chaste and lawfull mariage, whereof I will be carefull to put you both in minde, when time & opportunitie shal serue. And (faire Felismena) prepare thy selfe also for thy departure, for to morrow is the day, wherein it behooues thee to go from hence. After this, all the Nymphes came in at the hall doore, who now knew of the remeâˆ£dies, that their gracious Ladie had giuen the Shepherds for their griefes, which thing made them not a little glad, Doria especially, Cynthia and Polydora, bicause they were the principall occasions of their content. The two new louers did busie themâˆ£selues in nothing else, but in looking vpon one another with such affection and tenâˆ£dernes, as if a thousand yeeres had bin past since their loues had first begon between them. And that day they all taried there, with as great ioy and pleasure, as by such a new commenced loue might be imagined, vntil the next day in the morning, when the two Shepherds and the Shepherdesse, taking their leaue of the sage Ladie Feliâˆ£cia, and of Felismena, and Belisa, and likewise of all the Nymphes, with great ioy reâˆ£turned to their villages, whither they came the verie same day. And faire Felismena (who had that day put on againe her Shepherdesses weeds) taking her leaue of the sage Ladie, and being particularly and well aduised what to doe, with many teares embraced her, and, accompanied of all those Nymphes, went forth into the great Court before the Palace gate, where embracing euerie one by her selfe, shee went that way that they did direct her. Felismena went not alone, neither did her imaginaâˆ£tions giue her leaue so to do: for on the one side she went thinking of that, which the wise Ladie had told her; and considering on the other, what little hap and lesse sucâˆ£cesse, she had yet in her loue, which made her doubt of her future happines. With these contrarieties of thoughts did she go warring in her minde, which though on the one side they made her wearie; yet on the other they did entertaine her with their company, so that in the meane time she forgot her solitarie and painefull way. She had not trauelled far in the mids of a faire valley, when towardes the west part therof, she espied a far off a Shepherds coat, which, at the entrance of a green wood stood, amongst many high Okes, and inuited thither by her importunate hunger and wearines, and also bicause the heate of the day began to come on so fast, that shee was forced to passe it away vnder the shadow of those braunchie trees, she bended her steps directly towards it. Comming to the coate, she heard how a Shepherd said vnto a Shepherdesse, that sat neere vnto him, these wordes. Entreate me not, good Amarillis, to sing, since thou knowest what great causes I haue to sigh, and weepe all the dayes, whilest my languishing soule shall not forsake this wearied and fainte bodie. For though musicke is no small meanes to encrease his melancholie, that is euer sadde and pensiue, as his ioye and mirthe, whoe liues a merry life; yet my greefe is not of such a qualitie, that by any humane arte or industrie may be increased or diminished. Heere hast thou thy baggepipe, play and sing, faire Shepherdesse, for well maist thou do it, hauing thy hart as free, as thy wil exempt from the bondage of loue. Then the Shepherdesse answered him againe.