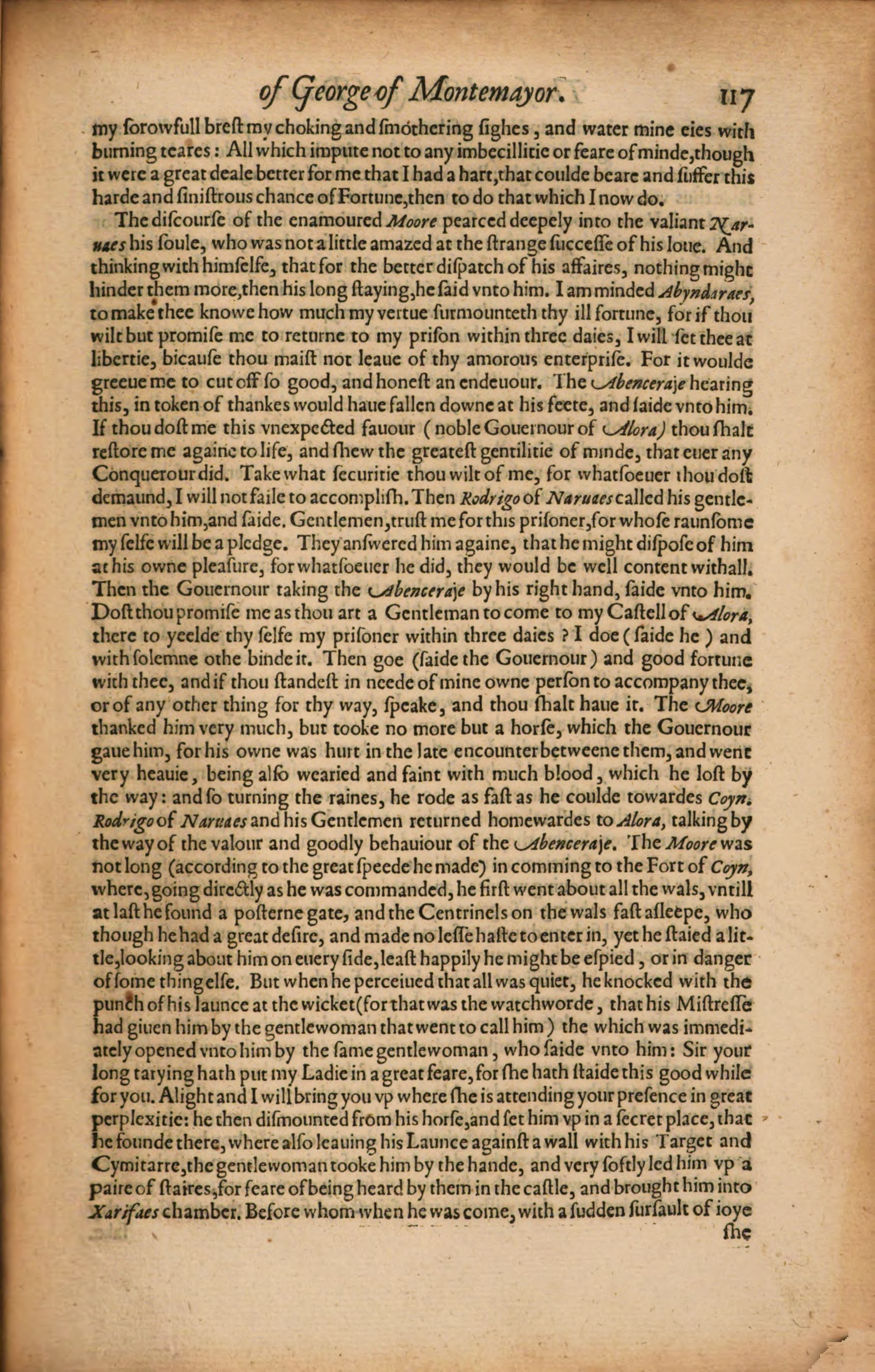 my sorowfull brest my choking and smothering sighes, and water mine eies with burning teares: All which impute not to any imbecillitie or feare of minde, though
it were a great deale better for me that I had a hart, that coulde beare and suffer this harde and sinistrous chance of Fortune, then to do that which I now do.
The discourse of the enamoured Moore pearced deepely into the valiant Narâˆ£
uaes his soule, who was not a little amazed at the strange successe of his loue. And thinking with himselfe, that for the better dispatch of his affaires, nothing might hinder them more, then his long staying, he said vnto him. I am minded Abyndaraes, to make thee knowe how much my vertue surmounteth thy ill fortune, for if thou
wilt but promise me to returne to my prison within three daies, I will set thee at libertie, bicause thou maist not leaue of thy amotous enterprise. For it woulde
greeue me to cut off so good, and honest an endeuour. The Abenceraje hearing
this, in token of thankes would haue fallen downe at his feete, and saide vnto him.
If thou dost me this vnexpected fauour (noble Gouernour of Alora) thou shalt
restore me againe to life, and shew the greatest gentilitie of minde, that euer any Conquerour did. Take what securitie thou wilt of me, for whatsoeuer thou dost demaund, I will not faile to accomplish. Then Rodrigo of Naruaes called his gentleâˆ£
men vnto him, and saide. Gentlemen, trust me for this prisoner, for whose raunsome my selfe will be a pledge. They answered him againe, that he might dispose of him at his owne pleasure, for whatsoeuer he did, they would be well content withall.
Then the Gouernour taking the Abenceraje by his right hand, saide vnto him.
Dost thou promise me as thou art a Gentleman to come to my Castell of Alora,
there to yeelde thy selfe my prisoner within three daies? I doe (saide he) and
with solemne othe binde it. Then goe (saide the Gouernour) and good fortune
with thee, and if thou standest in neede of mine owne person to accompany thee, or of any other thing for thy way, speake, and thou shalt haue it. The Moore
thanked him very much, but tooke no more but a horse, which the Gouernour
gaue him, for his owne was hurt in the late encounter betweene them, and went
very heauie, being also wearied and faint with much blood, which he lost by
the way: and so turning the raines, he rode as fast as he coulde towardes Coyn.
Rodrigo of Naruaes and his Gentlemen returned homewardes to Alora, talking by the way of the valour and goodly behauiour of the Abenceraje. The Moore was not long (according to the great speede he made) in comming to the Fort of Coyn, where, going directly as he was commanded, he first went about all the wals, vntill at last he found a posterne gate, and the Centrinels on the wals fast asleepe, who though he had a great desire, and made no lesse haste to enter in, yet he staied a litâˆ£tle, looking about him on euery side, least happily he might be espied, or in danger of some thing else. But when he perceiued that all was quiet, he knocked with the punch of his launce at the wicket (for that was the watchworde, that his Mistresse had giuen him by the gentlewoman that went to call him) the which was immediâˆ£ately opened vnto him by the same gentlewoman, who saide vnto him: Sir your long tarying hath put my Ladie in a great feare, for she hath staide this good while for you. Alight and I will bring you vp where she is attending your presence in great perplexitie: he then dismounted from his horse, and set him vp in a secret place, that he founde there, where also leauing his Launce against a wall with his Target and Cymitarre, the gentlewoman tooke him by the hande, and very softly led him vp a paire of staires, for feare of being heard by them in the castle, and brought him into Xarifaes chamber. Before whom when he was come, with a sudden sursault of ioye