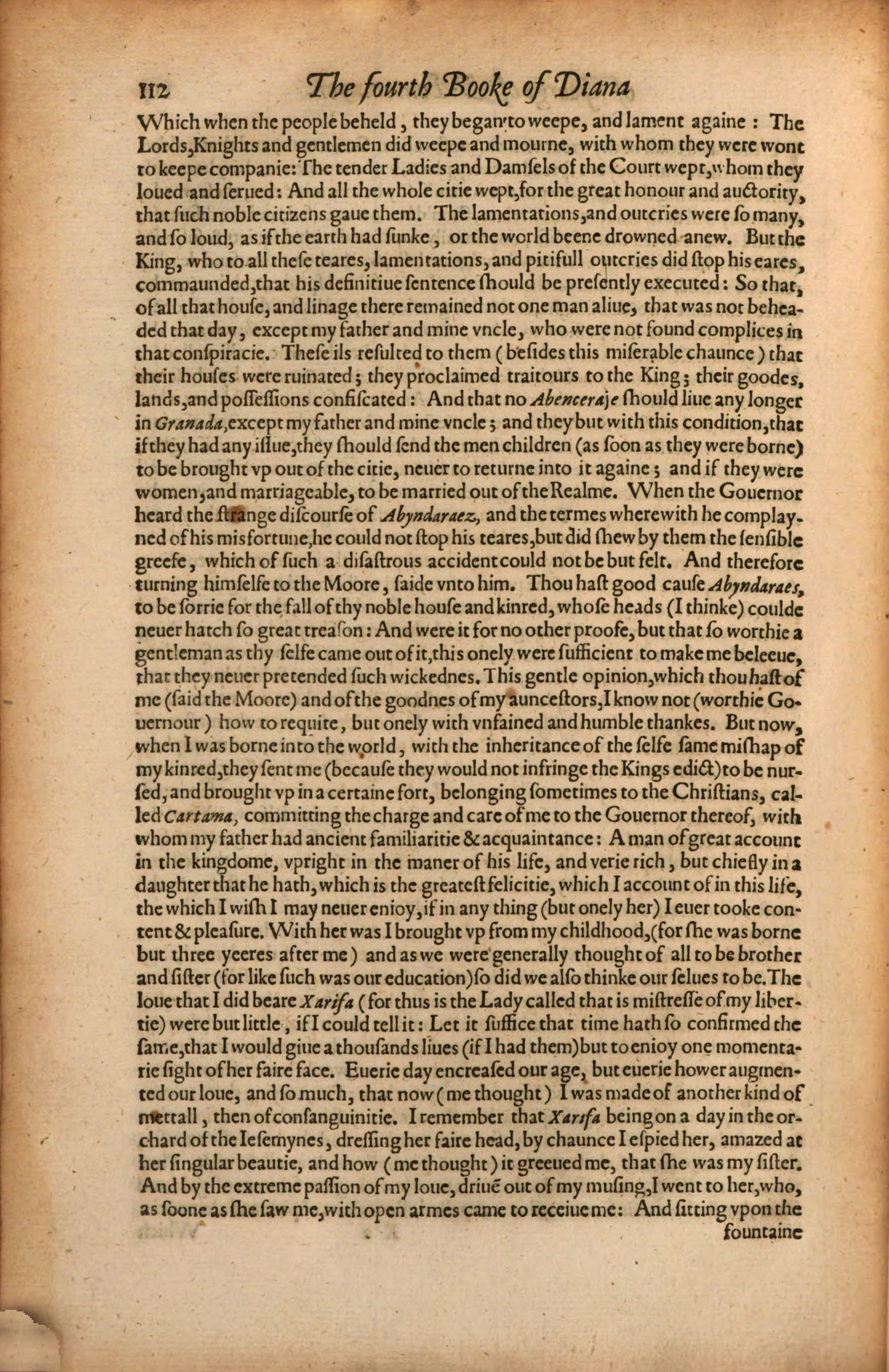 Which when the people beheld, they began to weepe, and lament againe: The Lords, Knights and gentlemen did weepe and mourne, with whom they were wont to keepe companie: The tender Ladies and Damsels of the Court wept, whom they loued and serued: And all the whole citie wept, for the great honour and auctority, that such noble citizens gaue them. The lamentations, and outcries were so many, and so loud, as if the earth had sunke, or the world beene drowned anew. But the King, who to all these teares, lamentations, and pitifull outcries did stop his eares, commaunded, that his definitiue sentence should be presently executed: So that, of all that house, and linage there remained not one man aliue, that was not beheaâˆ£ded that day, except my father and mine vncle, who were not found complices in that conspiracie. These ils resulted to them (besides this miserable chaunce) that their houses were ruinated; they proclaimed traitours to the King; their goodes, lands, and possessions confiscated: And that no Abenceraje should liue any longer in Granada, except my father and mine vncle; and they but with this condition, that if they had any issue, they should send the men children (as soon as they were borne) to be brought vp out of the citie, neuer to returne into it againe; and if they were women, and marriageable, to be married out of the Realme. When the Gouernor heard the strange discourse of Abyndaraez, and the termes wherewith he complayâˆ£ned of his misfortune, he could not stop his teares, but did shew by them the sensible greefe, which of such a disastrous accident could not be but felt. And therefore turning himselfe to the Moore, saide vnto him. Thou hast good cause Abyndaraes, to be sorrie for the fall of thy noble house and kinred, whose heads (I thinke) coulde neuer hatch so great treason: And were it for no other proofe, but that so worthie a gentleman as thy selfe came out of it, this onely were sufficient to make me beleeue, that they neuer pretended such wickednes. This gentle opinion, which thou hast of me (said the Moore) and of the goodnes of my auncestors, I know not (worthie Goâˆ£uernour) how to requite, but onely with vnfained and humble thankes. But now, when I was borne into the world, with the inheritance of the selfe same mishap of my kinred, they sent me (because they would not infringe the Kings edict) to be nurâˆ£sed, and brought vp in a certaine fort, belonging sometimes to the Christians, calâˆ£led Cartama, committing the charge and care of me to the Gouernor thereof, with whom my father had ancient familiaritie & acquaintance: A man of great account in the kingdome, vpright in the maner of his life, and verie rich, but chiefly in a daughter that he hath, which is the greatest felicitie, which I account of in this life, the which I wish I may neuer enioy, if in anything (but onely her) I euer tooke conâˆ£tent & pleasure. With her was I brought vp from my childhood, (for she was borne but three yeeres after me) and as we were generally thought of all to be brother and sister (for like such was our education) so did we also thinke our selues to be. The loue that I did beare Xarifa (for thus is the Lady called that is mistresse of my liberâˆ£tie) were but little, if I could tell it: Let it suffice that time hath so confirmed the same, that I would giue a thousands liues (if I had them) but to enioy one momentaâˆ£rie sight of her faire face. Euerie day encreased our age, but euerie hower augmenâˆ£ted our loue, and so much, that now (me thought) I was made of another kind of mettall, then of consanguinitie. I remember that Xarifa being on a day in the orâˆ£chard of the Iesemynes, dressing her faire head, by chaunce I espied her, amazed at her singular beautie, and how (me thought) it greeued me, that she was my sister. And by the extreme passion of my loue, driueÌ„ out of my musing, I went to her, who, as soone as she saw me, with open armes came to receiue me: And sitting vpon the