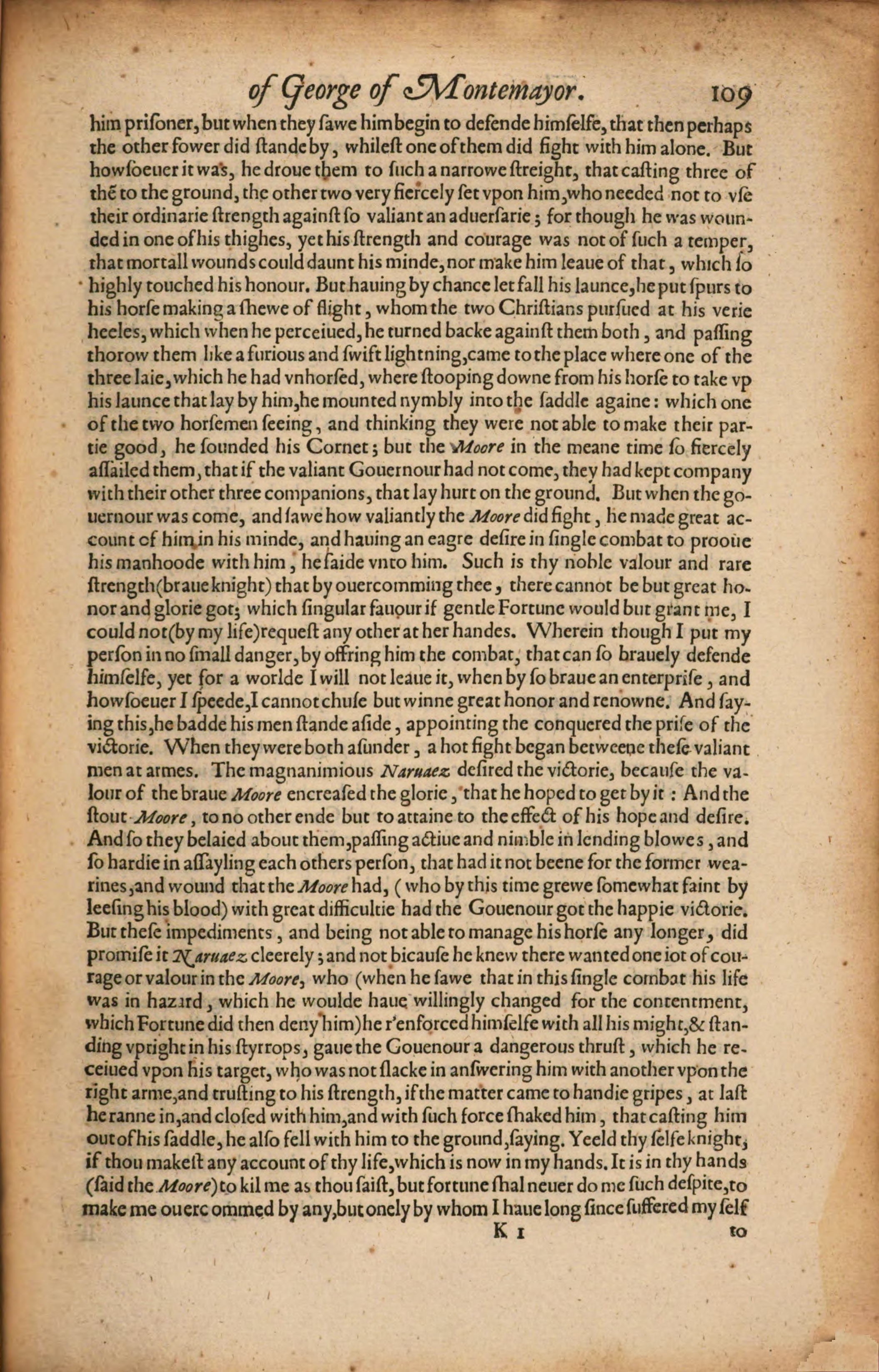 him prisoner, but when they sawe him begin to defende himselfe, that then perhaps the other fower did stande by, whilest one of them did fight with him alone. But howsoeuer it was, he droue them to such a narrowe streight, that casting three of theÌ„ to the ground, the other two very fiercely set vpon him, who needed not to vse their ordinarie strength against so valiant an aduersarie; for though he was wounâˆ£ded in one of his thighes, yet his strength and courage was not of such a temper, that mortall wounds could daunt his minde, nor make him leaue of that, which so highly touched his honour. But hauing by chance let fall his launce, he put spurs to his horse making a shewe of flight, whom the two Christians pursued at his verie heeles, which when he perceiued, he turned backe against them both, and passing thorow them like a furious and swift lightning, came to the place where one of the three laie, which he had vnhorsed, where stooping downe from his horse to take vp his launce that lay by him, he mounted nymbly into the saddle againe: which one of the two horsemen seeing, and thinking they were not able to make their parâˆ£tie good, he sounded his Cornet; but the Moore in the meane time so fiercely assailed them, that if the valiant Gouernour had not come, they had kept company with their other three companions, that lay hurt on the ground. But when the goâˆ£uernour was come, and sawe how valiantly the Moore did fight, he made great acâˆ£count of him in his minde, and hauing an eagre desire in single combat to prooue his manhoode with him, he saide vnto him. Such is thy noble valour and rare strength (braue knight) that by ouercomming thee, there cannot be but great hoâˆ£nor and glorie got; which singular fauour if gentle Fortune would but grant me, I could not (by my life) request any other at her handes. Wherein though I put my person in no small danger, by offring him the combat, that can so brauely defende himselfe, yet for a worlde I will not leaue it, when by so braue an enterprise, and howsoeuer I speede, I cannot chuse but winne great honor and renowne. And sayâˆ£ing this, he badde his men stande aside, appointing the conquered the prise of the victorie. When they were both asunder, a hot fight began betweene these valiant men at armes. The magnanimious Narudez desired the victorie, because the vaâˆ£lour of the braue Moore encreased the glorie, that he hoped to get by it: And the stout Moore, to no other ende but to attaine to the effect of his hope and desire. And so they belaied about them, passing actiue and nimble in lending blowes, and so hardie in assayling each others person, that had it not beene for the former weaâˆ£rines, and wound that the Moore had, (who by this time grewe somewhat faint by leesing his blood) with great difficultie had the Gouenour got the happie victorie. But these impediments, and being not able to manage his horse any longer, did promise it Naruaez cleerely; and not bicause he knew there wanted one iot of couâˆ£rage or valour in the Moore, who (when he sawe that in this single combat his life was in hazard, which he woulde haue willingly changed for the contentment, which Fortune did then deny him) he râ€™enforced himselfe with all his might, & stanâˆ£ding vptight in his styrrops, gaue the Gouenour a dangerous thrust, which he reâˆ£ceiued vpon his target, who was not slacke in answering him with another vpon the right arme, and trusting to his strength, if the matter came to handie gripes, at last he ranne in, and closed with him, and with such force shaked him, that casting him out of his saddle, he also fell with him to the ground, saying. Yeeld thy selfe knight, if thou makest any account of thy life, which is now in my hands. It is in thy hands (said the Moore) to kil me as thou saist, but fortune shal neuer do me such despite, to make me ouercommed by any, but onely by whom I haue long since suffered my self