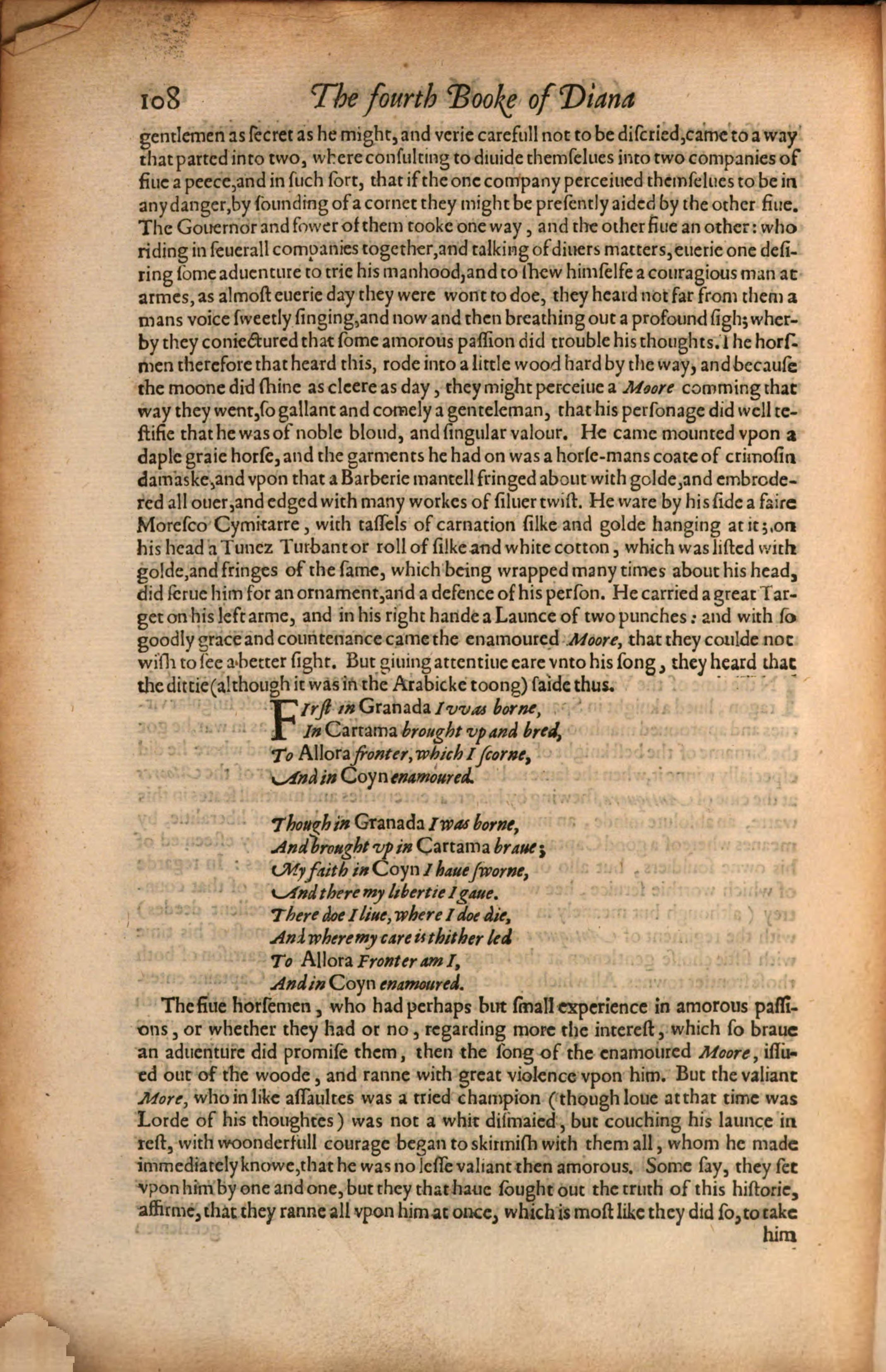 gentlemen as secret as he might, and verie carefull not to be discried, came to a way that parted into two, where consulting to diuide themselues into two companies of fiue a peece, and in such sort, that if the one company perceiued themselues to be in any danger, by sounding of a cornet they might be presently aided by the other fiue. The Gouernor and fower of them tooke one way, and the other fiue an other: who riding in seuerall companies together, and talking of diuers matters, euerie one desiâˆ£ring some aduenture to trie his manhood, and to shew himselfe a couragious man at armes, as almost euerie day they were wont to doe, they heard not far from them a mans voice sweetly singing, and now and then breathing out a profound sigh; wherâˆ£by they coniectured that some amorous passion did trouble his thoughts. The horsâˆ£men therefore that heard this, rode into a little wood hard by the way, and because the moone did shine as cleere as day, they might perceiue a Moore comming that way they went, so gallant and comely a genteleman, that his personage did well teâˆ£stifie that he was of noble bloud, and singular valour. He came mounted vpon a daple graie horse, and the garments he had on was a horse-mans coate of crimosin damaske, and vpon that a Barberie mantell fringed about with golde, and embrodeâˆ£red all ouer, and edged with many workes of siluer twist. He ware by his side a faire Moresco Cymitarre, with tassels of carnation silke and golde hanging at it; on his head a Tunez Turbant or roll of silke and white cotton, which was listed with golde, and fringes of the same, which being wrapped many times about his head, did serue him for an ornament, and a defence of his person. He carried a great Tarâˆ£get on his left arme, and in his right hande a Launce of two punches: and with so goodly grace and countenance came the enamoured Moore, that they coulde not wish to see a better sight. But giuing attentiue eare vnto his song, they heard that the dittie (although it was in the Arabicke toong) saide thus.

Though in Granada I was borne,
And brought vp in Cartama braue;
My faith in Coyn I haue sworne,
And there my libertie I gaue.
There doe I liue, where I doe die,
And where my care is thither led
To Allora Fronter am I,
And in Coyn enamoured.

The fiue horsemen, who had perhaps but small experience in amorous passiâˆ£ons, or whether they had or no, regarding more the interest, which so braue an aduenture did promise them, then the song of the enamoured Moore, issuâˆ£ed out of the woode, and ranne with great violence vpon him. But the valiant More, who in like assaultes was a tried champion (though loue at that time was Lorde of his thoughtes) was not a whit dismaied, but couching his launce in rest, with woonderfull courage began to skitmish with them all, whom he made immediately knowe, that he was no lesse valiant then amorous. Some say, they set vpon him by one and one, but they that haue sought out the truth of this historie, assirme, that they ranne all vpon him at once, which is most like they did so, to take