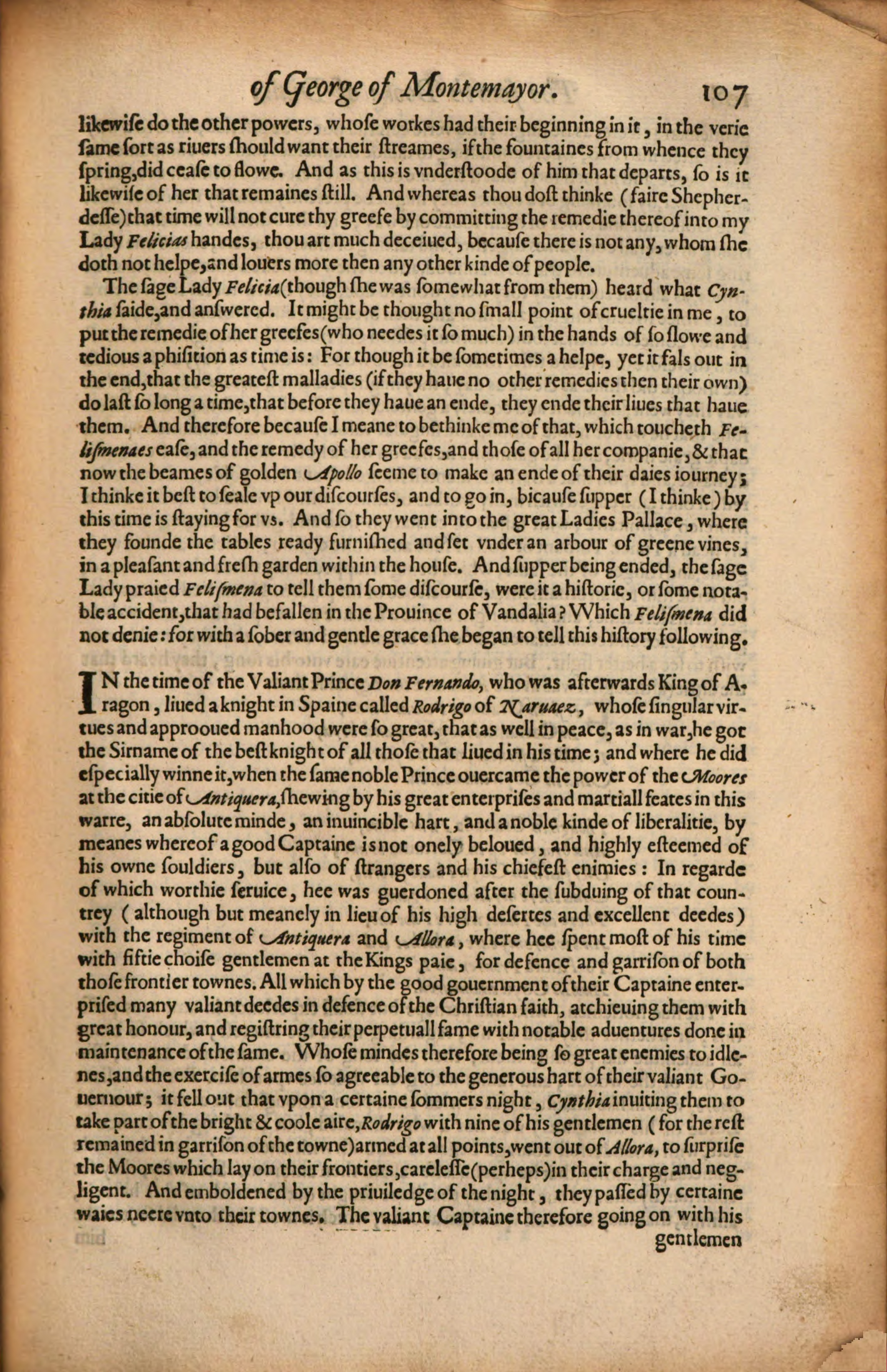 likewise do the other powers, whose workes had their beginning in it, in the verie same sort as riuers should want their streames, if the fountaines from whence they spring, did cease to flowe. And as this is vnderstoode of him that departs, so is it likewise of her that remaines still. And whereas thou dost thinke (faire Shepherâˆ£
desse) that time will not cure thy greefe by committing the remedie thereof into my Lady Felicias handes, thou art much deceiued, because there is not any, whom she doth not helpe, and louers more then any other kinde of people.
The sage Lady Felicia (though she was somewhat from them) heard what Cynâˆ£
thia saide, and answered. It might be thought no small point of crueltie in me, to put the remedie of her greefes (who needes it so much) in the hands of so slowe and tedious a phisition as time is: For though it be sometimes a helpe, yet it fals out in the end, that the greatest malladies (if they haue no other remedies then their own) do last so long a time that before they haue an ende, they ende their liues that haue them. And therefore because I meane to be thinke me of that, which toucheth Feâˆ£
lismenaes ease, and the remedy of her greefes, and those of all her companie, & that now the beames of golden Apollo seeme to make an ende of their daies iourney; I thinke it best to seale vp our discourses, and to go in, bieause supper (I thinke) by this time is staying for vs. And so they went into the great Ladies Pallace, where they founde the tables ready furnished and set vnder an arbour of greene vines, in a pleasant and fresh garden within the house. And supper being ended, the sage Lady praied Felismena to tell them some discourse, were it a historie, or some notaâˆ£ble accident, that had befallen in the Prouince of Vandalia? Which Felismena did not denie: for with a sober and gentle grace she began to tell this history following.

IN the time of the Valiant Prince Don Fernando, who was afterwards King of Aâˆ£ragon, liued a knight in Spaine called Rodriga of Naruaez, whose singular virâˆ£tues and approoued manhood were so great, that as well in peace, as in war, he got the Sirname of the best knight of all those that liued in his time; and where he did especially winne it, when the same noble Prince ouercame the power of the Moores at the citie of Antiquera, shewing by his great enterprises and martiall feates in this warre, an absolute minde, an inuincible hart, and a noble kinde of liberalitie, by meanes whereof a good Captaine is not onely beloued, and highly esteemed of his owne souldiers, but also of strangers and his chiefest enimies: In regarde of which worthie seruice, hee was guerdoned after the subduing of that counâˆ£trey (although but meanely in lieu of his high desertes and excellent deedes) with the regiment of Antiquera and Allora, where hee spent most of his time with fiftie choise gentlemen at the Kings paie, for defence and garrison of both those frontier townes. All which by the good gouernment of their Captaine enterâˆ£prised many valiant deedes in defence of the Christian faith, atchieuing them with great honour, and registring the in perpetuall same with notable aduentures done in mainrenance of the same. Whose mindes therefore being so great enemies to idleâˆ£nes, and the exercise of armes so agreeable to the generous hart of their valiant Goâˆ£uernour; it fell out that vpon a certaine sommers night, Cynthiainuiting them to take part of the bright & coole aire, Rodrigo with nine of his gentlemen (for therest remained in garrison of the towne) armed at all points, went out of Allora, to surprise the Moores which lay on their frontiers, carelesse (perheps) in their charge and negâˆ£ligent. And emboldened by the priuiledge of the night, they passed by certaine waies neere vnto their townes. The valiant Captaine therefore going on with his