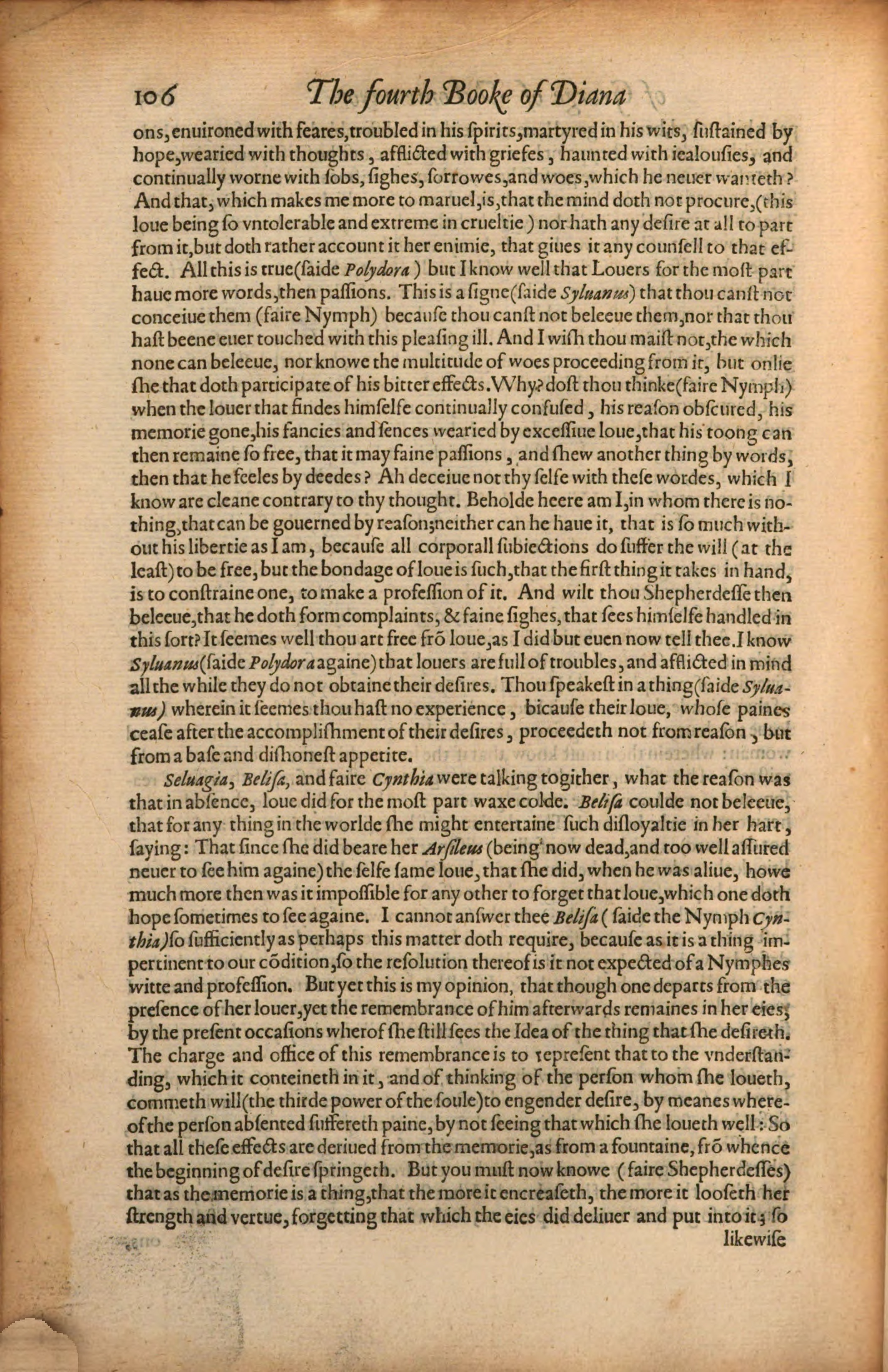 enuironed with feares, troubled in his spirits, martyred in his wits, sustained by hope, wearied with thoughts, afflicted with griefes, haunted with iealousies, and continually worne with sobs, sighes, sorrowes, and woes, which he neuer wanteth? And that, which makes me more to maruel, is, that the mind doth not procure, (this loue being so vntolerable and extreme in crueltie) nor hath any desire at all to part from it, but doth rather account it her enimie, that giues it any counsell to that efâˆ£fect. All this is true (saide Polydora) but I know well that Louers for the most part haue more words, then passions. This is a signe (saide Syluanus) that thou canst not conceiue them (faire Nymph) because thou canst not beleeue them, nor that thou hast beene euer touched with this pleasing ill. And I wish thou maist not, the which none can beleeue, nor knowe the multitude of woes proceeding from it, but onlie she that doth participate of his bitter effects. Why? dost thou thinke (faire Nymph) when the louer that findes himselfe continually confused, his reason obscured, his memorie gone, his fancies and sences wearied by excessiue loue, that his toong can then remaine so free, that it may faine passions, and shew another thing by words, then that he feeles by deedes? Ah deceiue not thy selfe with these wordes, which I know are cleane contrary to thy thought. Beholde heere am I, in whom there is noâˆ£thing, that can be gouerned by reason; neither can he haue it, that is so much withâˆ£out his libertie as I am, because all corporall subiections do suffer the will (at the least) to be free, but the bondage of loue is such, that the first thing it takes in hand, is to constraine one, to make a profession of it. And wilt thou Shepherdesse then beleeue, that he doth form complaints, & faine sighes, that sees himselfe handled in this sort? It seemes well thou art free froÌ„ loue, as I did but euen now tell thee. I know Syluanus (saide Polydor a againe) that louers are full of troubles, and afflicted in mind all the while they do not obtaine their desires. Thou speakest in a thing (saide Syluaâˆ£nus) wherein it seemes thou hast no experience, bicause their loue, whose paines cease after the accomplishment of their desires, proceedeth not from reason, but from a base and dishonest appetite.
Seluagia, Belisa, and faire Cynthia were talking togither, what the reason was that in absence, loue did for the most part waxe colde. Belisa coulde not beleeue, that for any thing in the worlde she might entertaine such disloyaltie in her hart, saying: That since she did beare her Arsileus (being now dead, and too well assured neuer to see him againe) the selfe same loue, that she did, when he was aliue, howe much more then was it impossible for any other to forget that loue, which one doth hope sometimes to see againe. I cannot answer thee Belisa (saide the Nymph Cynâˆ£thia) so sufficiently as perhaps this matter doth require, because as it is a thing imâˆ£pertinent to our coÌ„dition, so the resolution thereof is it not expected of a Nymphes witte and profession. But yet this is my opinion, that though one departs from the presence of her louer, yet the remembrance of him afterwards remaines in her eies, by the present occasions wherof she still sees the Idea of the thing that she desireth. The charge and office of this remembrance is to represent that to the vnderstanâˆ£ding, which it conteineth in it, and of thinking of the person whom she loueth, commeth will (the thirde power of the soule) to engender desire, by meanes whereâˆ£of the person absented suffereth paine, by not seeing that which she loueth well. So that all these effects are deriued from the memorie, as from a fountaine, froÌ„ whence the beginning of desire springeth. But you must now knowe (faire Shepherdesses) that as the memorie is a thing, that the more it encreaseth, the more it looseth her strength and vertue, for getting that which the eies did deliuer and put into it; so