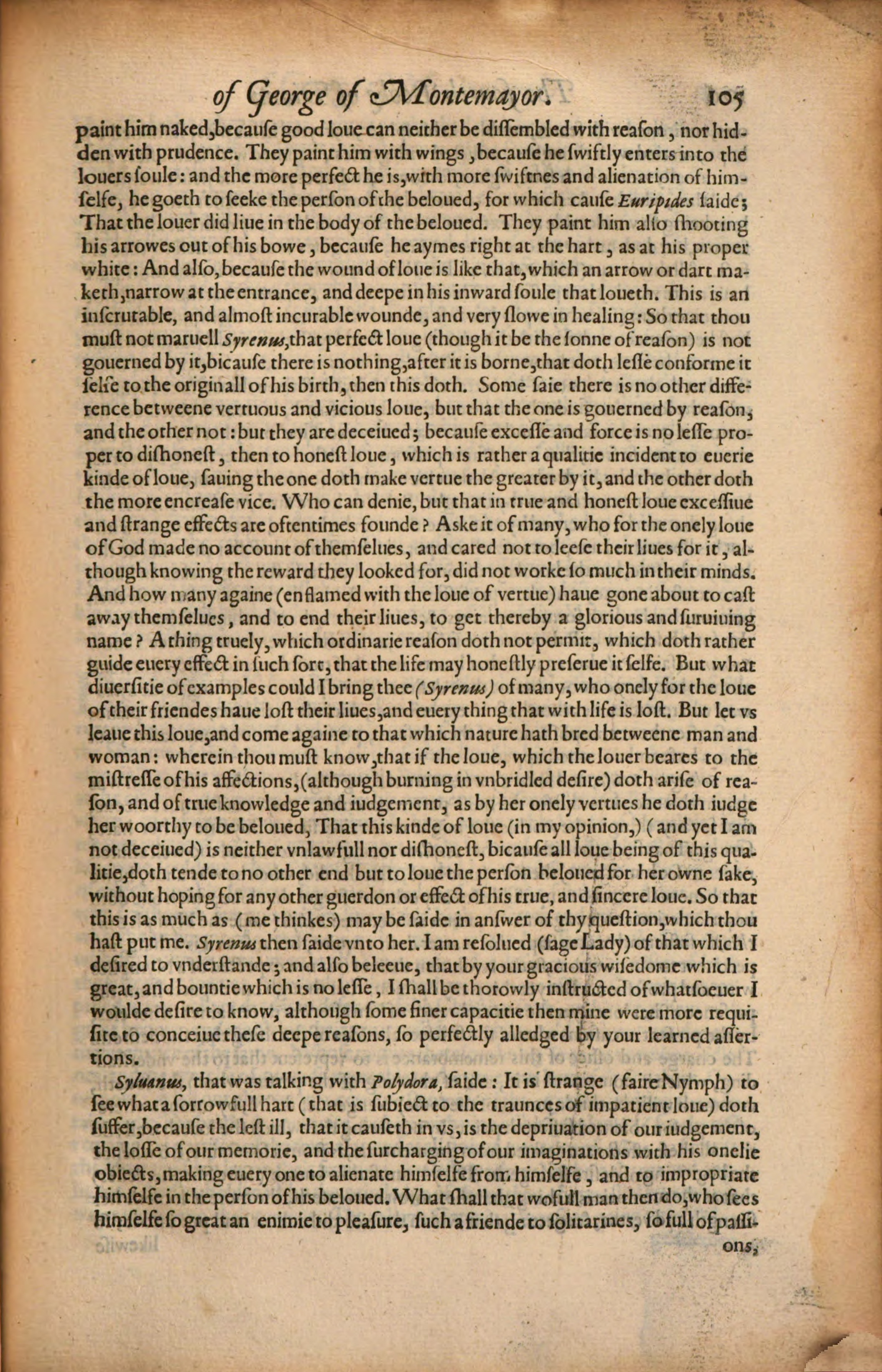 paint him naked, because good loue can neither be dissembled with reason, nor hidâˆ£den with prudence. They paint him with wings, because he swiftly enters into the louers soule: and the more perfect he is, with more swiftnes and alienation of himâˆ£selfe, he goeth to seeke the person of the beloued, for which cause Euripides saide; That the louer did liue in the body of the beloued. They paint him also shooting his arrowes out of his bowe, because he aymes right at the hart, as at his proper white: And also, because the wound of loue is like that, which an arrow or dart maâˆ£keth, narrow at the entrance, and deepe in his inward soule that loueth. This is an inscrutable, and almost incurable wounde, and very slowe in healing: So that thou must not maruell Syrenus, that perfect loue (though it be the sonne of reason) is not gouerned by it, bicause there is nothing, after it is borne, that doth lesse conforme it selfe to the originall of his birth, then this doth. Some saie there is no other diffeâˆ£rence betweene vertuous and vicious loue, but that the one is gouerned by reason, and the other not: but they are deceiued; because excesse and force is no lesse proâˆ£per to dishonest, then to honest loue, which is rather a qualitie incident to euerie kinde of loue, sauing the one doth make vertue the greater by it, and the other doth the more encrease vice. Who can denie, but that in true and honest loue excessiue and strange effects are oftentimes founde? Aske it of many, who for the onely loue of God made no account of themselues, and cared not to leese their liues for it, alâˆ£though knowing the reward they looked for, did not worke Io much in their minds. And how many againe (enflamed with the loue of vertue) haue gone about to cast away themselues, and to end their liues, to get thereby a glorious and suruiuing name? A thing truely, which ordinarie reason doth not permit, which doth rather guide euery effect in such sort, that the life may honestly preserue it selfe. But what diuersitie of examples could I bring thee (Syrenus) of many, who onely for the loue of their friendes haue lost their liues, and euery thing that with life is lost. But let vs leaue this loue, and come againe to that which nature hath bred betweene man and woman: wherein thou must know, that if the loue, which the louer beares to the mistresse of his affections, (although burning in vnbridled desire) doth arise of reaâˆ£son, and of true knowledge and iudgement, as by her onely vertues he doth iudge her woorthy to be beloued, That this kinde of loue (in my opinion,) (and yet I am not deceiued) is neither vnlawfull nor dishonest, bicause all loue being of this quaâˆ£litie, doth tende to no other end but to loue the person beloued for her owne sake, without hoping for any other guerdon or effect of his true, and sincere loue. So that this is as much as (me thinkes) may be saide in answer of thy question, which thou hast put me. Syrenus then saide vnto her. I am resolued (sage Lady) of that which I desired to vnderstande; and also belceue, that by your gracious wisedome which is great, and bountie which is no lesse, I shall be thorowly instructed of whatsoeuer I woulde desire to know, although some finer capacitie then mine were more requiâˆ£site to conceiue these deepe reasons, so perfectly alledged by your learned asserâˆ£tions.
Syluenus, that was talking with Polydora, saide: It is strange (faire Nymph) to see what a sorrowfull hart (that is subiect to the traunces of impatient loue) doth suffer, because the lest ill, that it causeth in vs, is the depriuation of our iudgement, the losse of our memorie, and the surcharging of our imaginations with his onelse obiects, making euery one to alienate himselfe Iron, himselfe, and to impropriate himselfe in the person of his beloued. What shall that wofull man then do, who sees himselfe so great an enimie to pleasure, such a friende to solitarines, so full of passiâˆ£ons,