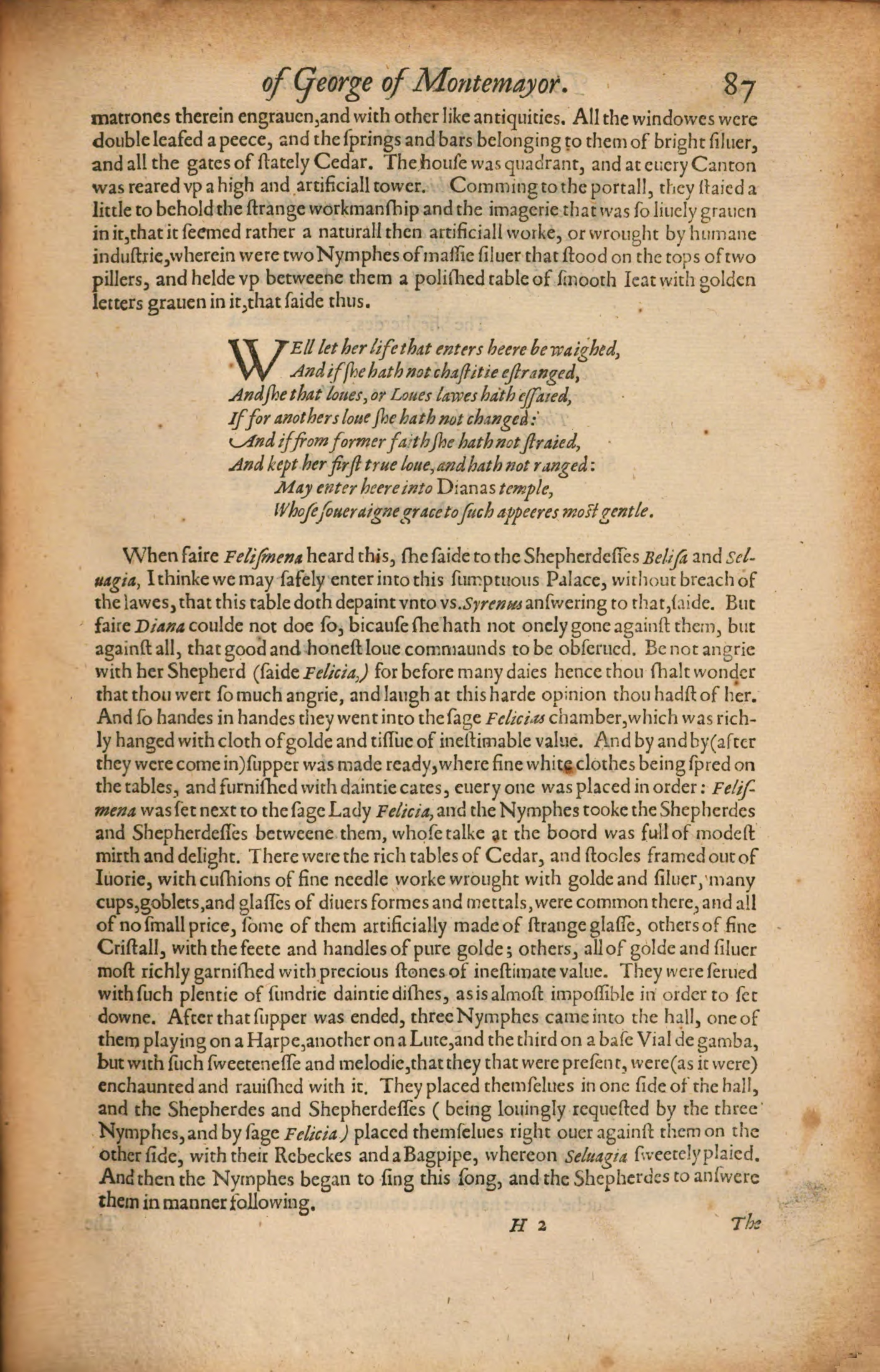 matrones therein engrauen, and with other like antiquities. All the windowes were double leafed a peece, and the springs and bars belonging to them of bright siluer, and all the gates of stately Cedar. The house was quadrant, and at euery Canton was reared vp a high and artificiall tower. Comming to the portall, they staied a little to behold the strange workmanship and the imagerie that was so liuely grauen in it, that it seemed rather a naturall then artificiall worke, or wrought by humane industrie, wherein were two Nymphes of massie siluer that stood on the tops of two pillers, and helde vp betweene them a polished table of smooth Ieat with golden letters grauen in it, that saide thus.

WEll let her life that enters heere be waighed,
And if she hath not chastitie estranged,
And she that loues, or Loues lawes hath essaied,
If for anothers loue she hath not changed:
And if from former faith she hath not straied,
And kept her first true loue, and hath not ranged:
May enter heere into Dianas temple,
Whose soueraigne grace to such appeeres most gentle.

When faire Felismena heard this, she saide to the Shepherdesses Belisaand Selâˆ£uagia, I thinke we may safely enter into this sumptuous Palace, without breach of the lawes, that this table doth depaint vnto vs. Syrenus answering to that, saide. But faire Diana coulde not doe so, bicause she hath not onely gone against them, but against all, that good and honest loue commaunds to be obserued. Be not angrie with her Shepherd (saide Felicia,) for before many daies hence thou shalt wonder that thou wert so much angrie, and laugh at this harde opinion thou hadst of her. And so handes in handes they went into the sage Felicias chamber, which was richâˆ£ly hanged with cloth of golde and tissue of inestimable value. And by and by (after they were come in) supper was made ready, where fine white clothes being spred on the tables, and furnished with daintie cates, euery one was placed in order: Felisâˆ£mena was set next to the sage Lady Felicia, and the Nymphes tooke the Shepherdes and Shepherdesses betweene them, whose talke at the boord was full of modest mirth and delight. There were the rich tables of Cedar, and stooles framed out of Iuorie, with cushions of fine needle worke wrought with golde and siluer, many cups, goblets, and glasses of diuers formes and mettals, were common there, and all of no small price, some of them artificially made of strange glasse, others of fine Cristall, with the feete and handles of pure golde; others, all of golde and siluer most richly garnished with precious stones of inestimate value. They were serued with such plentie of sundrie daintie dishes, as is almost impossible in order to set downe. After that supper was ended, three Nymphes came into the hall, one of them playing on a Harpe, another on a Lute, and the third on a base Vial de gamba, but with such sweetenesse and melodie, that they that were present, were (as it were) enchaunted and rauished with it. They placed themselues in one side of the hall, and the Shepherdes and Shepherdesses (being louingly requested by the three Nymphes, and by sage Felicia) placed themselues right ouer against them on the other side, with their Rebeckes and a Bagpipe, whereon Seluagia sweetely plaied. And then the Nymphes began to sing this song, and the Shepherdes to answere them in manner following.