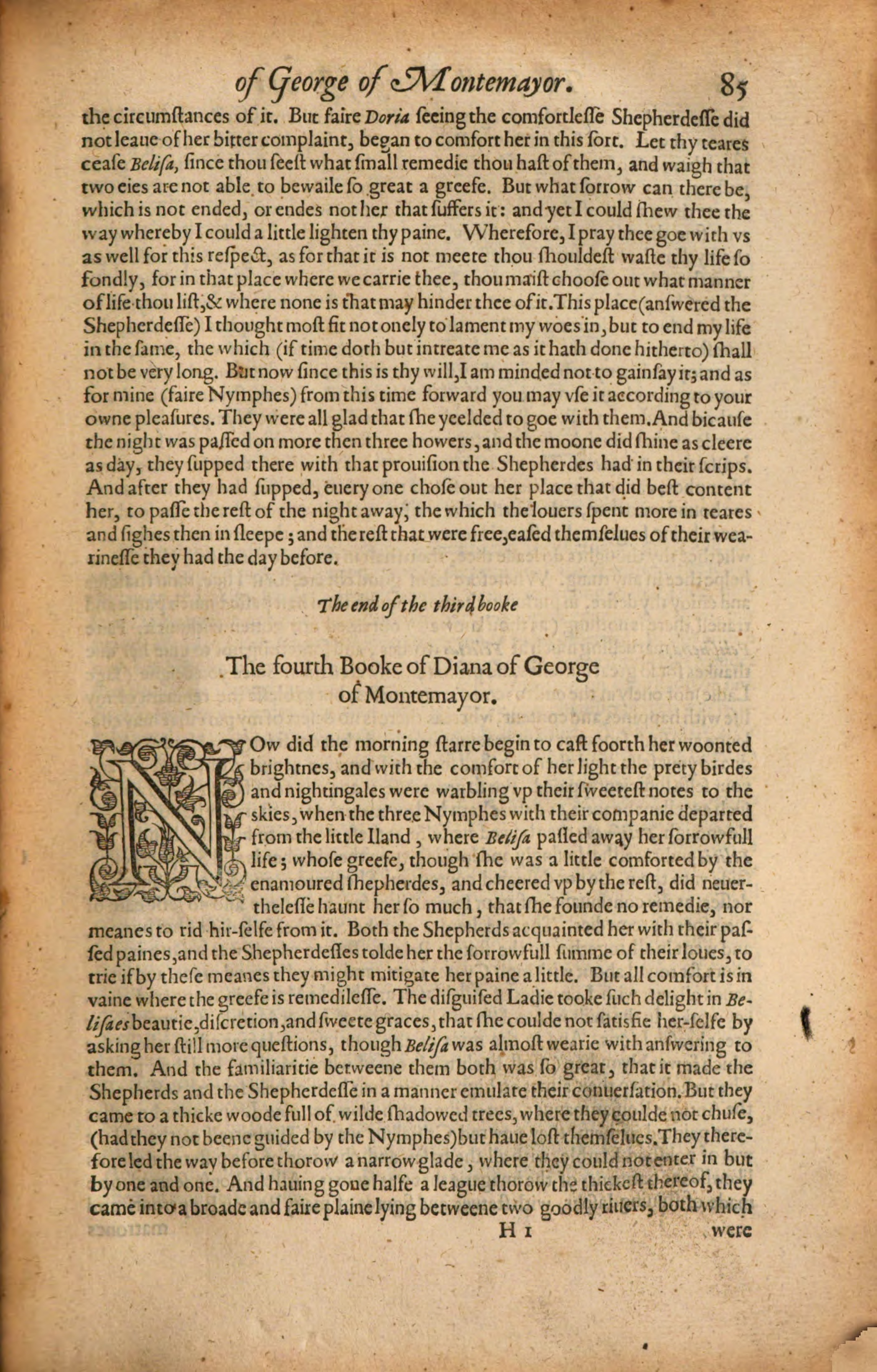 the circumstances of it. But faire Doria seeing the comfortlesse Shepherdesse did not leaue of her bitter complaint, began to comfort her in this sort. Let thy teares cease Belisa,since thou seest what small remedie thou hast of them, and waigh that two eies are not able to bewaile so great a greefe. But what sorrow can there be, which is not ended, or endes not her that suffers it: and yet I could shew thee the way whereby I could a little lighten thy paine. Wherefore, I pray thee goe with vs as well for this respect, as for that it is not meete thou shouldest waste thy life so fondly, for in that place where we carrie thee, thou maist choose out what manner of life thou list, & where none is that may hinder thee of it. This place (answered the Shepherdesse) I thought most fit not onely to lament my woes in, but to end my life in the same, the which (if time doth but intreate me as it hath done hitherto) shall not be very long. But now since this is thy will, I am minded not to gainsay it; and as for mine (faire Nymphes) from this time forward you may vse it according to your owne pleasures. They were all glad that she yeelded to goe with them. And bicause the night was passed on more then three howers, and the moone did shine as cleere as day, they supped there with that prouision the Shepherdes had in their scrips. And after they had supped, euery one chose out her place that did best content her, to passe the rest of the night away, the which the louers spent more in teares and sighes then in sleepe; and the rest that were free, eased themselues of their weaâˆ£rinesse they had the day before.

The end of the third booke

The fourth Booke of Diana of George
of Montemayor.

NOw did the morning starre begin to cast foorth her woonted brightnes, and with the comfort of her light the prety birdes and nightingales were warbling vp their sweetest notes to the skies, when the three Nymphes with their companie departed from the little Iland, where Belisa passed away her sorrowfull life; whose greefe, though she was a little comforted by the enamoured shepherdes, and cheered vp by the rest, did neuerâˆ£thelesse haunt her so much, that she founde no remedie, nor meanes to rid hir-selfe from it. Both the Shepherds acquainted her with their pasâˆ£sed paines, and the Shepherdesses tolde her the sorrowfull summe of their loues, to trie if by these meanes they might mitigate her paine a little. But all comfort is in vaine where the greefe is remedilesse. The disguised Ladie tooke such delight in Beâˆ£lisaes beautie, discretion, and sweete graces, that she coulde not satisfie her-selfe by asking her still more questions, though Belisa was almost wearie with answering to them. And the familiaritie betweene them both was so great, that it made the Shepherds and the Shepherdesse in a manner emulate their conuersation. But they came to a thicke woode full of wilde shadowed trees, where they coulde not chuse, (had they not beene guided by the Nymphes) but haue lost themselues. They thereâˆ£fore led the way before thorow a narrow glade, where they could not enter in but by one and one. And hauing gone halfe a league thorow the thickest thereof, they came into a broade and faire plaine lying betweene two goodly riuers, both which