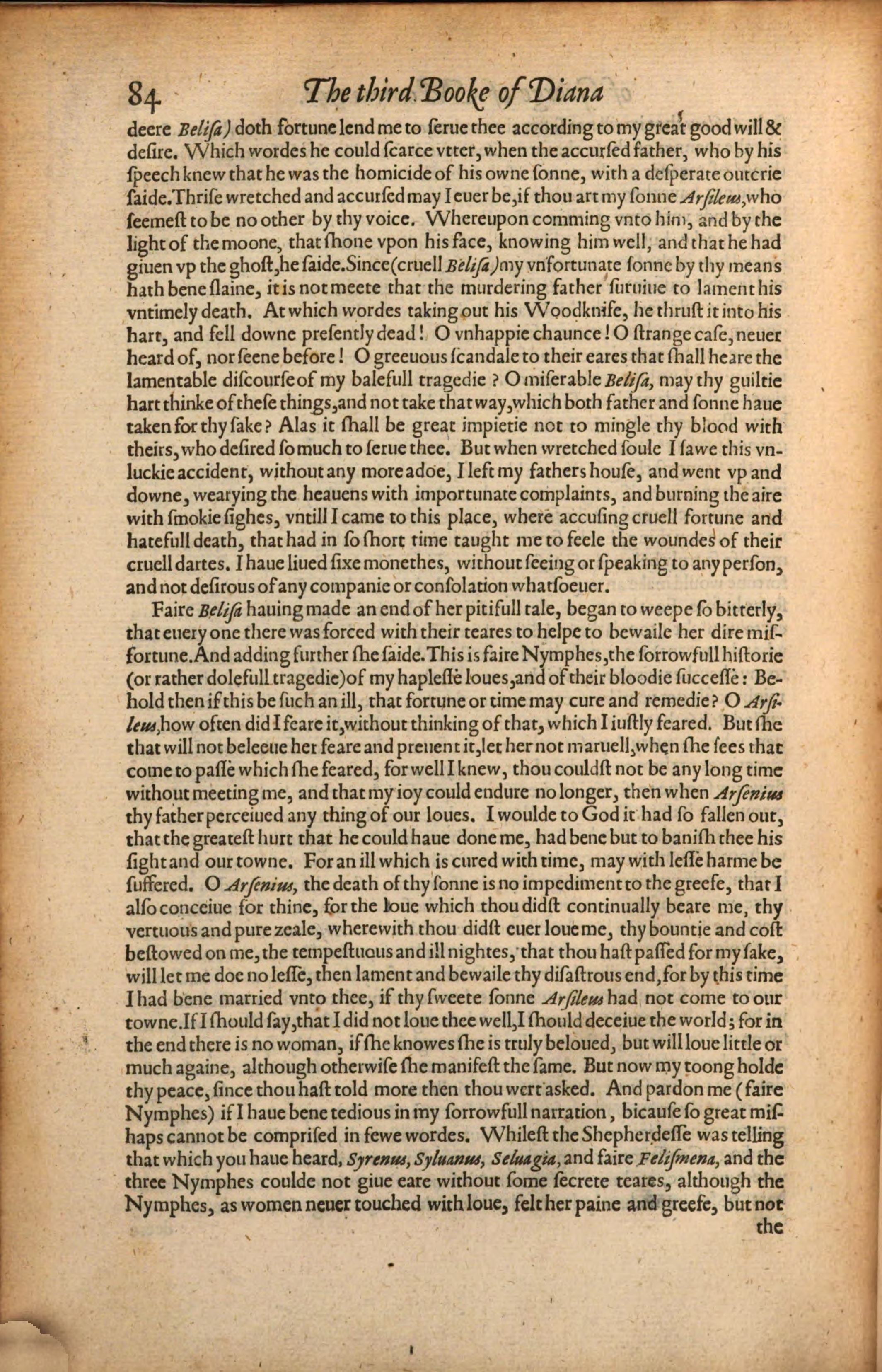 deere Belisa) doth fortune lend me to serue thee according to my great good will & desire. Which wordes he could scarce vtter, when the accursed father, who by his speech knew that he was the homicide of his owne sonne, with a desperate outcrie saide. Thrise wretched and accursed may I euer be, if thou art my sonne Arsileus, who seemest to be no other by thy voice. Whereupon comming vnto him, and by the light of the moone, that shone vpon his face, knowing him well, and that he had giuen vp the ghost, he saide. Since (cruell Belisa) my vnfortunate sonne by thy means hath bene slaine, it is not meete that the murdering father suruiue to lament his vntimely death. At which wordes taking out his Woodknife, he thrust it into his hart, and fell downe presently dead! O vnhappie chaunce! O strange case, neuer heard of, nor seene before! O greeuous scandale to their eares that shall he are the lamentable discourse of my balefull tragedie? O miserable Belisa, may thy guiltie hart thinke of these things, and not take that way, which both father and sonne haue taken for thy sake? Alas it shall be great impietie not to mingle thy blood with theirs, who desired so much to serue thee. But when wretched soule I sawe this vnâˆ£luckie accident, without any more adoe, I left my fathers house, and went vp and downe, wearying the heauens with importunate complaints, and burning the aire with smokie sighes, vntill I came to this place, where accusing cruell fortune and hatefull death, that had in so short time taught me to feele the woundes of their cruell dartes. I haue liued sixe monethes, without seeing or speaking to any person, and not desirous of any companie or consolation whatsoeuer.
Faire Belisa hauing made an end of her pitifull tale, began to weepe so bitterly, that euery one there was forced with their teares to helpe to bewaile her dire misâˆ£fortune. And adding further she saide. This is faire Nymphes, the sorrowfull historie (or rather dolefull tragedie) of my haplesse loues, and of their bloodie successe: Beâˆ£hold then if this be such an ill, that fortune or time may cure and remedie? O Arsiâˆ£leus, how often did I feare it, without thinking of that, which I iustly feared. But she that will not beleeue her feare and preuent it, let her not maruell, when she sees that come to passe which she feared, for well I knew, thou couldst not be any long time without meeting me, and that my ioy could endure no longer, then when Arsenius thy father perceiued any thing of our loues. I woulde to God it had so fallen out, that the greatest hurt that he could haue done me, had bene but to banish thee his sight and our towne. For an ill which is cured with time, may with lesse harme be suffered. O Arsenius, the death of thy sonne is no impediment to the greefe, that I also conceiue for thine, for the loue which thou didst continually beare me, thy vertuous and pure zeale, wherewith thou didst euer loue me, thy bountie and cost bestowed on me, the tempestuous and ill nightes, that thou hast passed for my sake, will let me doe no lesse, then lament and bewaile thy disastrous end, for by this time I had bene married vnto thee, if thy sweete sonne Arsileus had not come to our towne. If I should say, that I did not loue thee well, I should deceiue the world; for in the end there is no woman, if she knowes she is truly beloued, but will loue little or much againe, although otherwise she manifest the same. But now my toong holde thy peace, since thou hast told more then thou wert asked. And pardon me (faire Nymphes) if I haue bene tedious in my sorrowfull narration, bicause so great misâˆ£haps cannot be comprised in fewe wordes. Whilest the Shepherdesse was telling that which you haue heard, Syrenus, Syluanus, Seluagia, and faire Felismena, and the three Nymphes coulde not giue eare without some secrete teares, although the Nymphes, as women neuer touched with loue, felt her paine and greefe, but not