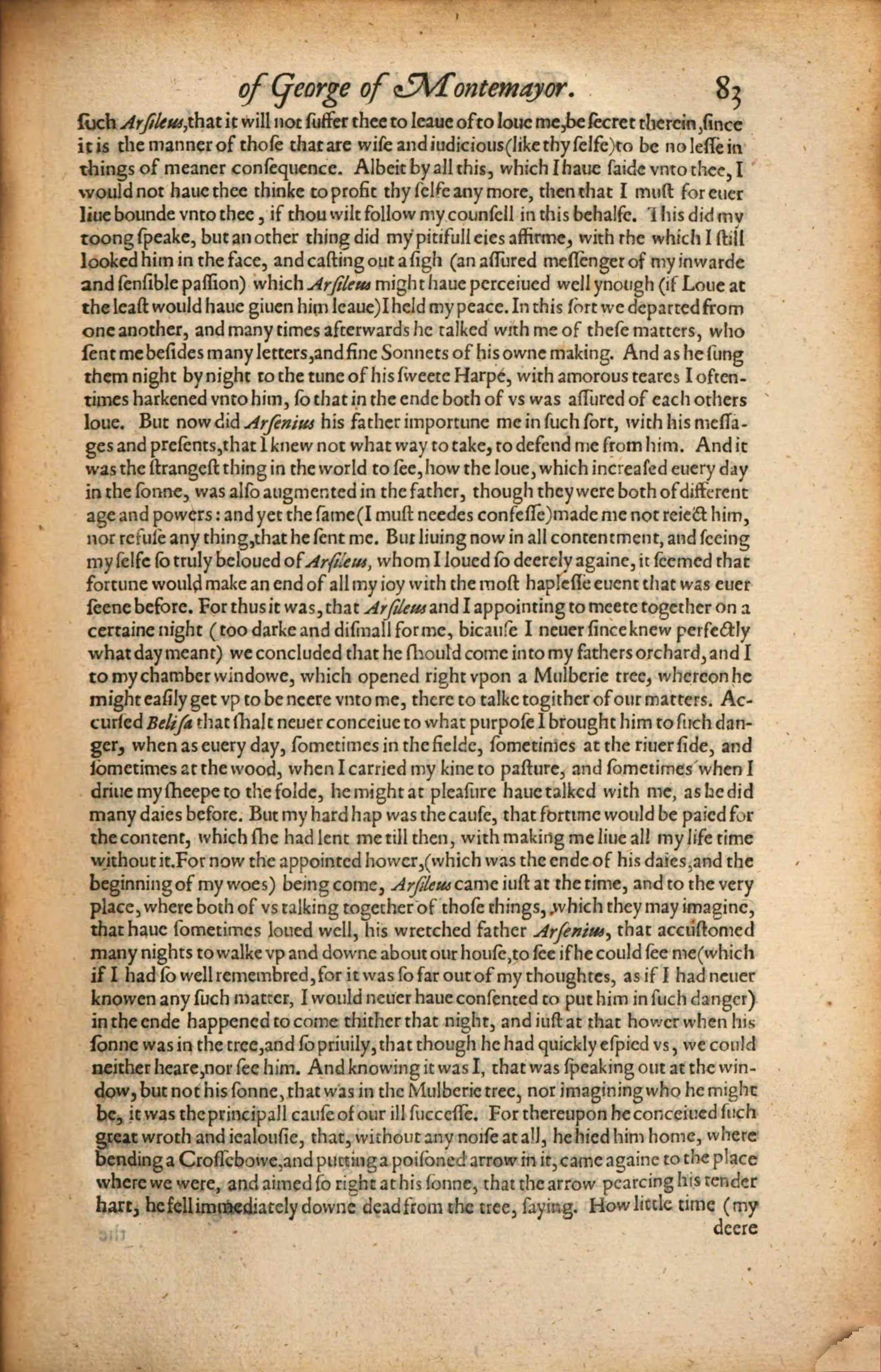 such Arsileus, that it will not suffer thee to leaue of to loue me, be secret therein, since it is the manner of those that are wise and iudicious (like thy selfe) to be no lesse in things of meaner consequence. Albeit by all this, which I haue saide vnto thee, I would not haue thee thinke to profit thy selfe any more, then that I must for euer liue bounde vnto thee, if thou wilt follow my counsell in this behalfe. This did my toong speake, but an other thing did my pitifull eies affirme, with the which I still looked him in the face, and casting out a sigh (an assured messenger of my inwarde and sensible passion) which Arsileus might haue perceiued well ynough (if Loue at the least would haue giuen him leaue) I held my peace. In this sort we departed from one another, and many times afterwards he talked with me of these matters, who sent me besides many letters, and fine Sonnets of his owne making. And as he sung them night by night to the tune of his sweete Harpe, with amorous teares I oftenâˆ£times harkened vnto him, so that in the ende both of vs was assured of each others loue. But now did Arsenius his father importune me in such sort, with his messaâˆ£ges and presents, that I knew not what way to take, to defend me from him. And it was the strangest thing in the world to see, how the loue, which increased euery day in the sonne, was also augmented in the father, though they were both of different age and powers: and yet the same (I must needes confesse) made me not reiect him, nor refuse any thing, that he sent me. But liuing now in all contentment, and seeing my selfe so truly beloued of Arsileus, whom I loued so deerely againe, it seemed that fortune would make an end of all my ioy with the most haplesse euent that was euer seene before. For thus it was, that Arsileus and I appointing to meete together on a certaine night (too darke and dismall for me; bicause I neuer since knew perfectly what day meant) we concluded that he should come into my fathers orchard, and I to my chamber windowe, which opened right vpon a Mulberie tree, whereon he might easily get vp to be necre vnto me, there to talke togither of our matters. Acâˆ£cursed Belisa that shalt neuer conceiue to what purpose I brought him to such danâˆ£ger, when as euery day, sometimes in the fielde, sometimes at the riuer side, and sometimes at the wood, when I carried my kine to pasture, and sometimes when I driue my sheepe to the folde, he might at pleasure haue talked with me, as he did many daies before. But my hard hap was the cause, that fortune would be paied for the content, which she had lent me till then, with making me liue all my life time without it. For now the appointed hower, (which was the ende of his daies, and the beginning of my woes) being come, Arsileus came iust at the time, and to the very place, where both of vs talking together of those things, which they may imagine, that haue sometimes loued well, his wretched father Arsenius, that accustomed many nights to walke vp and downe about our house, to see if he could see me (which if I had so well remembred, for it was so far out of my thoughtes, as if I had neuer knowen any such matter, I would neuer haue consented to put him in such danger) in the ende happened to come thither that night, and iust at that hower when his sonne was in the tree, and so priuily, that though he had quickly espied vs, we could neither heare, nor see him. And knowing it was I, that was speaking out at the winâˆ£dow, but not his sonne, that was in the Mulberie tree, not imagining who he might be, it was the principall cause of our ill successe. For thereupon he conceiued such great wroth and iealousie, that, without any noise at all, he bied him home, where bending a Crossebowe, and putting a poisoned arrow in it, came againe to the place where we were, and aimed so right at his sonne, that the arrow pearcing his tender hart, he fell immediately downe dead from the tree, saying. How little time (my