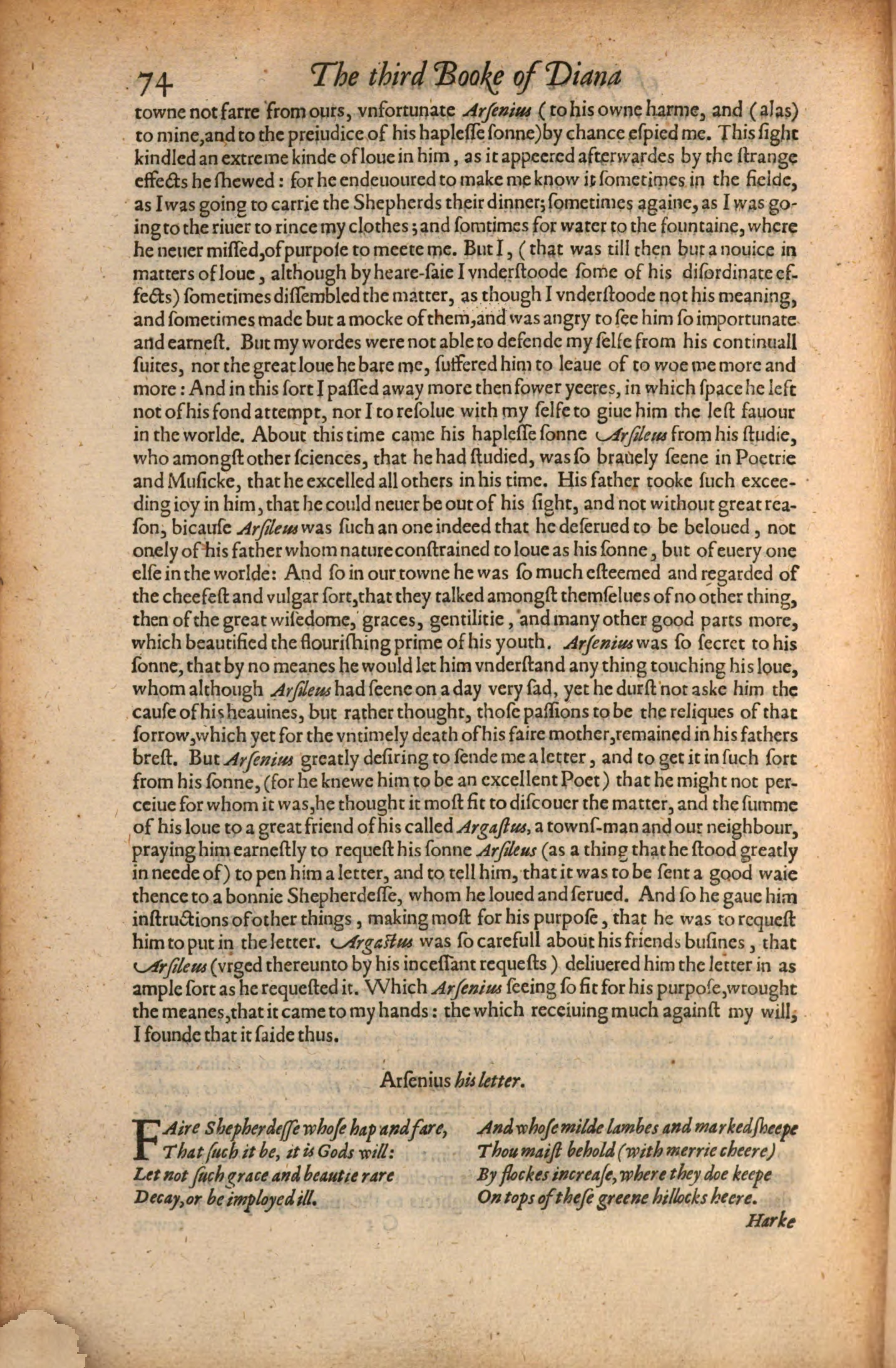 towne not farre from ours, vnfortunate Arsenius (to his owne harme, and (alas) to mine, and to the preiudice of his haplesse sonne) by chance espied me. This sight kindled an extreme kinde of loue in him, as it appeered afterwardes by the strange effects he shewed: for he endeuoured to make me know it sometimes in the fielde, as I was going to carrie the Shepherds their dinner; sometimes againe, as I was goâˆ£ing to the riuer to rince my clothes; and somtimes for water to the fountaine, where he neuer missed, of purpose to meete me. But I, (that was till then but a nouice in matters of loue, although by heare-saie I vnderstoode some of his disordinate efâˆ£fects) sometimes dissembled the matter, as though I vnderstoode not his meaning, and sometimes made but a mocke of them, and was angry to see him so importunate and earnest. But my wordes were not able to defende my selfe from his continuall suites, nor the great loue he bare me, suffered him to leaue of to woe me more and more: And in this sort I passed away more then fower yeeres, in which space he left not of his fond attempt, nor I to resolue with my selfe to giue him the lest fauour in the worlde. About this time came his haplesse sonne Arsileus from his studie, who amongst other sciences, that he had studied, was so brauely seene in Poetrie and Musicke, that he excelled all others in his time. His father tooke such exceeâˆ£ding ioy in him, that he could neuer be out of his sight, and not without great reaâˆ£son, bicause Arsileus was such an one indeed that he deserued to be beloued, not onely of his father whom nature constrained to loue as his sonne, but of euery one else in the worlde: And so in our towne he was so much esteemed and regarded of the cheefest and vulgar sort, that they talked amongst themselues of no other thing, then of the great wisedome, graces, gentilitie, and many other good parts more, which beautified the flourishing prime of his youth. Arsenius was so secret to his sonne, that by no meanes he would let him vnderstand any thing touching his loue, whom although Arsileus had seene on a day very sad, yet he durst not aske him the cause of his heauines, but rather thought, those passions to be the reliques of that sorrow, which yet for the vntimely death of his faire mother, remained in his fathers brest. But Arsenius greatly desiring to sende me a letter, and to get it in such sort from his sonne, (for he knewe him to be an excellent Poet) that he might not perâˆ£ceiue for whom it was, he thought it most fit to discouer the matter, and the summe of his loue to a great friend of his called Argastus, a towns-man and our neighbour, praying him earnestly to request his sonne Arsileus (as a thing that he stood greatly in neede of) to pen him a letter, and to tell him, that it was to be sent a good wale thence to a bonnie Shepherdesse, whom he loued and serued. And so he gaue him instructions of other things, making most for his purpose, that he was to request him to put in the letter. Argastus was so carefull about his friends busines, that Arsileus (vrged thereunto by his incessant requests) deliuered him the letter in as ample sort as he requested it. Which Arsenius seeing so fit for his purpose, wrought the meanes, that it came to my hands: the which receiuing much against my will, I founde that it saide thus.

FAire Shepherdesse whose hap and fare,
That such it be, it is Gods will:
Let not such grace and beautie rare
Decay, or be imployed ill.

And whose milde lambes and marked sheepe
Thou maist behold (with merrie cheere)
By flockes increase, where they doe keepe
On tops of these greene hillocks heere.