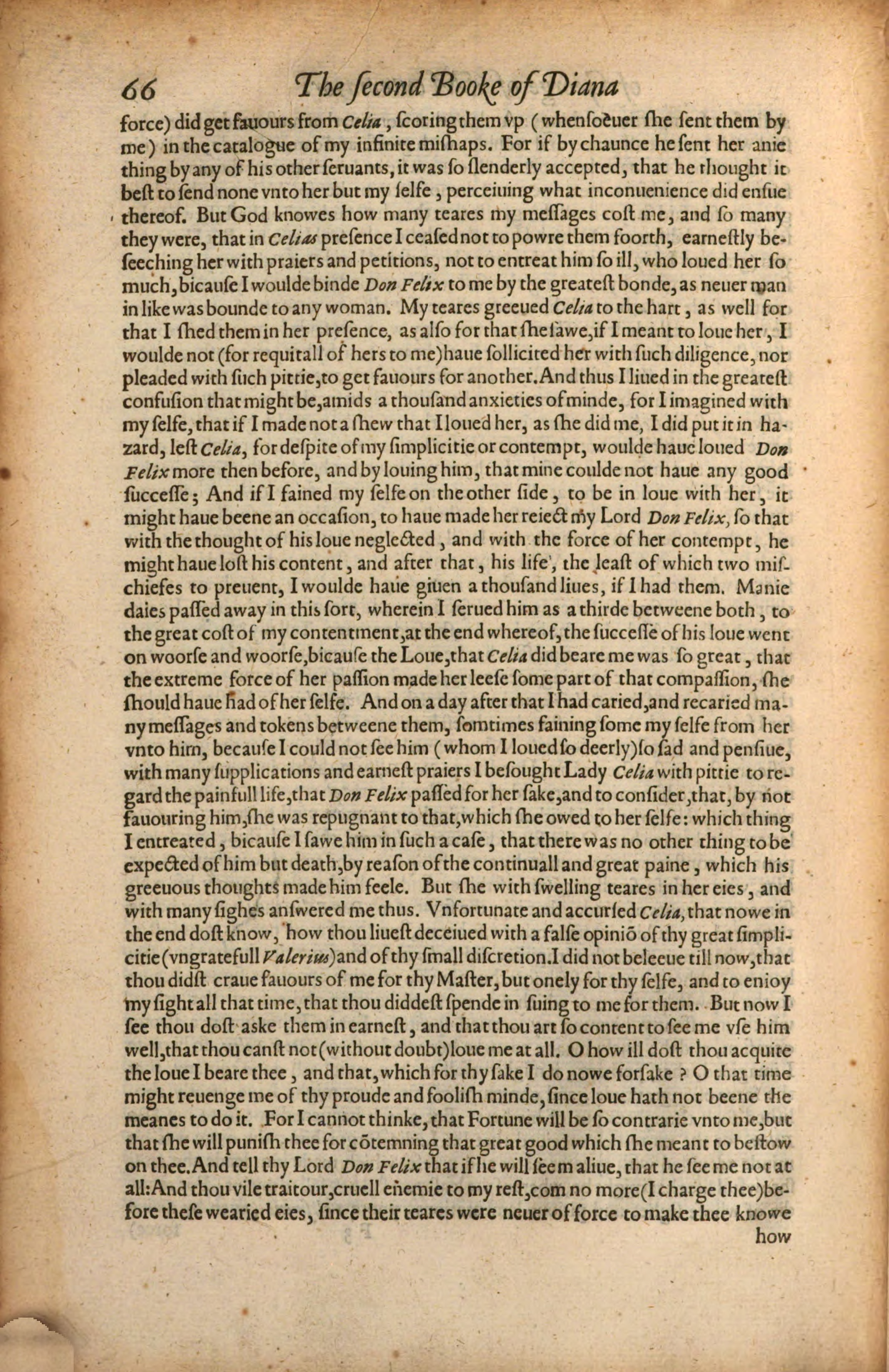 force) did get fauours from Celia, scoring them vp (whensoeuer she sent them by me) in the catalogue of my infinite mishaps. For if by chaunce he sent her anie thing by any of his other seruants, it was so slenderly accepted, that he thought it best to send none vnto her but my selfe, perceiuing what inconuenience did ensue thereof. But God knowes how many teares my messages cost me, and so many they were, that in Celias presence I ceased not to powre them foorth, earnestly beâˆ£seeching her with praiers and petitions, not to entreat him so ill, who loued her so much, bicause I woulde binde Don Felix to me by the greatest bonde, as neuer man in like was bounde to any woman. My teares greeued Celia to the hart, as well for that I shed them in her presence, as also for that she sawe, if I meant to loue her, I woulde not (for requitall of hers to me) haue sollicited her with such diligence, nor pleaded with such pittie, to get fauours for another. And thus I liued in the greatest confusion that might be, amids a thousand anxieties of minde, for I imagined with my selfe, that if I made not a shew that I loued her, as she did me, I did put it in haâˆ£zard, lest Celia, for despite of my simplicitie or contempt, woulde haue loue Don Felix more then before, and by louing him, that mine coulde not haue any good successe; And if I fained my selfe on the other side, to be in loue with her, it might haue beene an occasion, to haue made her reiect my Lord Don Felix, so that with the thought of his loue neglected, and with the force of her contempt, he might haue lost his content, and after that, his life, the least of which two misâˆ£chiefes to preuent, I woulde haue giuen a thousand liues, if I had them. Manie daies passed away in this sort, wherein I serued him as a thirde betweene both, to the great cost of my contentment, at the end whereof, the successe of his loue went on woorse and woorse, bicause the Loue, that Celia did beare me was so great, that the extreme force of her passion made her leese some part of that compassion, she should haue had of her selfe. And on a day after that I had caried, and recaried maâˆ£ny messages and tokens betweene them, somtimes faining some my selfe from her vnto him, because I could not see him (whom I loued so deerly) so sad and pensiue, with many supplications and earnest praiers I besought Lady Celia with pittie to reâˆ£gard the painfull life, that Don Felix passed for her sake, and to consider, that, by not fauouring him, she was repugnant to that, which she owed to her selfe: which thing I entreated, bicause I sawe him in such a case, that there was no other thing to be expected of him but death, by reason of the continuall and great paine, which his greeuous thoughts made him feele. But she with swelling teares in her eies, and with many sighes answered me thus. Vnfortunate and accursed Celia, that nowe in the end dost know, how thou liuest deceiued with a false opinioÌ„ of thy great simpliâˆ£citie (vngratefull Valerius) and of thy small discretion. I did not beleeue till now, that thou didst craue fauours of me for thy Master, but onely for thy selfe, and to enioy my sight all that time, that thou diddest spende in suing to me for them. But now I see thou dost aske them in earnest, and that thou art so content to see me vse him well, that thou canst not (without doubt) loue me at all. O how ill dost thou acquite the loue I beare thee, and that, which for thy sake I do nowe forsake? O that time might reuenge me of thy proude and foolish minde, since loue hath not beene the meanes to do it. For I cannot thinke, that Fortune will be so contrarie vnto me, but that she will punish thee for coÌ„temning that great good which she meant to bestow on thee. And tell thy Lord Don Felix that if he will see me aliue, that he see me not at all: And thou vile traitour, cruell enemie to my rest, com no more (I charge thee) beâˆ£fore these wearied eies, since their teares were neuer of force to make thee knowe