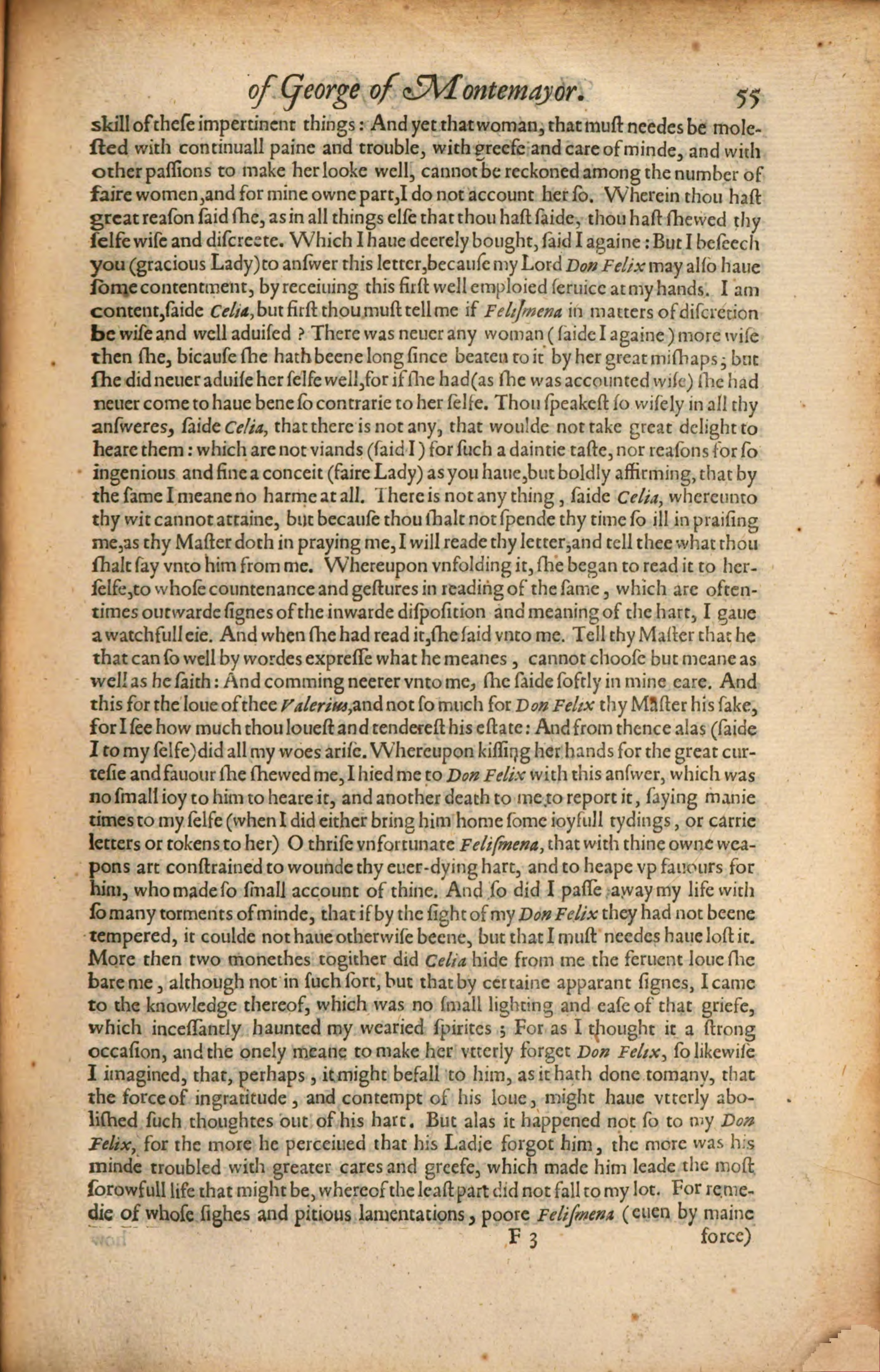 skill of these impertinent things: And yet that woman, that must needes be moleâˆ£sted with continuall paine and trouble, with greefe and care of minde, and with other passions to make her looke well, cannot be recknoed among the number of faire women, and for mine owne part, I do not account her so. Wherein thou hast great reason said she, as in all things else that thou hast saide, thou hast shewed thy selfe wise and discreete. Which I haue deerely bought, said I againe: But I beseech you (gracious Lady) to answer this letter, because my Lord Don Felix may also haue some contentment, by receiuing this first well emploied seruice at my hands. I am content, saide Celia, but first thou must tell me if Felismena in matters of discretion be wise and well aduised? There was neuer any woman (saide I againe) more wise then she, bicause she hath beene long since beaten to it by her great mishaps; but she did neuer aduise her selfe well, for if she had (as she was accounted wise) she had neuer come to haue bene so contrarie to her selfe. Thou speakest so wisely in all thy answeres, saide Celia, that there is not any, that woulde not take great delight to heare them: which are not viands (said I) for such a daintie taste, nor reasons for so ingenious and fine a conceit (faire Lady) as you haue, but boldly affirming, that by the same I meane no harme at all. There is not any thing, saide Celia, whereunto thy wit cannot attaine, but because thou shalt not spende thy time so ill in praising me, as thy Master doth in praying me, I will reade thy letter, and tell thee what thou shalt say vnto him from me. Whereupon vnfolding it, she began to read it to herâˆ£self, to whose countenance and gestures in reading of the same, which are oftenâˆ£times outwarde signes of the inwarde disposition and meaning of the hart, I gaue a watchfull eie. And when she had read it, she said vnto me. Tell thy Master that he that can so well by wordes expresse what he meanes, cannot choose but meane as well as he saith: And comming neerer vnto me, she saide softly in mine eare. And this for the loue of thee
Valerius, and not so much for Don Felix thy Master his sake, for I see how much thou louest and tenderest his estate: And from thence alas (saide I to my selfe) did all my woes arise. Whereupon kissing her hands for the great curâˆ£tesie and fauour she shewed me, I hied me to Don Felix with this answer, which was no small ioy to him to heare it, and another death to me to report it, saying manie times to my selfe (when I did either bring him home some ioyfull tydings, or carrie letters or tokens to her) O thrise vnfortunate Felismena, that with thine owne weaâˆ£pons art constrained to wounde thy euer-dying hart, and to heape vp fauours for him, who made so small account of thine. And so did I passe away my life with so many torments of minde, that if by the sight of my Don Felix they had not beene tempered, it coulde not haue otherwise beene, but that I must needes haue lost it. More then two monethes togither did Celia hide from me the feruent loue she bare me, although not in such sort, but that by certaine apparant signes, I came to the knowledge thereof, which was no small lighting and ease of that griefe, which incessantly haunted my wearied spirites; For as I thought it a strong occasion, and the onely meane to make her vtterly forget Don Felix, so likewise I imagined, that, perhaps, it might befall to him, as it hath done to many, that the force of ingratitude, and contempt of his loue, might haue vtterly aboâˆ£lished such thoughtes out of his hart. But alas it happened not so to my Don Felix, for the more he perceiued that his Ladie forgot him, the more was his minde troubled with greater cares and greefe, which made him leade the most sorowfull life that might be, whereof the least part did not fall to my let. For remeâˆ£die of whose sighes and pitious lamentations, poore Felismena (euen by maine