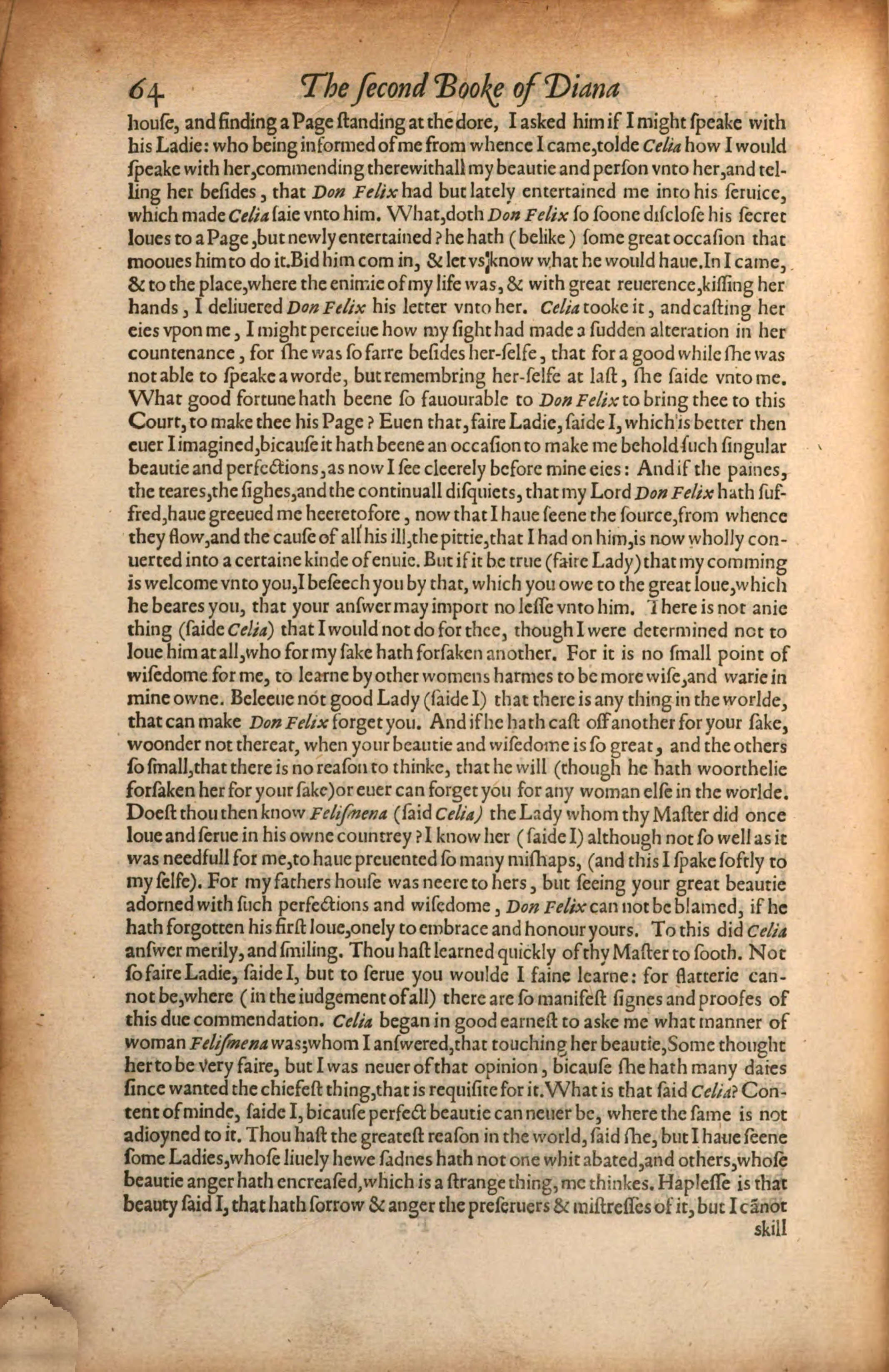 house, and finding a Page standing at the dore, I asked him if I might speake with his Ladie: who being informed of me from whence I came, tolde Celia how I would speake with her, commending therewithall my beautie and person vnto her, and telâˆ£ling her besides, that Don Felix had but lately entertained me into his seruice, which made Celia saie vnto him. What, doth Don Felix so soone disclose his secret loues to a Page, but newly entertained? he hath (belike) some great occasion that mooues him to do it. Bid him com in, & let vs know what he would haue. In I came, & to the place, where the enimie of my life was, & with great reuerence, kissing her hands, I deliuered Don Felix his letter vnto her. Celia tooke it, and casting her eies vpon me, I might perceiue how my sight had made a sudden alteration in her countenance, for she was so farre besides her-selfe, that for a good while she was not able to speake a worde, but remembring her-selfe at last, she saide vnto me. What good fortune hath beene so fauourable to Don Felix to bring thee to this Court, to make thee his Page? Euen that, faire Ladie, saide I, which is better then euer I imagined, bicause it hath beene an occasion to make me behold such singular beautie and perfections, as now I see cleerely before mine eies: And if the paines, the teares, the sighes, and the continuall disquiets, that my Lord Don Felix hath sufâˆ£fred, haue greeued me heeretofore, now that I haue seene the source, from whence they flow, and the cause of all his ill, the pittie, that I had on him, is now wholly conâˆ£uerted into a certaine kinde of enuie. But if it be true (faire Lady) that my comming is welcome vnto you, I beseech you by that, which you owe to the great loue, which he beares you, that your answer may import no lesse vnto him. There is not anie thing (saide Celia) that I would not do for thee, though I were determined not to loue him at all, who for my sake hath forsaken another. For it is no small point of wisedome for me, to learne by other womens harmes to be more wise, and warie in mine owne. Beleeue not good Lady (saide I) that there is any thing in the worlde, that can make Don Felix forget you. And if he hath cast off another for your sake, woonder not thereat, when your beautie and wisedome is so great, and the others so small, that there is no reason to thinke, that he will (though he hath woorthelie forsaken her for your sake) or euer can forget you for any woman else in the worlde. Doest thou then know Felismena (saide Celia) the Lady whom thy Master did once loue and serue in his owne countrey? I know her (saide I) although not so well as it was needfull for me, to haue preuented so many mishaps, (and this I spake softly to my selfe). For my fathers house was neere to hers, but seeing your great beautie adorned with such perfections and wisedome, Don Felix can not be blamed, if he hath forgotten his first loue, onely to embrace and honour yours. To this did Celia answer merily, and smiling. Thou hast learned quickly of thy Master to sooth. Not so faire Ladie, saide I, but to serue you woulde I faine learne: for flatterie canâˆ£not be where (in the iudgement of all) there are so manifest signes and proofes of this due commendation. Celia began in good earnest to aske me what manner of woman Felismena was; whom I answered, that touching her beautie, Some thought her to be very faire, but I was neuer of that opinion, bicause she hath many daies since wanted the chiefest thing, that is requisite for it. What is that said Celia? Conâˆ£tent of minde, saide I, bicause perfect beautie can neuer be, where the same is not adioyned to it. Thou hast the greatest reason in the world, said she, but I haue seene some Ladies, whose liuely hewe sadnes hath not one whit abated, and others, whose beautie anger hath encreased, which is a strange thing, me thinkes. Haplesse is that beauty said I, that hath sorrow & anger the preseruers & mistresses of it, but I caÌ„not