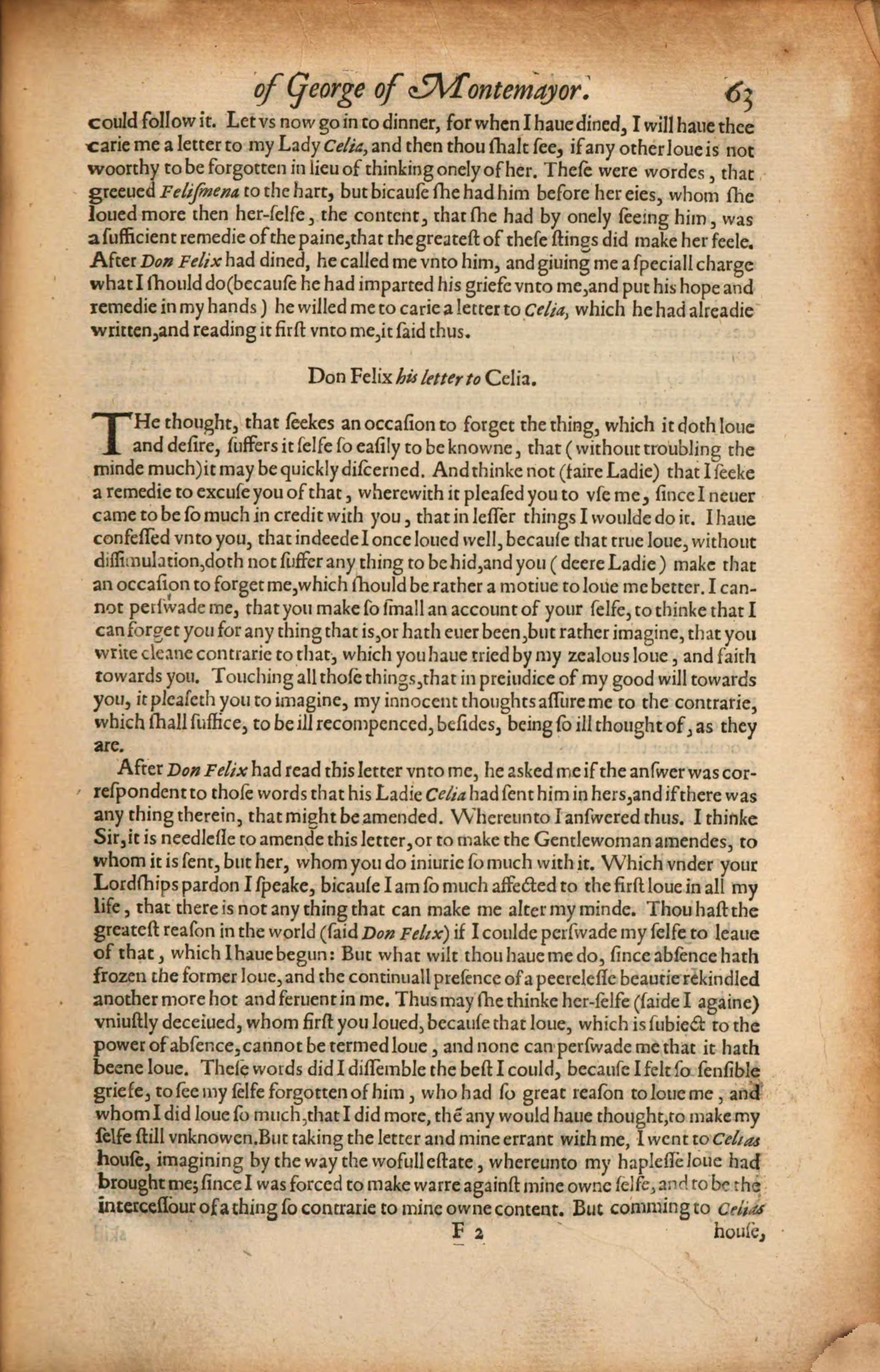 could follow it. Let vs now go in to dinner, for when I haue dined, I will haue thee carie me a letter to my Lady Celia, and then thou shalt see, if any other loue is not woorthy to be forgotten in lieu of thinking onely of her. These were wordes, that greeued Felismena to the hart, but bicause she had him before her eies, whom she loued more then her-selfe, the content, that she had by onely seeing him, was a sufficient remedie of the paine, that the greatest of these stings did make her feele. After Don Felix had dined, he called me vnto him, and giuing me a speciall charge what I should do (because he had imparted his griefe vnto me, and put his hope and remedie in my hands) he willed me to carie a letter to Celia, which he had alreadie written, and reading it first vnto me, it said thus.

Don Felix his letter to Celia.

THe thought, that seekes an occasion to forget the thing, which it doth loue and desire, suffers it selfe so easily to be knowne, that (without troubling the minde much) it may be quickly discerned. And thinke not (faire Ladie) that I seeke a remedie to excuse you of that, wherewith it pleased you to vse me, since I neuer came to be so much in credit with you, that in lesser things I woulde do it. I haue confessed vnto you, that indeede I once loued well, because that true loue, without dissimulation, doth not suffer any thing to be hid, and you (deere Ladie) make that an occasion to forget me, which should be rather a motiue to loue me better. I canâˆ£not perswade me, that you make so small an account of your selfe, to thinke that I can forget you for any thing that is, or hath euer been, but rather imagine, that you write cleane contrarie to that, which you haue tried by my zealous loue, and faith towards you. Touching all those things, that in preiudice of my good will towards you, it pleaseth you to imagine, my innocent thoughts assure me to the contrarie, which shall suffice, to be ill recompenced, besides, being so ill thought of, as they are.
After Don Felix had read this letter vnto me, he asked me if the answer was corâˆ£respondent to those words that his Ladie Celia had sent him in hers, and if there was any thing therein, that might be amended. Whereunto I answered thus. I thinke Sir, it is needlesse to amende this letter, or to make the Gentlewoman amendes, to whom it is sent, but her, whom you do iniurie so much with it. Which vnder your Lordships pardon I speake, bicause I am so much affected to the first loue in all my life, that there is not any thing that can make me alter my minde. Thou hast the greatest reason in the world (said Don Felix) if I coulde perswade my selfe to leaue of that, which I haue begun: But what wilt thou haue me do, since absence hath frozen the former loue, and the continuall presence of a peerelesse beautie rekindled another more hot and feruent in me. Thus may she thinke her-selfe (saide I againe) vniustly deceiued, whom first you loued, because that loue, which is subiect to the power of absence, cannot be termed loue, and none can perswade me that it hath beene loue. These words did I dissemble the best I could, because I felt so sensible griefe, to see my selfe forgotten of him, who had so great reason to loue me, and whom I did loue so much, that I did more, theÌ„ any would haue thought, to make my selfe still vnknowen. But taking the letter and mine errant with me, I went to Celias house, imagining by the way the wofull estate, whereunto my haplesse loue had brought me; since I was forced to make warre against mine owne selfe, and to be the intercessour of a thing so contrarie to mine owne content. But comming to Celias