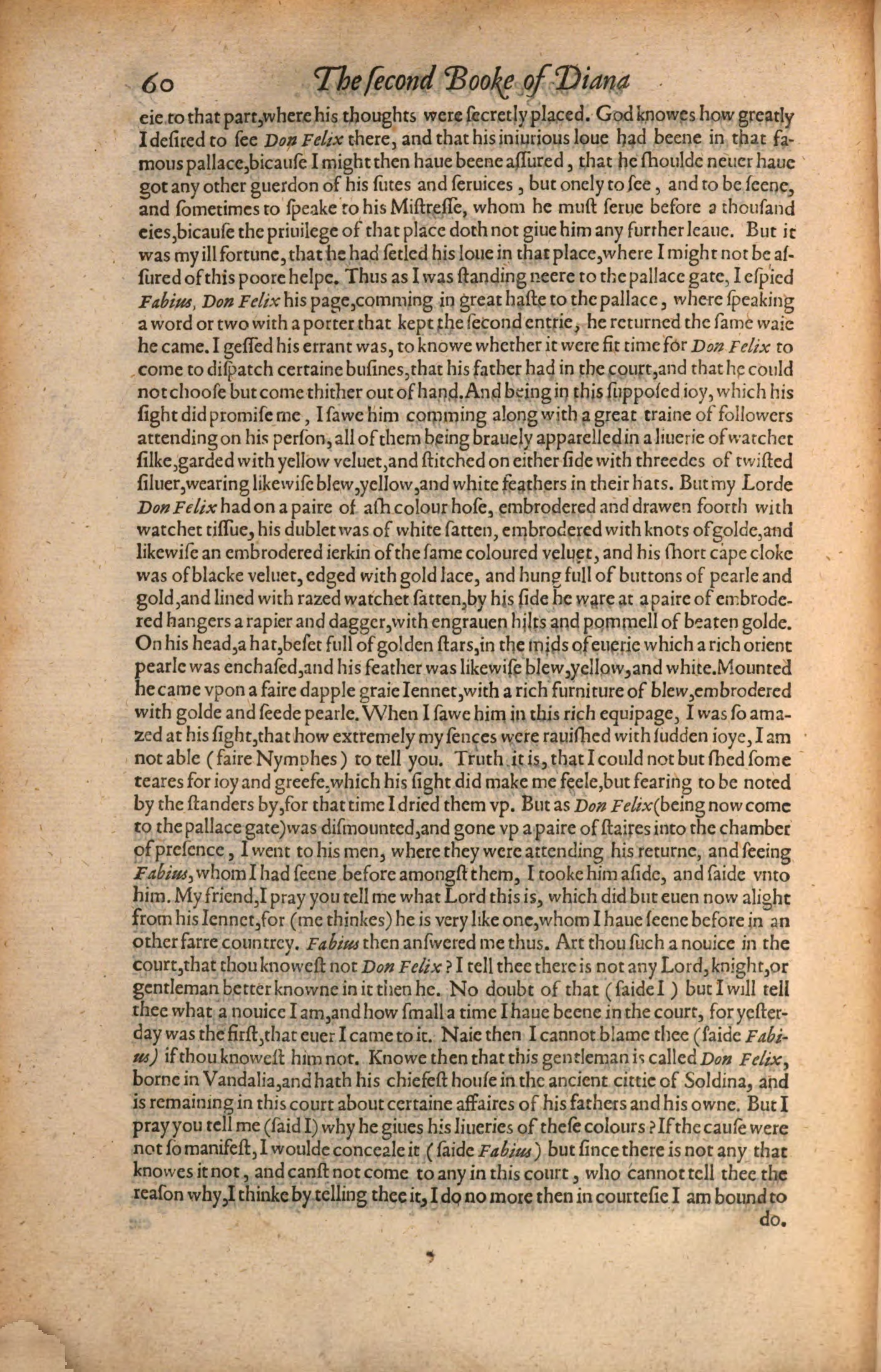 eie to that part, where his thoughts were secretly placed. God knowes how greatly I desired to see Don Felix there, and that his iniurious loue had beene in that faâˆ£mous pallace, bicause I might then haue beene assured, that he shoulde neuer haue got any other guerdon of his sutes and seruices, but onely to see, and to be seene, and sometimes to speake to his Mistresse, whom he must serue before a thousand eies, bicause the priuilege of that place doth not giue him any further leaue. But it was my ill fortune, that he had setled his loue in that place, where I might not be asâˆ£sured of this poore helpe. Thus as I was standing neere to the pallace gate, I espied Fabius, Don Felix his page, comming in great haste to the pallace, where speaking a word or two with a porter that kept the second entrie, he returned the same waie he came. I gessed his errant was, to knowe whether it were fit time for Don Felix to come to dispatch certaine busines, that his father had in the court, and that he could not choose but come thither out of hand. And being in this supposed ioy, which his sight did promise me, I sawe him comming along with a great traine of followers attending on his person, all of them being brauely apparelled in a liuerie of watchet silke, garded with yellow veluet, and stitched on either side with threedes of twisted siluer, wearing likewise blew, yellow, and white feathers in their hats. But my Lorde Don Felixhad on a paire of ash colour hose, embrodered and drawen foorth with watchet tissue, his dublet was of white satten, embrodered with knots of golde, and likewise an embrodered ierkin of the same coloured veluet, and his short cape cloke was of blacke veluet, edged with gold lace, and hung full of buttons of pearle and gold, and lined with razed watchet satten, by his side he ware at apaire of embrodeâˆ£red hangers a rapier and dagger, with engrauen hilts and pommell of beaten golde. On his head, a hat, beset full of golden stars, in the mids of euerie which a rich orient pearle was enchased, and his feather was likewise blew, yellow, and white. Mounted he came vpon a faire dapple graie Iennet, with a rich furniture of blew, embrodered with golde and seede pearle. When I sawe him in this rich equipage, I was so amaâˆ£zed at his sight, that how extremely my sences were rauished with sudden ioye, I am not able (faire Nymphes) to tell you. Truth it is, that I could not but shed some teares for ioy and greefe, which his sight did make me feele, but fearing to be noted by the standers by, for that time I dried them vp. But as Don Felix (being now come to the pallace gate) was dismounted, and gone vp a paire of staires into the chamber of presence, I went to his men, where they were attending his returne, and seeing Fabjus, whom I had seene before amongst them, I tooke him aside, and saide vnto him. My friend, I pray you tell me what Lord this is, which did but euen now alight from his Iennet, for (me thinkes) he is very like one, whom I haue seene before in an other farre countrey. Fabius then answered me thus. Art thou such a nouice in the court, that thou knowest not Don Felix? I tell thee there is not any Lord, knight, or gentleman better knowne in it then he. No doubt of that (saide I) but I will tell thee what a nouice I am, and how small a time I haue beene in the court, for yesterâˆ£day was the first, that euer I came to it. Naie then I cannot blame thee (saide Fabiâˆ£us) if thou knowest him not. Knowe then that this gentleman is called Don Felix, borne in Vandalia, and hath his chiefest house in the ancient cittie of Soldina, and is remaining in this court about certaine affaires of his fathers and his owne. But I pray you tell me (said I) why he giues his liueries of these colours? If the cause were not so manifest, I woulde conceale it (saide Fabius) but since there is not any that knowes it not, and canst not come to any in this court, who cannot tell thee the reason why, I thinke by telling thee it, I do no more then in courtesie I am bound to