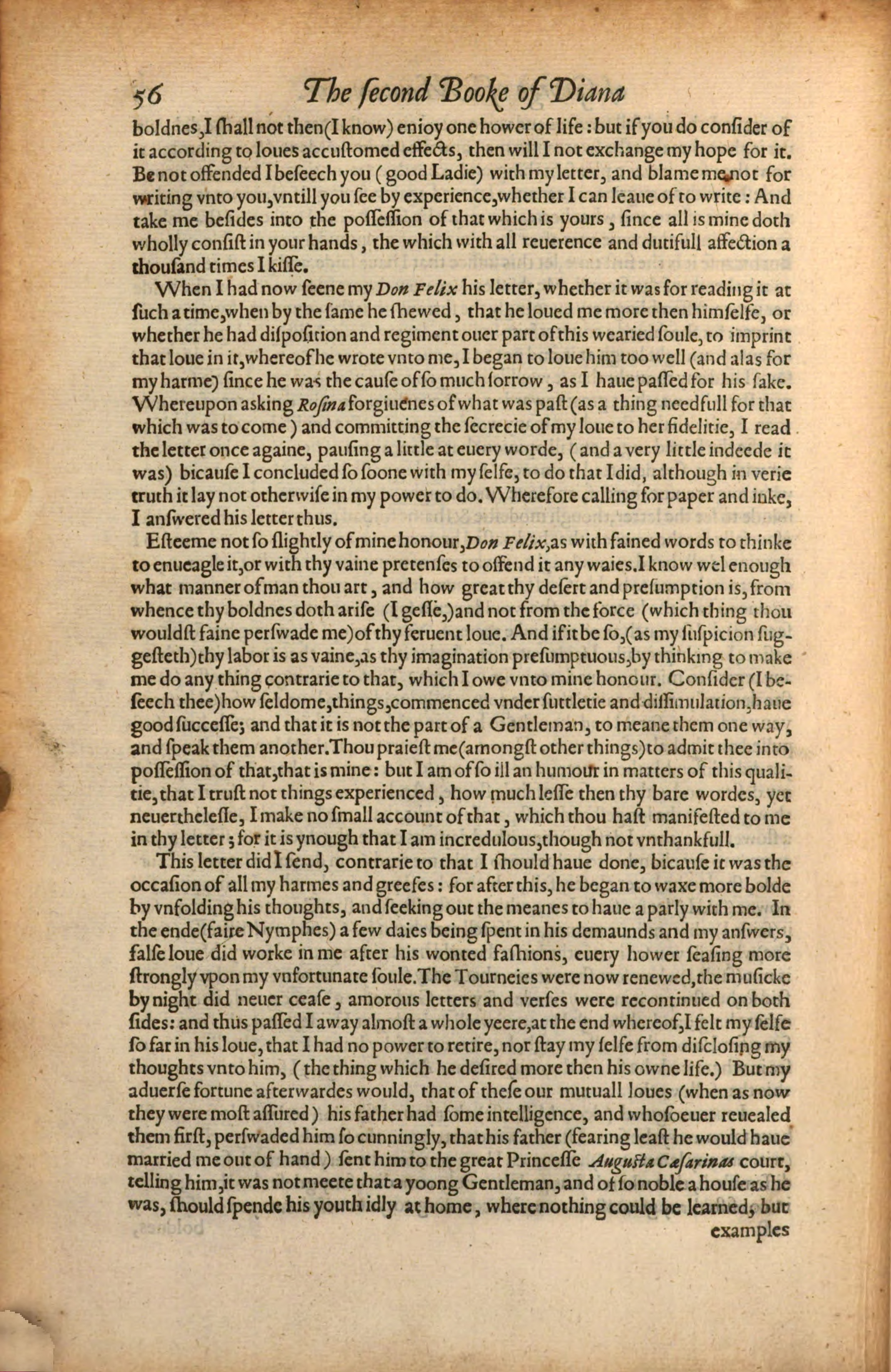 boldnes, I shall not then (I know) enioy one hower of life: but if you do consider of it according to loues accustomed effects, then will I not exchange my hope for it. Be not offended I beseech you (good Ladie) with my letter, and blame me not for writing vnto you, vntill you see by experience, whether I can leaue of to write: And take me besides into the possession of that which is yours, since all is mine doth wholly consist in your hands, the which with all reuerence and dutifull affection a thousand times I kisse.
When I had now seene my Don Felix his letter, whether it was for reading it at such a time, when by the same he shewed, that he loued me more then himselfe, or whether he had disposition and regiment ouer part of this wearied soule, to imprint that loue in it, whereof he wrote vnto me, I began to loue him too well (and alas for my harme) since he was the cause of so much sorrow, as I haue passed for his sake. Whereupon asking Rosina forgiuenes of what was past (as a thing needfull for that which was to come) and committing the secrecie of my loue to her fidelitie, I read the letter once againe, pausing a little at euery worde, (and a very little indeede it was) bicause I concluded so soone with my selfe, to do that I did, although in verie truth it lay not otherwise in my power to do. Wherefore calling for paper and inke, I answered his letter thus.
Esteeme not so slightly of mine honour, Don Felix, as with fained words to thinke to enueagle it, or with thy vaine pretenses to offend it any waies. I know wel enough what manner of man thou art, and how great thy desert and presumption is, from whence thy boldnes doth arise (I gesse,) and not from the force (which thing thou wouldst faine perswade me) of thy feruent loue. And if it be so, (as my suspicion sugâˆ£gesteth) thy labor is as vaine, as thy imagination presumptuous, by thinking to make me do any thing contrarie to that, which I owe vnto mine honour. Consider (I beâˆ£seech thee) how seldome, things, commenced vnder suttletie and dissimulation, haue good successe; and that it is not the part of a Gentleman, to meane them one way, and speak them another. Thou praiest me (amongst other things) to admit thee into possession of that, that is mine: but I am of so ill an humour in matters of this qualiâˆ£tie, that I trust not things experienced, how much lesse then thy bare wordes, yet neuerthelesse, I make no small account of that, which thou hast manifested to me in thy letter; for it is ynough that I am incredulous, though not vnthankfull.
This letter did I send, contrarie to that I should haue done, bicause it was the occasion of all my harmes and greefes: for after this, he began to waxe more bolde by vnfolding his thoughts, and seeking out the meanes to haue a parly with me. In the ende (faire Nymphes) a few daies being spent in his demaunds and my answers, false loue did worke in me after his wonted fashions, euery hower seasing more strongly vpon my vnfortunate soule. The Tourneies were now renewed, the musicke by night did neuer cease, amorous letters and verses were recontinued on both sides: and thus passed I away almost a whole yeere, at the end whereof, I felt my selfe so far in his loue, that I had no power to retire, nor stay my selfe from disclosing my thoughts vnto him, (the thing which he desired more then his owne life.) But my aduerse fortune afterwardes would, that of these our mutuall loues (when as now they were most assured) his father had some intelligence, and whosoeuer reuealed them first, perswaded him so cunningly, that his father (fearing least he would haue married me out of hand) sent him to the great Princesse Augusta Caesarinas court, telling him, it was not meete that a yoong Gentleman, and of so noble a house as he was, should spende his youth idly at home, where nothing could be learned, but