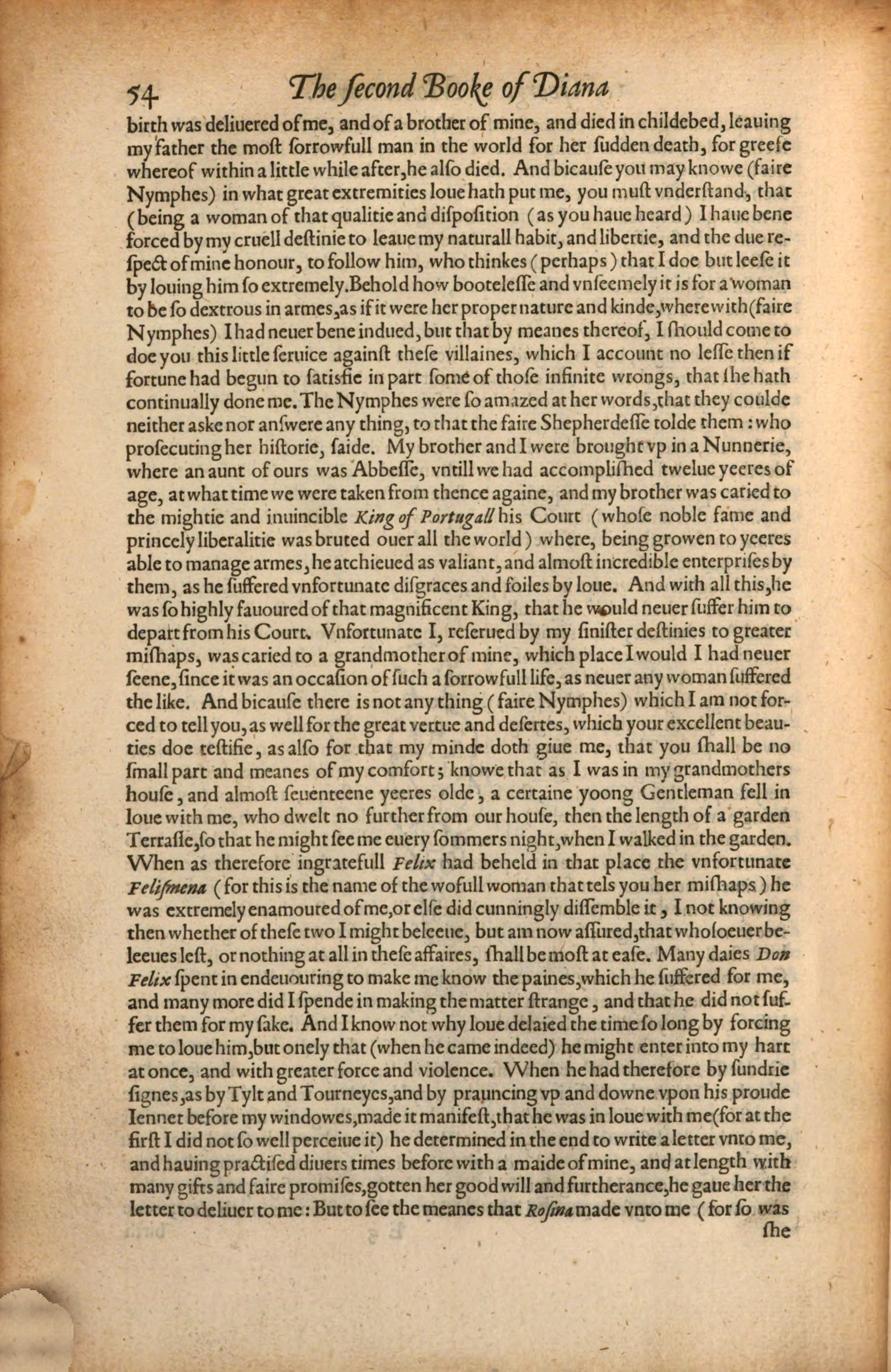 birth was deliuered of me, and of a brother of mine, and died in childebed, leauing my father the most sorrowfull man in the world for her sudden death, for greefe whereof within a little while after, he also died. And bicause you may knowe (faire Nymphes) in what great extremities loue hath put me, you must vnderstand, that (being a woman of that qualitie and disposition (as you haue heard) I haue bene forced by my cruell destinie to leaue my naturall habit, and libertie, and the due reâˆ£spect of mine honour, to follow him, who thinkes (perhaps) that I doe but leese it by louing him so extremely. Behold how bootelesse and vnseemely it is for a woman to be so dextrous in armes, as if it were her proper nature and kinde, wherewith (faire Nymphes) I had neuer bene indued, but that by meanes thereof, I should come to doe you this little seruice against these villaines, which I account no lesse then if fortune had begun to satisfie in part some of those infinite wrongs, that she hath continually done me. The Nymphes were so amazed at her words, that they coulde neither aske nor answere any thing, to that the faire Shepherdesse tolde them: who prosecuting her historie, saide. My brother and I were brought vp in a Nunnerie, where an aunt of ours was Abbesse, vntill we had accomplished twelue yeeres of age, at what time we were taken from thence againe, and my brother was caried to the mightie and inuincible King of Portugall his Court (whose noble fame and princely liberalitie was bruted ouer all the world) where, being growen to yeeres able to manage armes, he atchieued as valiant, and almost incredible enterprises by them, as he suffered vnfortunate disgraces and foiles by loue. And with all this, he was so highly fauoured of that magnificent King, that he would neuer suffer him to depart from his Court. Vnfortunate I, reserued by my sinister destinies to greater mishaps, was caried to a grandmother of mine, which place I would I had neuer seene, since it was an occasion of such a sorrowfull life, as neuer any woman suffered the like. And bicause there is not any thing (faire Nymphes) which I am not forâˆ£ced to tell you, as well for the great vertue and desertes, which your excellent beauâˆ£ties doe testifie, as also for that my minde doth giue me, that you shall be no small part and meanes of my comfort; knowe that as I was in my grandmothers house, and almost seuenteene yeeres olde, a certaine yoong Gentleman fell in loue with me, who dwelt no further from our house, then the length of a garden Terrasse, so that he might see me euery sommers night, when I walked in the garden. When as therefore ingratefull Felix had beheld in that place the vnfortunate
Felismena (for this is the name of the wofull woman that tels you her mishaps) he was extremely enamoured of me, or else did cunningly dissemble it, I not knowing then whether of these two I might beleeue, but am now assured, that whosoeuer beâˆ£leeues lest, or nothing at all in these affaires, shall be most at ease. Many daies Don Felix spent in endeuouring to make me know the paines, which he suffered for me, and many more did I spende in making the matter strange, and that he did not sufâˆ£fer them for my sake. And I know not why loue delaied the time so long by forcing me to loue him, but onely that (when he came indeed) he might enter into my hart at once, and with greater force and violence. When he had therefore by sundrie signes, as by Tylt and Tourneyes, and by prauncing vp and downe vpon his proude Iennet before my windowes, made it manifest, that he was in loue with me (for at the first I did not so well perceiue it) he determined in the end to write a letter vnto me, and hauing practised diuers times before with a maide of mine, and at length with many gifts and faire promises, gotten her good will and furtherance, he gaue her the letter to deliuer to me: But to see the meanes that Rosina made vnto me (for so was