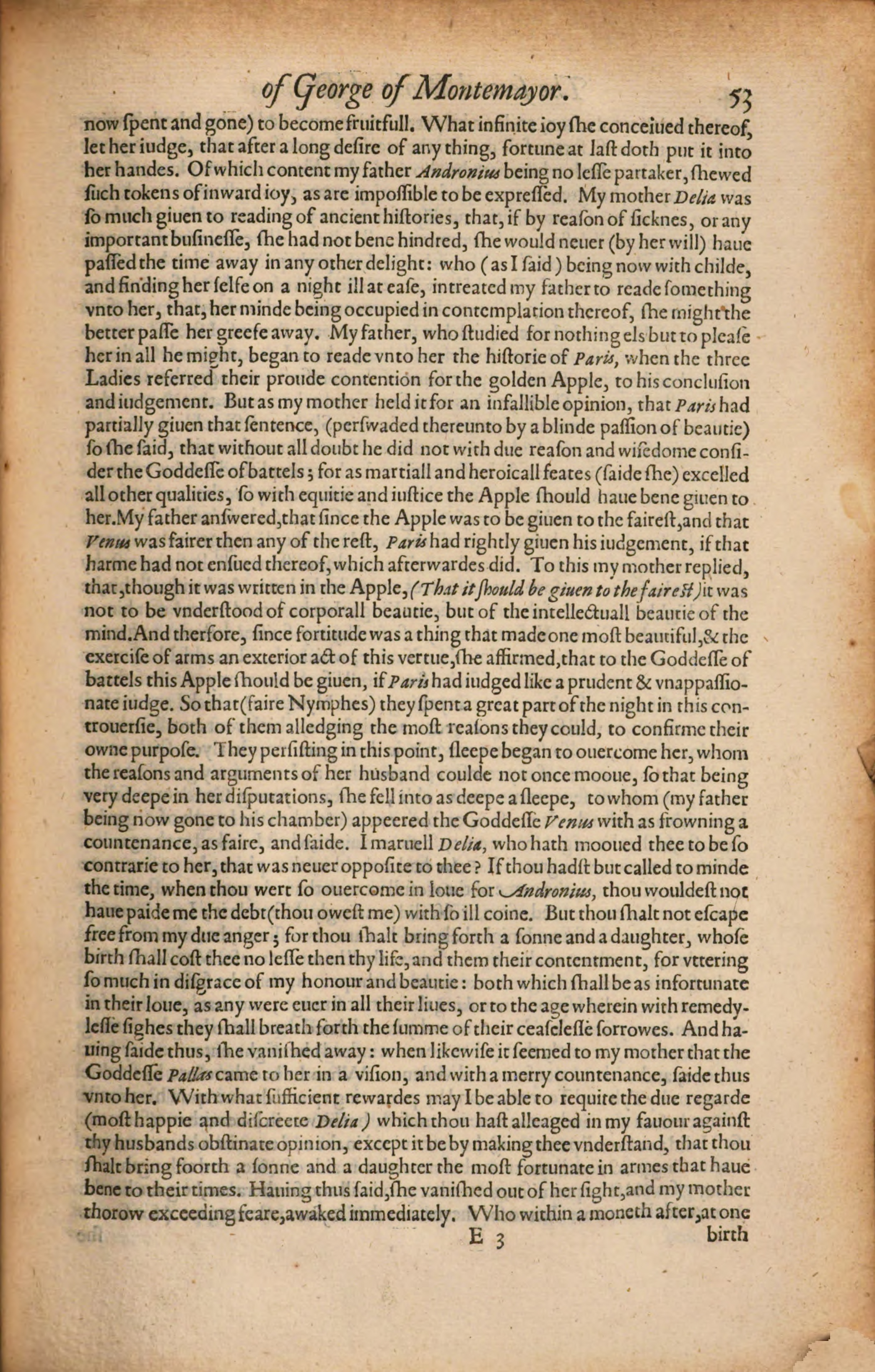 now spent and gone) to become fruitfull. What infinite ioy she conceiued thereof, let her iudge, that after a long desire of any thing, fortune at last doth put it into her handes. Of which content my father Andronius being no lesse partaker, shewed such tokens of inward ioy, as are impossible to be expressed. My mother Delia was so much giuen to reading of ancient histories, that, if by reason of sicknes, or any important businesse, she had not bene hindred, she would neuer (by her will) haue passed the time away in any other delight: who (as I said) being now with childe, and finding her selfe on a night ill at ease, intreated my father to reade something vnto her, that, her minde being occupied in contemplation thereof, she might the better passe her greefe away. My father, who studied for nothing els but to please her in all he might, began to reade vnto her the historie of Paris, when the three Ladies referred their proude contention for the golden Apple, to his conclusion and iudgement. But as my mother held it for an infallible opinion, that Paris had partially giuen that sentence, (perswaded thereunto by a blinde passion of beautie) so she said, that without all doubt he did not with due reason and wisedome consiâˆ£der the Goddesse of battels; for as martiall and heroicall feates (saide she) excelled all other qualities, so with equitie and iustice the Apple should haue bene giuen to her. My father answered, that since the Apple was to be giuen to the fairest, and that Venus was fairer then any of the rest, Paris had rightly giuen his iudgement, if that harme had not ensued thereof, which afterwardes did. To this my mother replied, that, though it was written in the Apple, (That it should be giuen to the fairest) it was not to be vnderstood of corporall beautie, but of the intellectuall beautie of the mind. And therfore, since fortitude was a thing that made one most beautiful, & the exercise of arms an exterior act of this vertue, she affirmed, that to the Goddesse of battels this Apple should be giuen, if Paris had iudged like a prudent & vnappassioâˆ£nate iudge. So that (faire Nymphes) they spent a great part of the night in this conâˆ£trouersie, both of them alledging the most reasons they could, to confirme their owne purpose. They persisting in this point, sleepe began to ouercome her, whom the reasons and arguments of her husband coulde not once mooue, so that being very deepe in her disputations, she fell into as deepe a sleepe, to whom (my father being now gone to his chamber) appeered the Goddesse Venus with as frowning a countenance, as faire, and saide. I maruell Delia, who hath mooued thee to be so contrarie to her, that was neuer opposite to thee? If thou hadst but called to minde the time, when thou wert so ouercome in loue for Andronius, thou wouldest not haue paide me the debt (thou owest me) with so ill coine. But thou shalt not escape free from my due anger; for thou shalt bring forth a sonne and a daughter, whose birth shall cost thee no lesse then thy life, and them their contentment, for vttering so much in disgrace of my honour and beautie: both which shall be as infortunate in their loue, as any were euer in all their liues, or to the age wherein with remedyâˆ£lesse sighes they shall breath forth the summe of their ceaselesse sorrowes. And haâˆ£uing saide thus, she vanished away: when likewise it seemed to my mother that the Goddesse Pallas came to her in a vision, and with a merry countenance, saide thus vnto her. With what sufficient rewardes may I be able to require the due regarde (most happie and discreete Delia) which thou hast alleaged in my fauour against thy husbands obstinate opinion, except it be by making thee vnderstand, that thou shalt bring foorth a sonne and a daughter the most fortunate in armes that haue bene to their times. Hauing thus said, she vanished out of her sight, and my mother thorow exceeding seare, awaked immediately. Who within a moneth after, at one