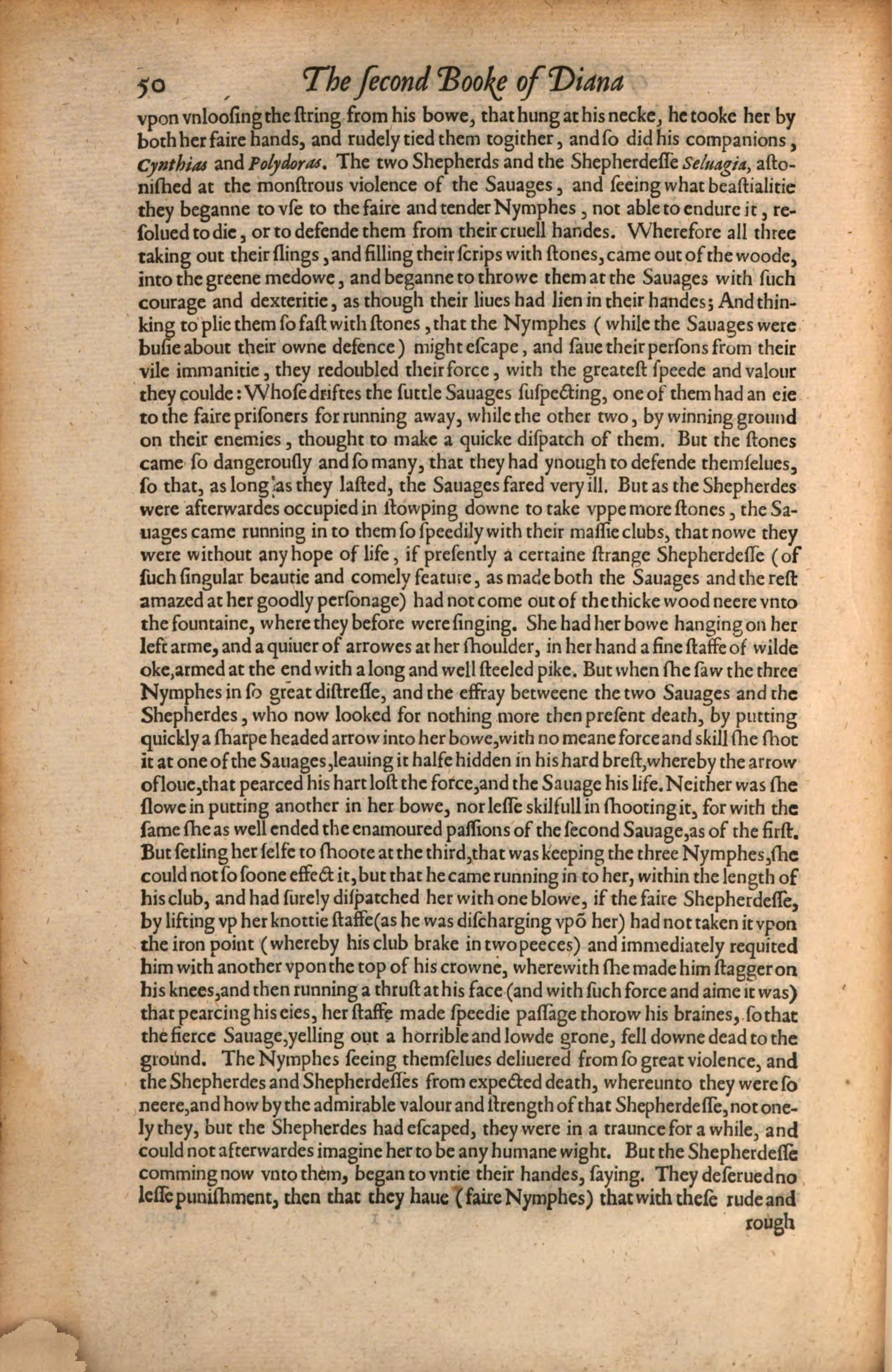 vpon vnloosing the string from his bowe, that hung at his necke, he tooke her by both her faire hands, and rudely tied them togither, and so did his companions, Cynthias and Polydoras. The two Shepherds and the Shepherdesse Seluagia, astoâˆ£nished at the monstrous violence of the Sauages, and seeing what beastialitie they beganne to vse to the faire and tender Nymphes, not able to endure it, reâˆ£solued to die, or to defende them from their cruell handes. Wherefore all three taking out their slings, and filling their scrips with stones, came out of the woode, into the greene medowe, and beganne to throwe them at the Sauages with such courage and dexteritie, as though their liues had lien in their handes; And thinâˆ£king to plie them so fast with stones, that the Nymphes (while the Sauages were busie about their owne defence) might escape, and saue their persons from their vile immanitie, they redoubled their force, with the greatest speede and valour they coulde: Whose driftes the suttle Sauages suspecting, one of them had an eie to the faire prisoners for running away, while the other two, by winning ground on their enemies, thought to make a quicke dispatch of them. But the stones came so dangerously and so many, that they had ynough to defende themselues, so that, as long as they lasted, the Sauages fared very ill. But as the Shepherdes were afterwardes occupied in stowping downe to take vppe more stones, the Saâˆ£uages came running in to them so speedily with their massie clubs, that nowe they were without any hope of life, if presently a certaine strange Shepherdesse (of such singular beautie and comely feature, as made both the Sauages and the rest amazed at her goodly personage) had not come out of the thicke wood neere vnto the fountaine, where they before were singing. She had her bowe hanging on her left arme, and a quiuer of arrowes at her shoulder, in her hand a fine staffe of wilde oke, armed at the end with a long and well steeled pike. But when she saw the three Nymphes in so great distresse, and the effray betweene the two Sauages and the Shepherdes, who now looked for nothing more then present death, by putting quickly a sharpe headed arrow into her bowe, with no meane force and skill she shot it at one of the Sauages, leauing it halfe hidden in his hard brest, whereby the arrow of loue, that pearced his hart lost the force, and the Sauage his life. Neither was she slowe in putting another in her bowe, nor lesse skilfull in shooting it, for with the same she as well ended the enamoured passions of the second Sauage, as of the first. But setling her selfe to shoote at the third, that was keeping the three Nymphes, she could not so soone effect it, but that he came running in to her, within the length of his club, and had surely dispatched her with one blowe, if the faire Shepherdesse, by lifting vp her knottie staffe (as he was discharging vpoÌ„ her) had not taken it vpon the iron point (whereby his club brake in two peeces) and immediately requited him with another vpon the top of his crowne, wherewith she made him stagger on his knees, and then running a thrust at his face (and with such force and aime it was) that pearcing his eies, her staffe made speedie passage thorow his braines, so that the fierce. Sauage, yelling out a horrible and lowde grone, fell downe dead to the ground. The Nymphes seeing themselues deliuered from so great violence, and the Shepherdes and Shepherdesses from expected death, whereunto they were so neere, and how by the admirable valour and strength of that Shepherdesse, not oneâˆ£ly they, but the Shepherdes had escaped, they were in a traunce for a while, and could not afterwardes imagine her to be any humane wight. But the Shepherdesse comming now vnto them, began to vntie their handes, saying. They deserued no lesse punishment, then that they haue (faire Nymphes) that with these rude and