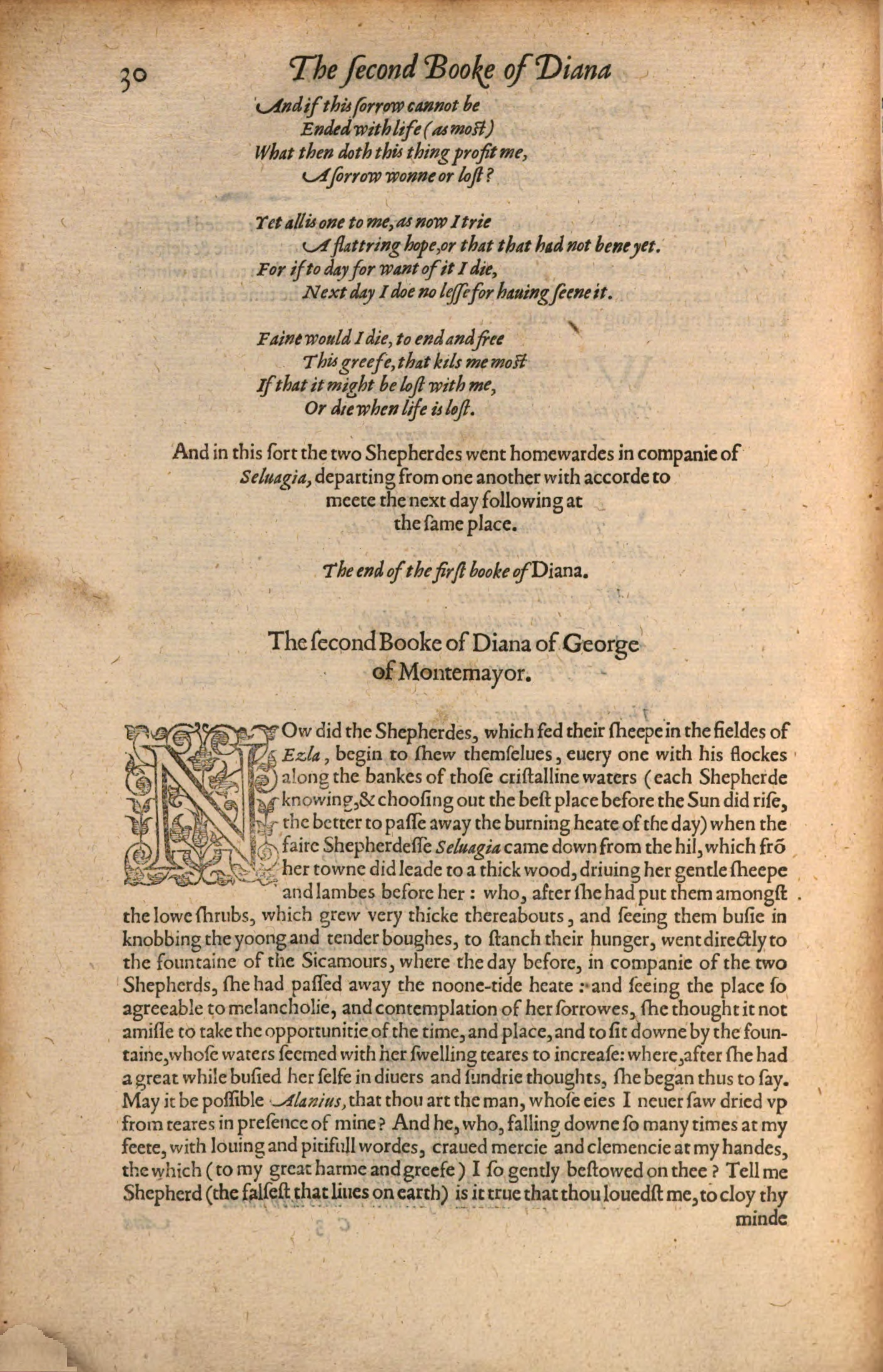 And if this sorrow cannot be
Ended with life (as most)
What then doth this thing profit me,
A sorrow wonne or lost?

Yet all is one to me, as now I trie
A flattring hope, or that that had not bene yet.
For if to day for want of it I die,
Next day I doe no lesse for hauing seene it.

Faine would I die, to end and free
This greefe, that kils me most
If that it might be lost with me,
Or die when life is lost.

And in this sort the two Shepherdes went homewardes in companie of
Seluagia, departing from one another with accorde to
meete the next day following at
the same place.

The end of the first booke of Diana.

The second Booke of Diana of George
of Montemayor.

NOw did the Shepherdes, which fed their sheepe in the fieldes of Ezla, begin to shew themselues, euery one with his flockes along the bankes of those cristalline waters (each Shepherde knowing, & choosing out the best place before the Sun did rise, the better to passe away the burning heate of the day) when the faire Shepherdesse Seluagia came down from the hil, which froÌ„ her towne did leade to a thick wood, driuing her gentle sheepe and lambes before her: who, after she had put them amongst the lowe shrubs, which grew very thicke thereabouts, and seeing them busie in knobbing the yoong and tender boughes, to stanch their hunger, went directly to the fountaine of the Sicamours, where the day before, in companie of the two Shepherds, she had passed away the noone-tide heate: and seeing the place so agreeable to melancholie, and contemplation of her sorrowes, she thought it not amisse to take the opportunitie of the time, and place, and to sit downe by the founâˆ£taine, whose waters seemed with her swelling teares to increase: where, after she had a great while busied her selfe in diuers and sundrie thoughts, she began thus to say. May it be possible Alanius, that thou art the man, whose eies I neuer saw dried vp from teares in presence of mine? And he, who, falling downe so many times at my feete, with louing and pitifull wordes, craued mercie and clemencie at my handes, the which (to my great harme and greefe) I so gently bestowed on thee? Tell me Shepherd (the falsest that liues on earth) is it true that thou louedst me, to cloy thy