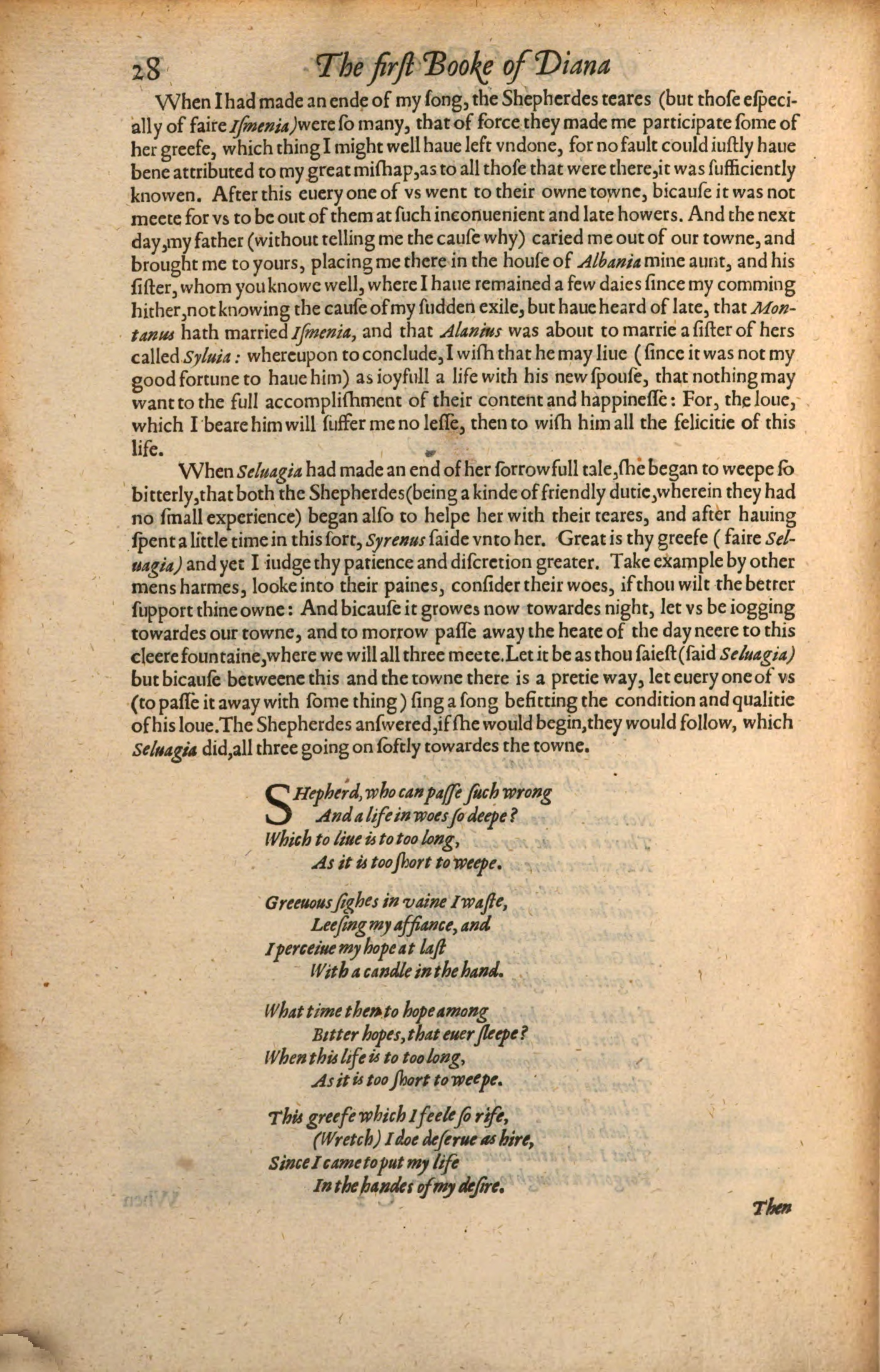 When I had made an ende of my song, the Shepherdes teares (but those especiâˆ£ally of faire Ismenia) were so many, that of force they made me participate some of her greefe, which thing I might well haue left vndone, for no fault could iustly haue bene attributed to my great mishap, as to all those that were there, it was sufficiently knowen. After this euery one of vs went to their owne towne, bicause it was not meete for vs to be out of them at such inconuenient and late howers. And the next day, my father (without telling me the cause why) caried me out of our towne, and brought me to yours, placing me there in the house of Albania mine aunt, and his sister, whom you knowe well, where I haue remained a few daies since my comming hither, not knowing the cause of my sudden exile, but haue heard of late, that Monâˆ£tanus hath married Ismenia, and that Alanius was about to marrie a sister of hers called Syluia: whereupon to conclude, I wish that he may liue (since it was not my good fortune to haue him) as ioyfull a life with his new spouse, that nothing may want to the full accomplishment of their content and happinesse: For, the loue, which I beare him will suffer me no lesse, then to wish him all the felicitie of this life.

When Seluagia had made an end of her sorrowfull tale, she began to weepe so bitterly, that both the Shepherdes (being a kinde of friendly dutie, wherein they had no small experience) began also to helpe her with their teares, and after hauing
spent a little time in this sort, Syrenus saide vnto her. Great is thy greefe (faire
Selâˆ£uagia) and yet I iudge thy patience and discretion greater. Take example by other mens harmes, looke into their paines, consider their woes, if thou wilt the better support thine owne: And bicause it growes now towardes night, let vs be iogging towardes our towne, and to morrow passe away the heate of the day neere to this cleere fountaine, where we will all three meete. Let it be as thou saiest (said Seluagia) but bicause betweene this and the towne there is a pretie way, let euery one of vs (to passe it away with some thing) sing a song befitting the condition and qualitie of his loue. The Shepherdes answered, if she would begin, they would follow, which Seluagia did, all three going on softly towardes the towne.

SHepherd who can passe such wrong
And a life in woes so deepe?
Which to liue is to too long,
As it is too short to weepe.

Greeuous sighes in vaine I waste,
Leesing my affiance, and
I perceiue my hope at last
With a candle in the hand.

What time then to hope among
Bitter hopes, that euer sleepe?
When this life is to too long,
As it is too short to weepe.

This greefe which I feele so rife,
(Wretch) I doe deserue as hire,
Since I came to put my life
In the handes of my desire.