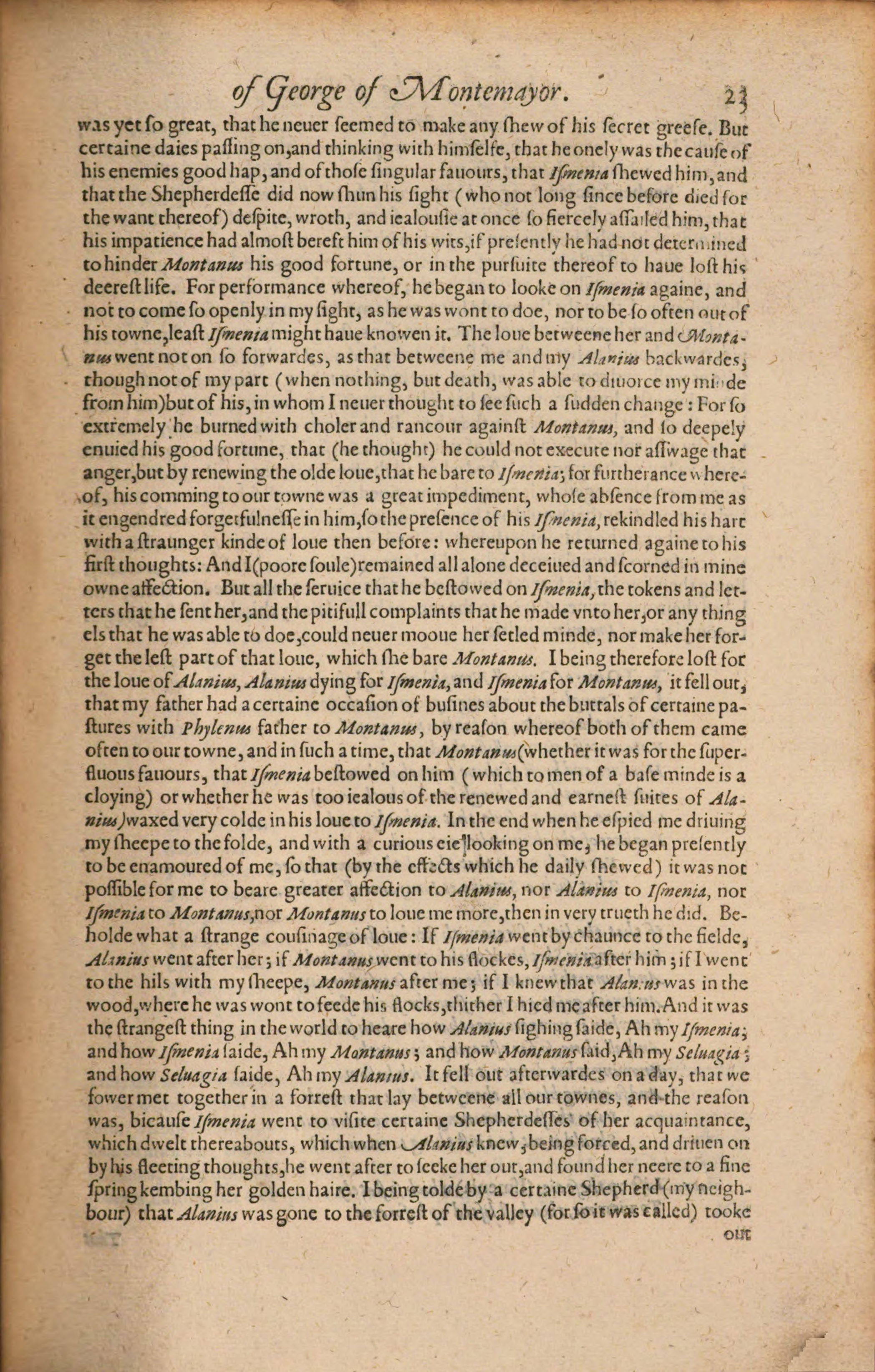 was yet so great, that he neuer seemed to make any shew of his secret greese. But certaine daies passing on, and thinking with himselfe, that he onely was the cause of his enemies good hap, and of those singular fauours, that Ismenia shewed him, and that the Shepherdesse did now shun his sight (who not long since before died for the want thereof) despite, wroth, and iealousie at once so fiercely assailed him, that his impatience had almost bereft him of his wits, if presently he had not determined to hinder Montanus his good fortune, or in the pursuite thereof to haue lost his deerest life. For performance whereof, he began to looke on Ismenia againe, and not to come so openly in my sight, as he was wont to doe, nor to be so often out of his towne, least Ismenia might haue knowen it. The loue betweene her and Montaâˆ£nuswent not on so forwardes, as that betweene me and my Alaniusbackwardes, though not of my part (when nothing, but death, was able to diuorce my minde from him) but of his, in whom I neuer thought to see such a sudden change: For so extremely he bumed with choler and rancour against Montanus, and so deepely enuied his good fortune, that (he thought) he could not execute nor asswage that anger, but by renewing the olde loue, that he bare to Ismenia; for furtherance whereâˆ£of, his comming to out towne was a great impediment, whose absence from me as it engendred forgetfulnesse in him, so the presence of his Ismenia, rekindled his hart with a straunger kinde of loue then before: whereupon he returned againe to his fust thoughts: And I (poore soule) remained all alone deceiued and scorned in mine owne affection. But all the seruice that he bestowed on Ismenia, the tokens and letâˆ£ters that he sent her, and the pitifull complaints that he made vnto her, or any thing els that he was able to doe, could neuer mooue her fetled minde, nor make her forâˆ£get the lest part of that loue, which she bare Montanus. I being therefore lost for the loue of Alanius, Alanius dying for Ismenia, and Ismenia for Montanus, it fell out, that my father had a certame occasion of busines about the buttals of certaine paâˆ£stures with Phylenus father to Montanus, by reason whereof both of them came often to our towne, and in such a time, that Mont anus (whether it was for the superâˆ£fluous fauours, that Ismenia bestowed on him (which to men of a base minde is a cloying) or whether he was too iealous of the renewed and earnest suites of Alaâˆ£nius) waxed very colde in his loue to Ismenia. In the end when he espied me driuing my sheepe to the folde, and with a curious eie looking on me, he began presently to be enamoured of me, so that (by the effects which he daily shewed) it was not possible for me to beare greater affection to Alanius, nor Alanius to Ismenia, nor Ismenia to Montanus, nor Montanus to loue me more, then in very trueth he did. Beâˆ£holde what a strange cousinage of loue: If Ismenia went by chaunce to the fielde, Alanius went after her; if Montanus went to his flockes, Ismenia after him; if I went to the hils with my sheepe, Montanus after me; if I knew that Alanius was in the wood, where he was wont to seede his flocks, thither I hied me after him. And it was the strangest thing in the world to heart how Alanius sighing saide, Ah my Ismenia; and how Ismenia saide, Ah my Montanus; and how Montanus said, Ah my Seluagia; and how Seluagia saide, Ah my Alanius. It fell out afterwardes on a day, that we fower met together in a forrest that lay betweene all our townes, and the reason was, bicause Ismenia went to visite certaine Shepherdesses of her acquaintance, which dwelt thereabouts, which when Alanius knew, being forced, and driuen on by his fleeting thoughts, he went after to seeke her out, and found her neere to a fine spring kembing her golden haire. I being tolde by a certaine Shepherd (my neighâˆ£bout) that Alanius was gone to the forrest of the valley (for so it was called) tooke