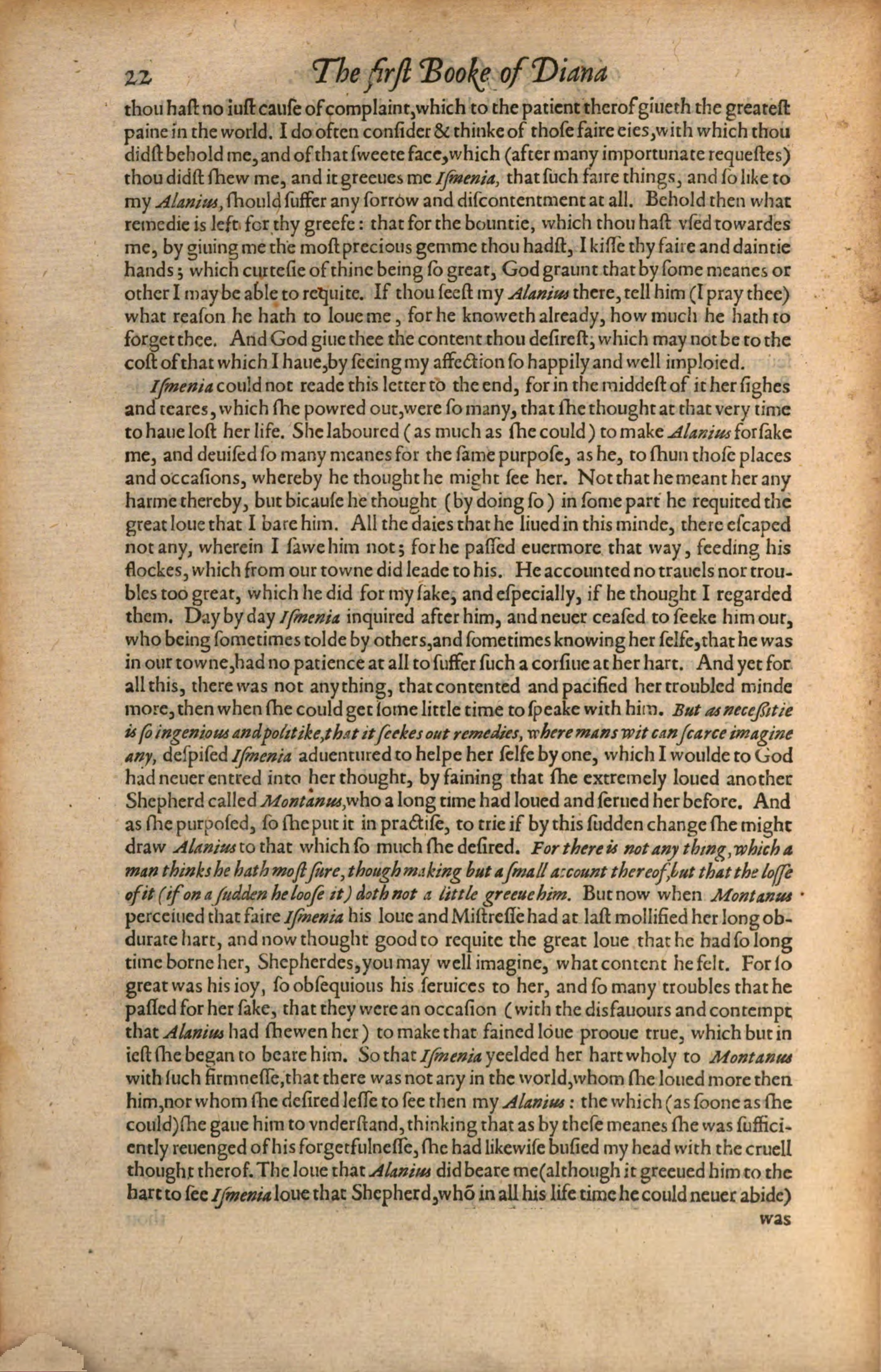 thou hast no iust cause of complaint, which to the patient therof giueth the greatest paine in the world. I do often consider & thinke of those faire eies, with which thou didst behold me, and of that sweete face, which (after many importunate requestestes) thou didst shew me, and it greeues me Ismenia, that such faire things, and so like to my Alanius, should suffer any sorrow and discontentment at all. Behold then what remedie is left for thy greefe: that for the bountie, which thou hast vsed towardes me, by giuing me the most precious gemme thou hadst, I kisse thy faire and daintie hands; which curtesie of thine being so great, God graunt that by some meanes or other I may be able to requite. If thou seest my Alanius there, tell him (I pray thee) what reason he hath to loue me, for he knoweth already, how much he hath to forget thee. And God glue thee the content thou desirest, which may not be to the cost of that which I haue, by seeing my affection so happily and well imploied.
Ismenia could not reade this letter to the end, for in the middest of it her sighes and teares, which she powred out, were so many, that she thought at that very time to haue lost her life. She laboured (as much as she could) to make Alanius forsake me, and deuised so many meanes for the same purpose, as he, to shun those places and occasions, whereby he thought he might see her. Not that he meant her any harme thereby, but bicause he thought (by doing so) in some part he requited the great loue that I bare him. All the daies that he liued in this minde, there escaped not any, wherein I sawe him not; for he passed euermore that way, feeding his flockes, which from our towne did leade to his. He accounted no trauels nor trouâˆ£bles too great, which he did for my sake, and especially, if he thought I regarded them. Day by day Ismenia inquired after him, and neuer ceased to seeke him out, who being sometimes tolde by others, and sometimes knowing her selfe, that he was in our towne, had no patience at all to suffer such a corsiue at her hart. And yet for all this, there was not anything, that contented and pacified her troubled minde more, then when she could get some little time to speake with him. But as necessitie is so ingenious and politike, that it seekes out remedies, where mans wit can scarce imagine any, despised Ismenia aduentured to helpe her selfe by one, which I woulde to God had neuer entred into her thought, by faining that she extremely loued another Shepherd called Montanus, who a long time had loued and serued her before. And as she purposed, so she put it in practise, to trie if by this sudden change she might draw
Alanius to that which so much she desired. For there is not any thing, which a man thinks he hath most sure, though making but a small account thereof, but that the losse of it (if on a sudden he loose it) doth not a little greeue him. But now when Montanus perceiued that faire Ismenia his loue and Mistresse had at last mollified her long obâˆ£durate hart, and now thought good to requite the great loue that he had so long time borne her, Shepherdes, you may well imagine, what content he felt. For so great was his ioy, so obsequious his seruices to her, and so many troubles that he passed for her sake, that they were an occasion (with the disfauours and contempt that Alanius had shewen her) to make that fained loue prooue true, which but in iest she began to beare him. So that Ismenia yeelded her hart wholy to Montanus with such firmnesse, that there was not any in the world, whom she loued more then him, nor whom she desired lesse to see then my Alanius: the which (as soone as she could) she gaue him to vnderstand, thinking that as by these meanes she was sufficiâˆ£ently reuenged of his for getfulnesse, she had likewise busied my head with the cruell thought therof. The loue that Alanius did beare me (although it greeued him to the hart to see Ismenia loue that Shepherd, whoÌ„ in all his life time he could neuer abide)