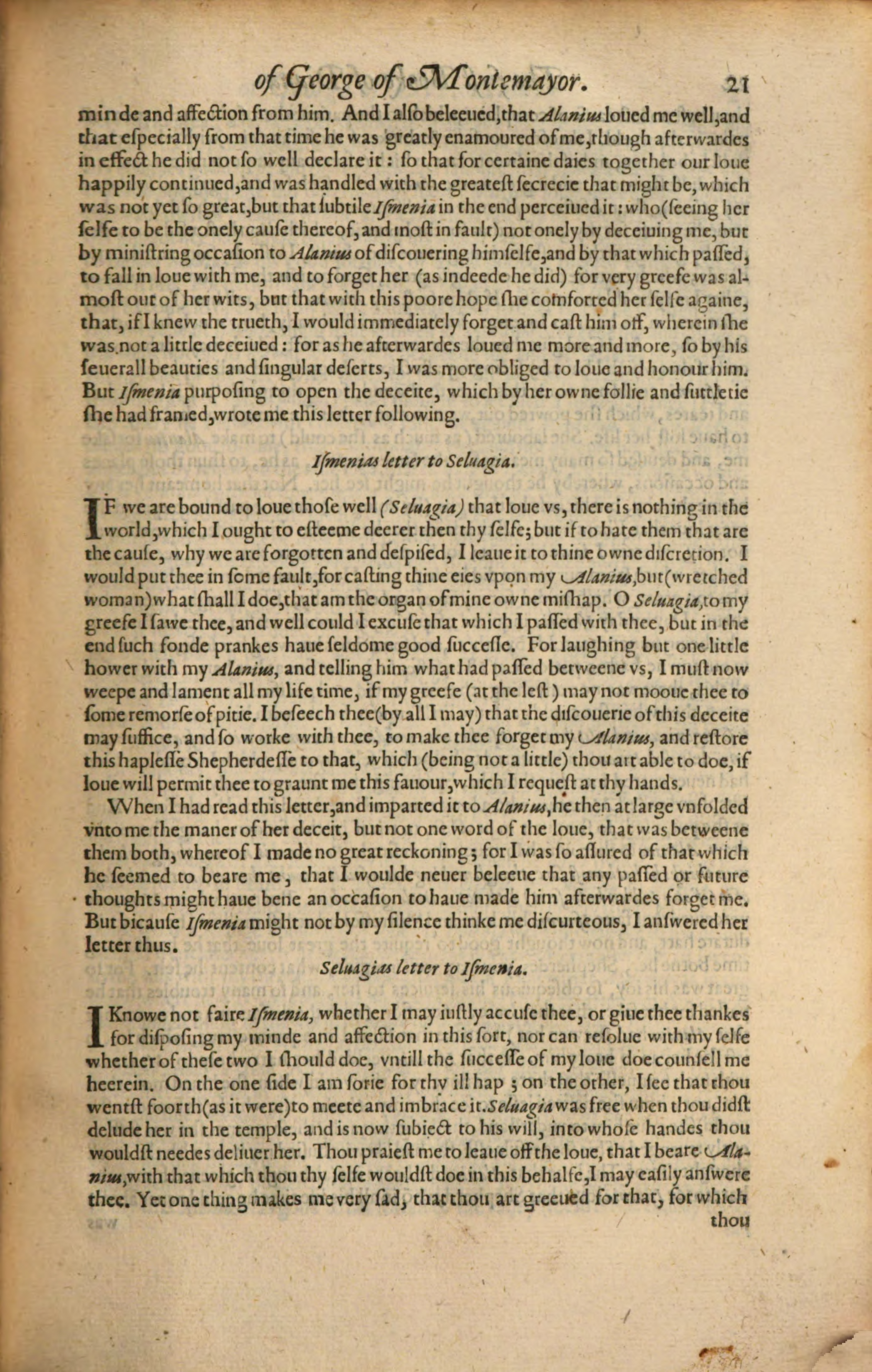 minde and affection from him. And I also beleeued, that Alanius loued me well, and that especially from that time he was greatly enamoured of me, though afterwardes in effect he did not so well declare it: so that for certaine daies together our loue happily continued, and was handled with the greatest secrecie that might be, which was not yet so great, but that subtile Ismenia in the end perceiued it: who (seeing her selfe to be the onely cause thereof, and most in fault) not onely by deceiuing me, but by ministring occasion to Alanius of discouering himselfe, and by that which passed, to fall in loue with me, and to forget her (as indeede he did) for very greefe was alâˆ£most out of her wits, but that with this poore hope she comforted her selfe againe, that, if I knew the trueth, I would immediately forget and cast him off, wherein she was not a little deceiued: for as he afterwardes loued me more and more, so by his seuerall beauties and singular deserts, I was more obliged to loue and honour him. But Ismenia purposing to open the deceite, which by her owne follie and suttletie she had framed, wrote me this letter following.

Ismenias letter to Seluagia.
\
IF we are bound to loue those well (Seluagia) that loue vs, there is nothing in the world, which I ought to esteeme deerer then thy selfe; but if to hate them that are the cause, why we are forgotten and despised, I leaue it to thine owne discretion. I would put thee in some fault, for casting thine eies vpon my Alanius, but (wretched woman) what shall I doe, that am the organ of mine owne mishap. O Seluagia, to my greefe I sawe thee, and well could I excuse that which I passed with thee, but in the end such fonde prankes haue seldome good successe. For laughing but one little hower with my Alanius, and telling him what had passed betweene vs, I must now weepe and lament all my life time, if my greefe (at the lest) may not mooue thee to some remorse of pitie. I beseech thee (by all I may) that the discouerie of this deceite may suffice, and so worke with thee, to make thee forget my Alanius, and restore this haplesse Shepherdesse to that, which (being not a little) thou art able to doe, if loue will permit thee to graunt me this fauour, which I request at thy hands.
When I had read this letter, and imparted it to Alanius, he then at large vnfolded vnto me the maner of her deceit, but not one word of the loue, that was betweene them both, whereof I made no great reckoning; for I was so assured of that which he seemed to beare me, that I woulde neuer beleeue that any passed or future thoughts might haue bene an occasion to haue made him afterwardes forget me. But bicause Ismenia might not by my silence thinke me discurteous, I answered her letter thus.

I Knowe not faire Ismenia, whether I may iustly accuse thee, or giue thee thankes for disposing my minde and affection in this sort, nor can resolue with my selfe whether of these two I should doe, vntill the successe of my loue doe counsell me heerein. On the one side I am sorie for thy ill hap; on the other, I see that thou wentst foorth (as it were) to meete and imbrace it. Seluagia was free when thou didst delude her in the temple, and is now subiect to his will, into whose handes thou wouldst needes deliuer her. Thou praiest me to leaue off the loue, that I beare Alaâˆ£nius, with that which thou thy selfe wouldst doe in this behalfe, I may easily answere thee. Yet one thing makes me very sad, that thou art greeued for that, for which