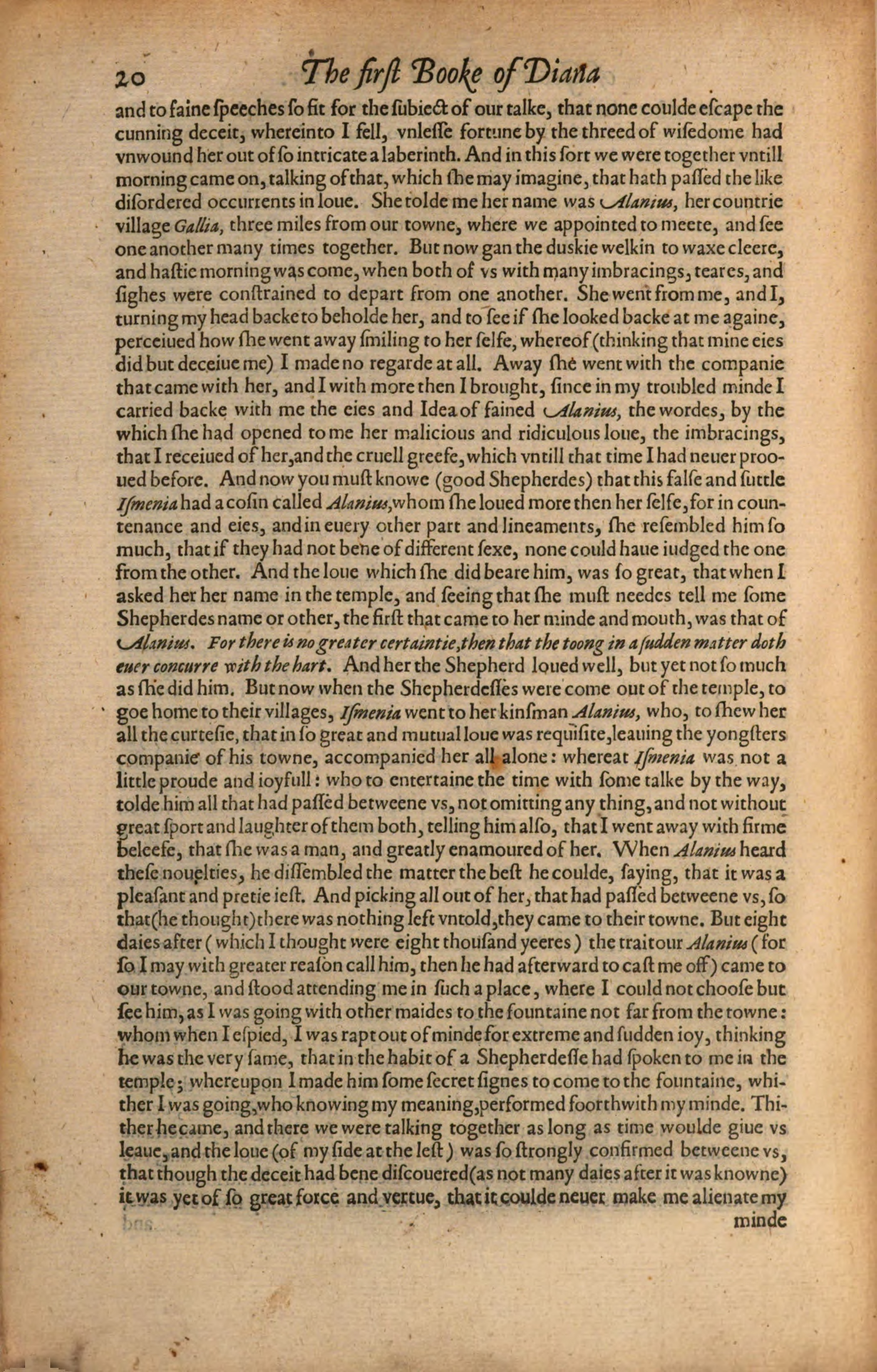 and to faine speeches so fit for the subiect of our talke, that none coulde escape the cunning deceit, whereinto I fell, vnlesse fortune by the threed of wisedome had vnwound her out of so intricate a laberinth. And in this sort we were together vntill morning came on, talking of that, which she may imagine, that hath passed the like disordered occurrents in loue. She tolde me her name was Alanius, her countrie village Gallia, three miles from our towne, where we appointed to meete, and see one another many times together. But now gan the duskie welkin to waxe cleere, and hastie morning was come, when both of vs with many imbracings, teares, and sighes were constrained to depart from one another. She went from me, and I, turning my head backe to beholde her, and to see if she looked backe at me againe, perceiued how she went away smiling to her selfe, whereof (thinking that mine eies did but deceiue me) I made no regarde at all. Away she went with the companie that came with her, and I with more then I brought, since in my troubled minde I carried backe with me the eies and Idea of fained Alanius, the wordes, by the which she had opened to me her malicious and ridiculous loue, the imbracings, that I receiued of her, and the cruell greefe, which vntill that time I had neuer prooâˆ£ued before. And now you must knowe (good Shepherdes) that this false and suttle Ismenia had a cosin called Alanius, whom she loued more then her selfe, for in counâˆ£tenance and eies, and in euery other part and lineaments, she resembled him so much, that if they had not bene of different sexe, none could haue iudged the one from the other. And the loue which she did beare him, was so great, that when I asked her her name in the temple, and seeing that she must needes tell me some Shepherdes name or other, the first that came to her minde and mouth, was that of Alanius. For there is no greater certaintie, then that the toong in a sudden matter doth euer concurre with the hart. And her the Shepherd loued well, but yet not so much as she did him. But now when the Shepherdesses were come out of the temple, to goe home to their villages, Ismenia went to her kinsman Alanius, who, to shew her all the curtesie, that in so great and mutual loue was requisite, leauing the yongsters companie of his towne, accompanied her all alone: whereat Ismenia was not a little proude and ioyfull: who to entertaine the time with some talke by the way, tolde him all that had passed betweene vs, not omitting any thing, and not without great sport and laughter of them both, telling him also, that I went away with firme beleefe, that she was a man, and greatly enamoured of her. When Alanius heard these nouelties, he dissembled the matter the best he coulde, saying, that it was a pleasant and pretie iest. And picking all out of her, that had passed betweene vs, so that (he thought) there was nothing left vntold, they came to their towne. But eight daies after (which I thought were eight thousand yeeres) the traitour Alanius (for so I may with greater reason call him, then he had afterward to cast me off) came to our towne, and stood attending me in such a place, where I could not choose but see him, as I was going with other maides to the fountaine not far from the towne: whom when I espied, I was rapt out of minde for extreme and sudden ioy, thinking he was the very same, that in the habit of a Shepherdesse had spoken to me in the temple; whereupon I made him some secret signes to come to the fountaine, whiâˆ£ther I was going, who knowing my meaning, performed foorthwith my minde. Thiâˆ£ther he came, and there we were talking together as long as time woulde giue vs leaue, and the loue (of my side at the lest) was so strongly confirmed betweene vs, that though the deceit had bene discouered (as not many daies after it was knowne) it was yet of so great force and vertue, that it coulde neuer make me alienate my