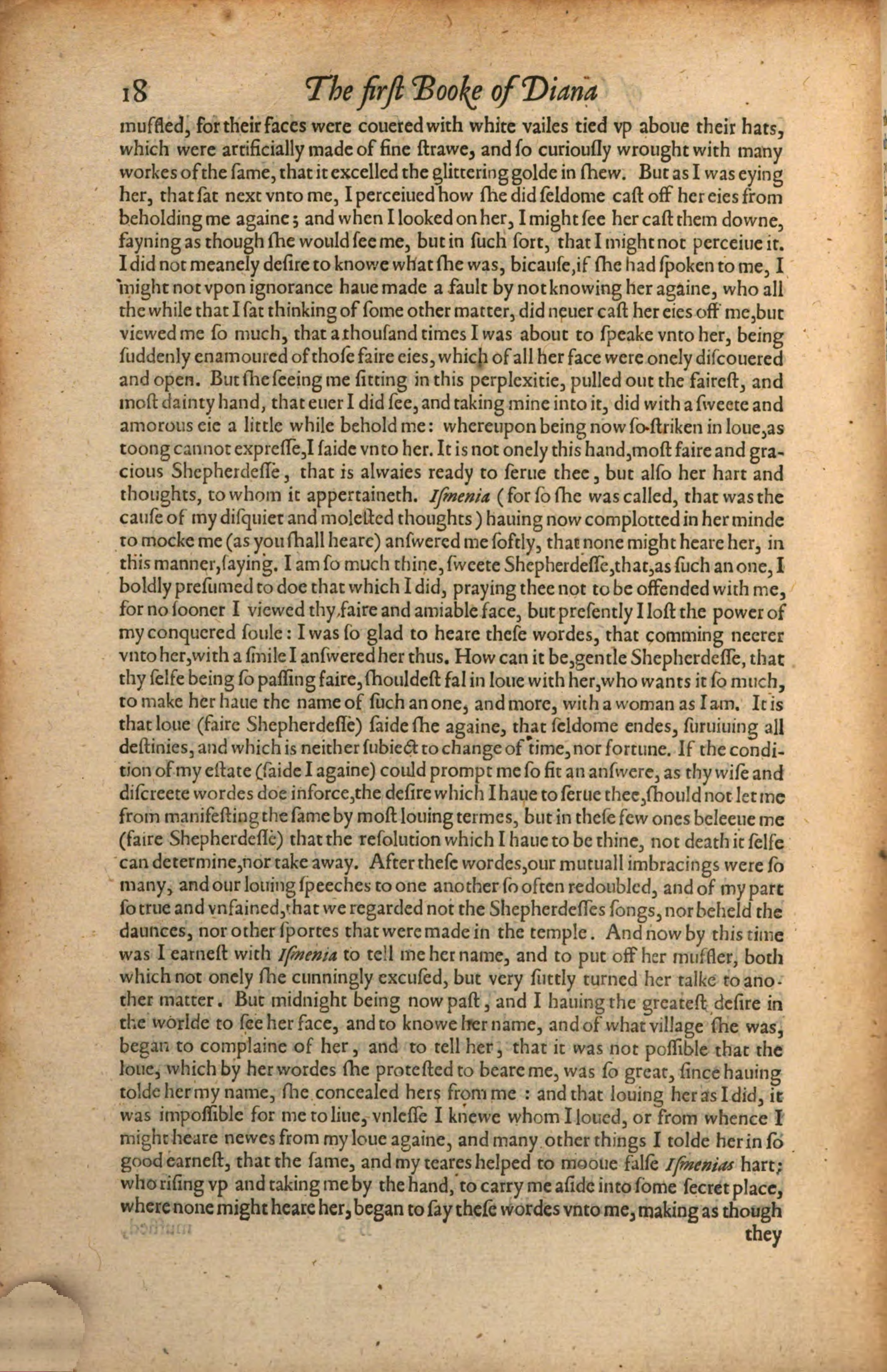 muffled, for their faces were couered with white vailes tied vp aboue their hats, which were artificially made of fine strawe, and so curiously wrought with many workes of the same, that it excelled the glittering golde in shew. But as I was eying her, that sat next vnto me, I perceiued how she did seldome cast off her eies from beholding me againe; and when I looked on her, I might see her cast them downe, fayning as though she would see me, but in such sort, that I might not perceiue it. I did not meanely desire to knowe what she was, bicause, if she had spoken to me, I might not vpon ignorance haue made a fault by not knowing her againe, who all the while that I sat thinking of some other matter, did neuer cast her eies off me, but viewed me so much, that a thousand times I was about to speake vnto her, being suddenly enamoured of those faire eies, which of all her face were onely discouered and open. But she seeing me sitting in this perplexitie, pulled out the fairest, and most dainty hand, that euer I did see, and taking mine into it, did with a sweete and amorous eie a little while behold me: whereupon being now so striken in loue, as toong cannot expresse, I saide vnto her. It is not onely this hand, most faire and graâˆ£cious Shepherdesse, that is alwaies ready to serue thee, but also her hart and thoughts, to whom it appertaineth. Ismenia (for so she was called, that was the cause of my disquiet and molested thoughts) hauing now complotted in her minde to mocke me (as you shall heare) answered me softly, that none might heare her, in this manner, saying. I am so much thine, sweete Shepherdesse, that, as such an one, I boldly presumed to doe that which I did, praying thee not to be offended with me, for no sooner I viewed thy faire and amiable face, but presently I lost the power of my conquered soule: I was so glad to heare these wordes, that comming neerer vnto her, with a smile I answered her thus. How can it be, gentle Shepherdesse, that thy selfe being so passing faire, shouldest fal in loue with her, who wants it so much, to make her haue the name of such an one, and more, with a woman as I am. It is that loue (faire Shepherdesse) saide she againe, that seldome endes, suruiuing all destinies, and which is neither subiect to change of time, nor fortune. If the condiâˆ£tion of my estate (saide I againe) could prompt me so fit an answere, as thy wise and discreete wordes doe inforce, the desire which I haue to serue thee, should not let me from manifesting the same by most louing termes, but in these few ones beleeue me (faire Shepherdesse) that the resolution which I haue to be thine, not death it selfe can determine, nor take away. After these wordes, our mutuall imbracings were so many, and our louing speeches to one another so often redoubled, and of my part so true and vnfained, that we regarded not the Shepherdesses songs, nor beheld the daunces, nor other sportes that were made in the temple. And now by this time was I earnest with Ismenia to tell me her name, and to put off her muffler, both which not onely she cunningly excused, but very suttly turned her talke to anoâˆ£ther matter. But midnight being now past, and I hauing the greatest desire in the worlde to see her face, and to knowe her name, and of what village she was, began to complaine of her, and to tell her, that it was not possible that the loue, which by her wordes she protested to beare me, was so great, since hauing tolde her my name, she concealed hers from me: and that louing her as I did, it was impossible for me to liue, vnlesse I knewe whom I loued, or from whence I might heare newes from my loue againe, and many other things I tolde her in so good earnest, that the same, and my teares helped to mooue false Ismenias hart: who rising vp and taking me by the hand, to carry me aside into some secret place, where none might heare her, began to say these wordes vnto me, making as though