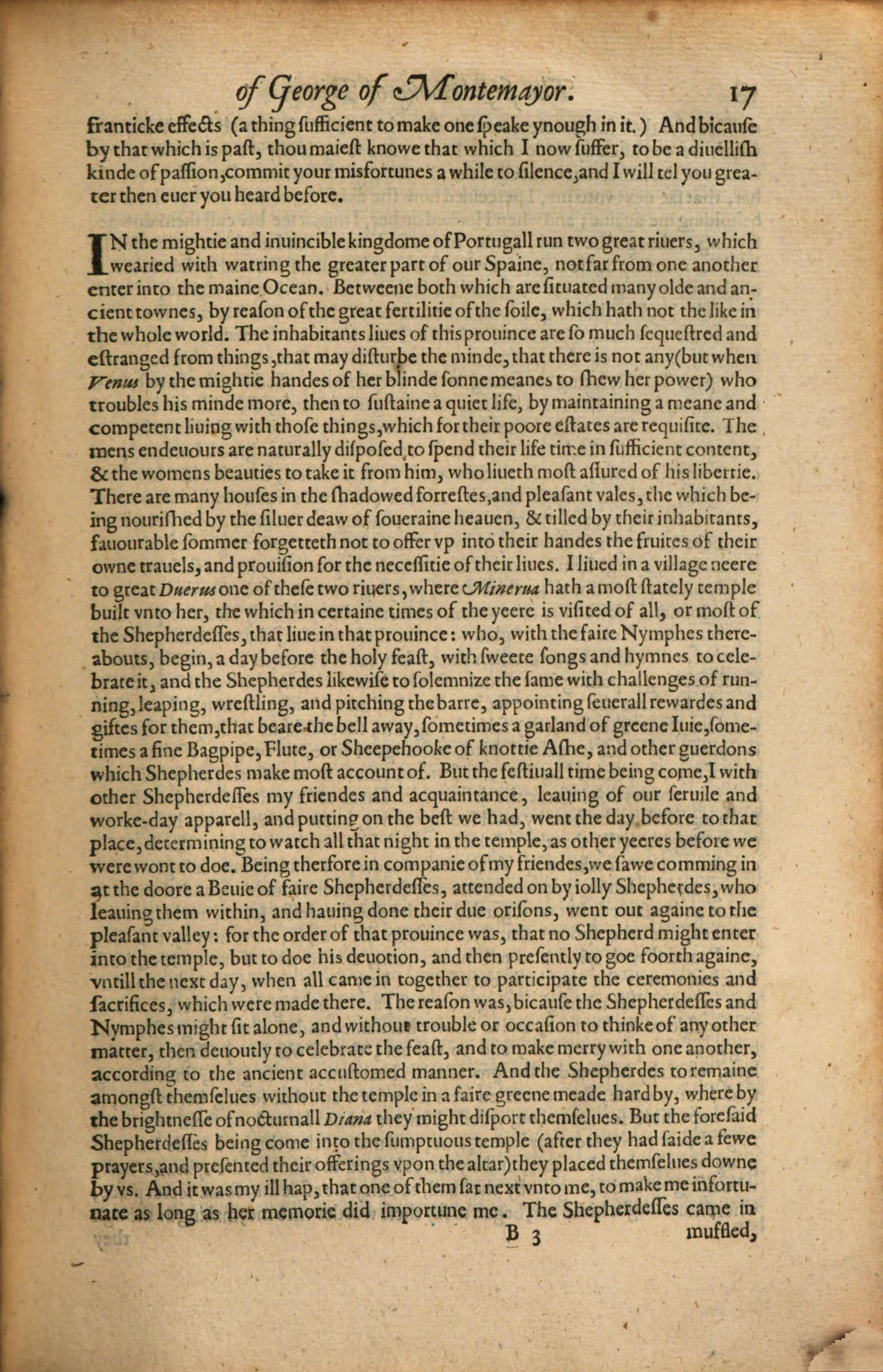 franticke effects (a thing sufficient to make one speake ynough in it.) And bicause by that which is past, thou maiest knowe that which I now suffer, to be a diuellish kinde of passion, commit your misfortunes a while to silence, and I will tel you greaâˆ£ter then euer you heard before.

IN the mightie and inuincible kingdome of Portugall run two great riuers, which wearied with watring the greater part of our Spaine, not far from one another enter into the maine Ocean. Betweene both which are situated many olde and anâˆ£cient townes, by reason of the great fertilitie of the soile, which hath not the like in the whole world. The inhabitants liues of this prouince are so much sequestred and estranged from things, that may disturbe the minde, that there is not any (but when Venus by the mightie handes of her blinde sonne meanes to shew her power) who troubles his minde more, then to sustaine a quiet life, by maintaining a meane and competent liuing with those things, which for their poore estates are requisite. The mens endeuours are naturally disposed to spend their life time in sufficient content, & the womens beauties to take it from him, who liueth most assured of his libertie. There are many houses in the shadowed forrestes, and pleasant vales, the which beâˆ£ing nourished by the siluer deaw of soueraine heauen, & tilled by their inhabitants, fauourable sommer forgetteth not to offer vp into their handes the fruites of their owne trauels, and prouision for the necessitie of their liues. I liued in a village neere to great Duerus one of these two riuers, where Minerua hath a most stately temple built vnto her, the which in certaine times of the yeere is visited of all, or most of the Shepherdesses, that liue in that prouince: who, with the faire Nymphes thereâˆ£abouts, begin, a day before the holy feast, with sweete songs and hymnes to celeâˆ£brate it, and the Shepherdes likewise to solemnize the same with challenges of runâˆ£ning, leaping, wrestling, and pitching the barre, appointing seuerall rewardes and giftes for them, that beare the bell away, sometimes a garland of greene Iuie, someâˆ£times a fine Bagpipe, Flute, or Sheepehooke of knottie Ashe, and other guerdons which Shepherdes make most account of. But the festiuall time being come, I with other Shepherdesses my friendes and acquaintance, leauing of our seruile and worke-day apparell, and putting on the best we had, went the day before to that place, determining to watch all that night in the temple, as other yeeres before we were wont to doe. Being therfore in companie of my friendes, we sawe comming in at the doore a Beuie of faire Shepherdesses, attended on by iolly Shepherdes, who leauing them within, and hauing done their due orisons, went out againe to the pleasant valley: for the order of that prouince was, that no Shepherd might enter into the temple, but to doe his deuotion, and then presently to goe foorth againe, vntill the next day, when all came in together to participate the ceremonies and sacrifices, which were made there. The reason was, bicause the Shepherdesses and Nymphes might sit alone, and without trouble or occasion to thinke of any other matter, then deuoutly to celebrate the feast, and to make merry with one another, according to the ancient accustomed manner. And the Shepherdes to remaine amongst themselues without the temple in a faire greene meade hard by, where by the brightnesse of nocturnall Diana they might disport themselues. But the foresaid Shepherdesses being come into the sumptuous temple (after they had saide a fewe prayers, and presented their offerings vpon the altar) they placed themselues downe by vs. And it was my ill hap, that one of them sat next vnto me, to make me infortuâˆ£nate as long as her memorie did importune me. The Shepherdesses came in