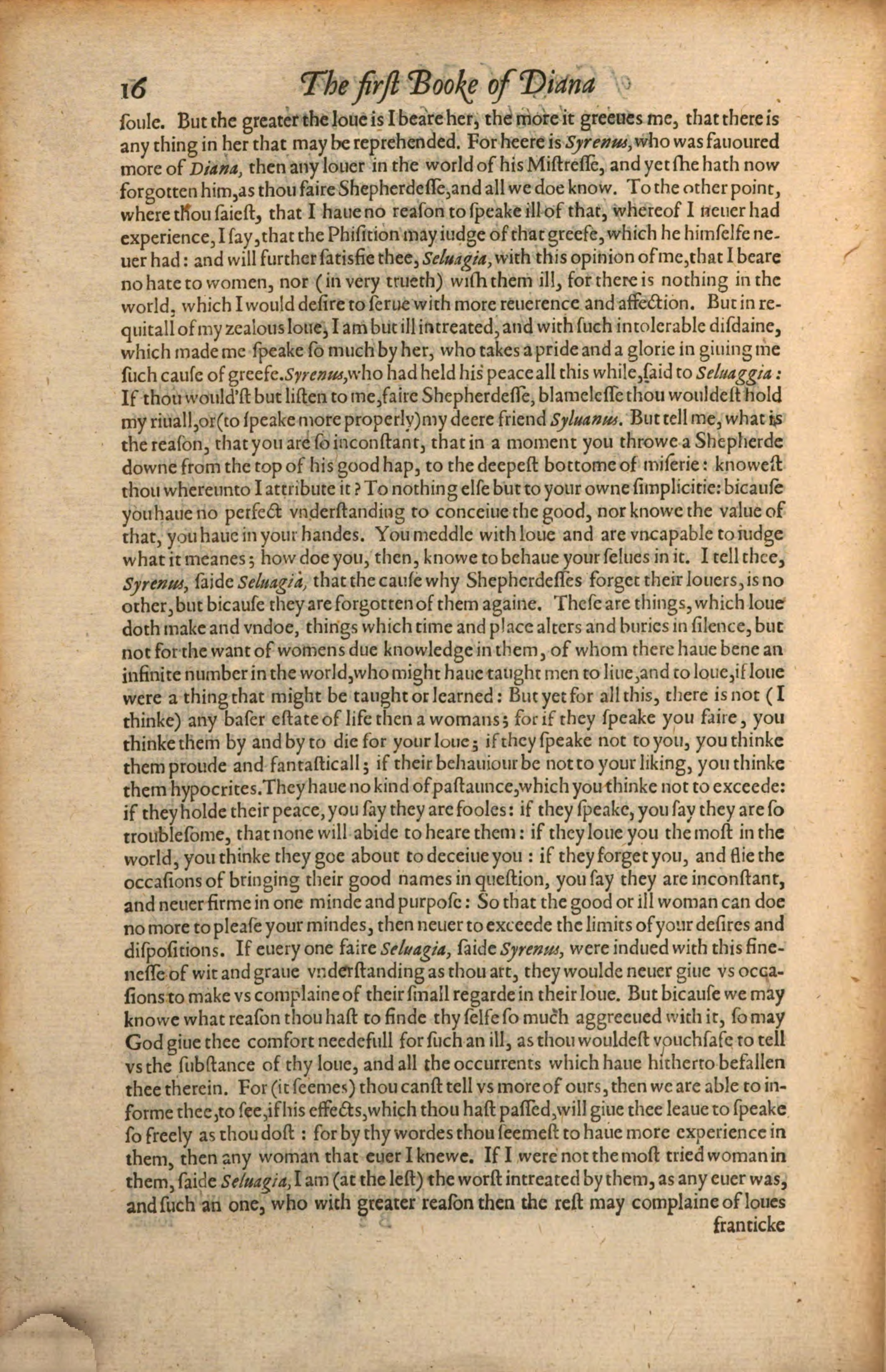 soule. But the greater the loue is I beare her, the more it greeues me, that there is any thing in her that may be reprehended. For heere is Syrenus, who was fauoured more of Diana, then any louer in the world of his Mistresse, and yet she hath now forgotten him, as thou faire Shepherdesse, and all we doe know. To the other point, where thou saiest, that I haue no reason to speake ill of that, whereof I neuer had experience, I say, that the Phisition may iudge of that greefe, which he himselfe neâˆ£uer had: and will further satisfie thee, Seluagia, with this opinion of me, that I beare no hate to women, nor (in very trueth) wish them ill, for there is nothing in the world, which I would desire to serue with more reuerence and affection. But in reâˆ£quitall of my zealous loue, I am but ill intreated, and with such intolerable disdaine, which made me speake so much by her, who takes a pride and a glorie in giuing me such cause of greefe, Syrenus, who had held his peace all this while, said to Seluaggia: If thou wouldâ€™st but listen to me, faire Shepherdesse, blamelesse thou wouldest hold my riuall, or (to speake more properly) my deere friend Syluanus. But tell me, what is the reason, that you are so inconstant, that in a moment you throwe a Shepherde downe from the top of his good hap, to the deepest bottome of miserie: knowest thou whereunto I attribute it? To nothing else but to your owne simplicitie: bicause you haue no perfect vnderstanding to conceiue the good, nor knowe the value of that, you haue in your handes. You meddle with loue and are vncapable to iudge what it meanes; how doe you, then, knowe to behaue your selues in it. I tell thee, Syrenus, saide Seluagia, that the cause why Shepherdesses forget their louers, is no other, but bicause they are forgotten of them againe. These are things, which loue doth make and vndoe, things which time and place alters and buries in silence, but not for the want of womens due knowledge in them, of whom there haue bene an infinite number in the world, who might haue taught men to liue, and to loue, if loue were a thing that might be taught or learned: But yet for all this, there is not (I thinke) any baser estate of life then a womans; for if they speake you faire, you thinke them by and by to die for your loue; if they speake not to you, you thinke them proude and fantasticall; if their behauiour be not to your liking, you thinke them hypocrites. They haue no kind of pastaunce, which you thinke not to exceede: if they holde their peace, you say they are fooles: if they speake, you say they are so troublesome, that none will abide to heare them: if they loue you the most in the world, you thinke they goe about to deceiue you: if they forget you, and flie the occasions of bringing their good names in question, you say they are inconstant, and neuer firme in one minde and purpose: So that the good or ill woman can doe no more to please your mindes, then neuer to exceede the limits of your desires and dispositions. If euery one faire Seluagia, saide Syrenus, were indued with this fineâˆ£nesse of wit and graue vnderstanding as thou art, they woulde neuer giue vs occaâˆ£sions to make vs complaine of their small regarde in their loue. But bicause we may knowe what reason thou hast to finde thy selfe so much aggreeued with it, so may God giue thee comfort needefull for such an ill, as thou wouldest vouchsafe to tell vs the substance of thy loue, and all the occurrents which haue hitherto befallen thee therein. For (it seemes) thou canst tell vs more of ours, then we are able to inâˆ£forme thee, to see, if his effects, which thou hast passed, will giue thee leaue to speake so freely as thou dost: for by thy wordes thou seemest to haue more experience in them, then any woman that euer I knewe. If I were not the most tried woman in them, saide Seluagia, I am (at the lest) the worst intreated by them, as any euer was, and such an one, who with greater reason then the rest may complaine of loues