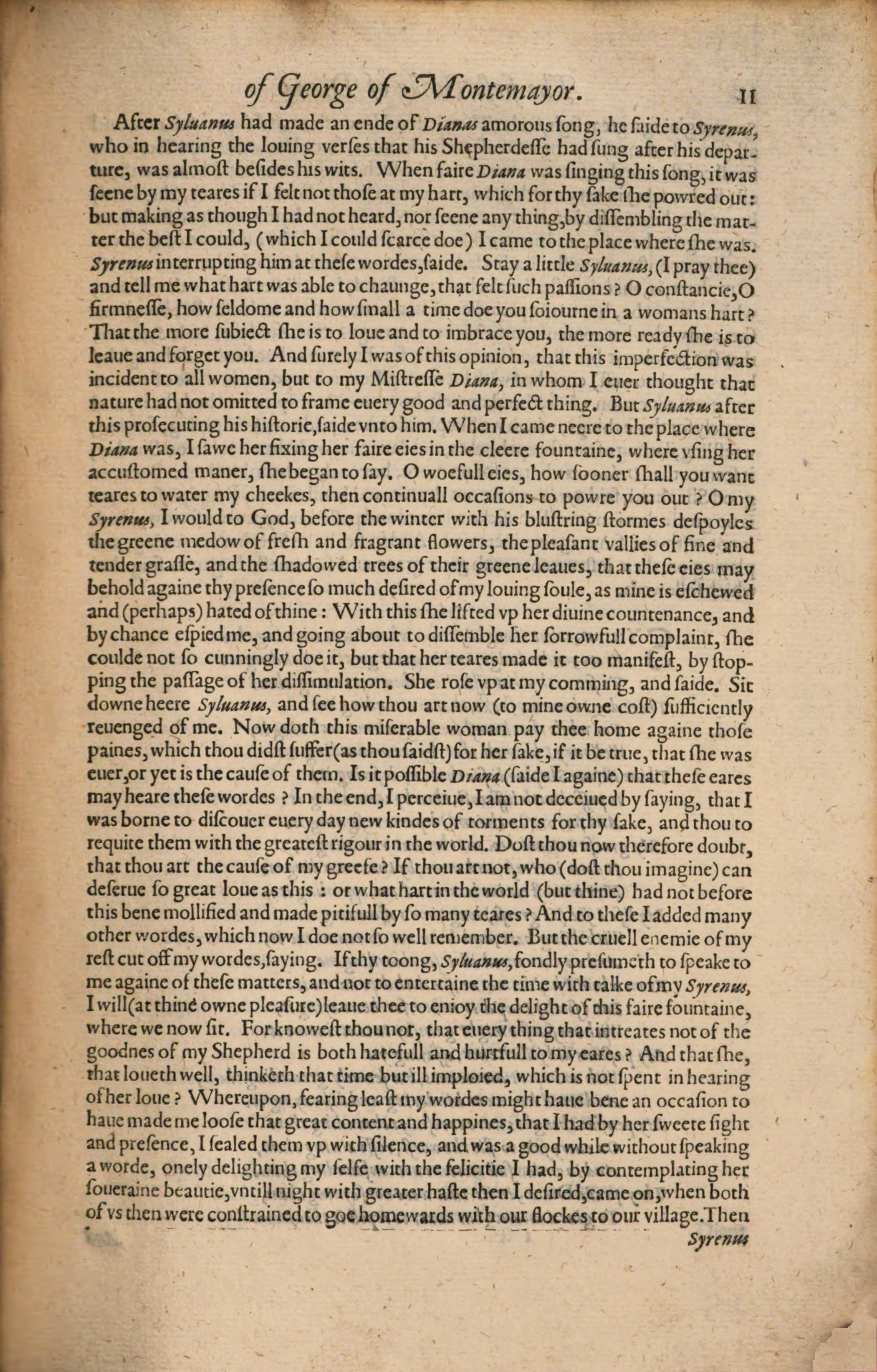 After Syluanus had made an ende of Dianas amorous song, he saide to Syrenus, who in hearing the louing verses that his Shepherdesse had sung after his deparâˆ£ture, was almost besides his wits. When faire Diana was singing this song, it was seene by my teares if I felt not those at my hart, which for thy sake she powred out: but making as though I had not heard, nor seene any thing, by dissembling the matâˆ£ter the best I could, (which I could scarce doe) I came to the place where she was. Syrenus interrupting him at these wordes, saide. Stay a little Syluanus, (I pray thee) and tell me what hart was able to chaunge, that â€¢elt such passions? O constancie, O firmnesse, how seldome and how small a time doe you soiourne in a womans hart? That the more subiect she is to loue and to imbrace you, the more ready she is to leaue and forget you. And surely I was of this opinion, that this imperfection was incident to all women, but to my Mistresse Diana, in whom I euer thought that nature had not omitted to frame euery good and perfect thing. But Syluanus after this prosecuting his historie, saide vnto him. When I came neere to the place where Diana was, I sawe her fixing her faire eies in the cleere fountaine, where vsing her accustomed maner, she began to say. O woefull eies, how sooner shall you want teares to water my cheekes, then continuall occasions to powre you out? O my Syrenus, I would to God, before the winter with his blustring stormes despoyles the greene medow of fresh and fragrant flowers, the pleasant vallies of fine and tender grasse, and the shadowed trees of their greene leaues, that these eies may behold againe thy presence so much desired of my louing soule, as mine is eschewed and (perhaps) hated of thine: With this she lifted vp her diuine countenance, and by chance espied me, and going about to dissemble her sorrowfull complaint, she coulde not so cunningly doe it, but that her teares made it too manifest, by stopâˆ£ping the passage of her dissimulation. She rose vp at my comming, and saide. Sit downe heere Syluanus, and see how thou art now (to mine owne cost) sufficiently reuenged of me. Now doth this miserable woman pay thee home againe those paines, which thou didst suffer (as thou saidst) for her sake, if it be true, that she was euer, or yet is the cause of them. Is it possible Diana (saide I againe) that these eares may heare these wordes? In the end, I perceiue, I am not deceiued by saying, that I was borne to discouer euery day new kindes of torments for thy sake, and thou to requite them with the greatest rigour in the world. Dost thou now therefore doubt, that thou art the cause of my greefe? If thou art not, who (dost thou imagine) can deserue so great loue as this: or what hart in the world (but thine) had not before this bene mollified and made pitifull by so many teares? And to these I added many other wordes, which now I doe not so well remember. But the cruell enemie of my rest cut off my wordes, saying. If thy toong, Syluanus, fondly presumeth to speake to me againe of these matters, and not to entertaine the time with talke of my Syrenus, I will (at thine owne pleasure) leaue thee to enioy the delight of this faire fountaine, where we now sit. For knowest thou not, that euery thing that intreates not of the goodnes of my Shepherd is both hatefull and hurtfull to my eares? And that she, that loueth well, thinketh that time but ill imploied, which is not spent in hearing of her loue? Whereupon, fearing least my wordes might haue bene an occasion to haue made me loose that great content and happines, that I had by her sweete sight and presence, I sealed them vp with silence, and was a good while without speaking a worde, onely delighting my selfe with the felicitie I had, by contemplating her soueraine beautie, vntill night with greater haste then I desired, came on, when both of vs then were constrained to goe homewards with our flockes to our village. Then